ARGH! Stop asking so many questions! What is this, Jeopardy?! Okay, from the top...

Wade Wilson's mind is kind of a mess. [Cable & Deadpool #8] The regenerative nature of his cells often interferes with his brain's normal functioning, causing a variety of symptoms such as 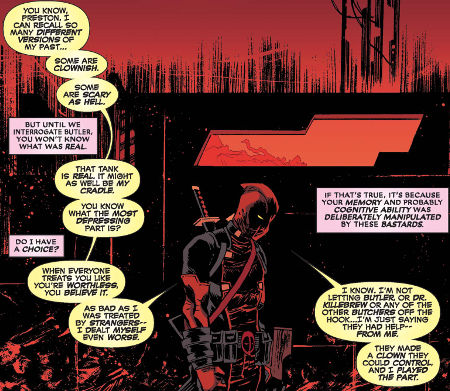 attention deficit hyperactivity disorder, impulse control issues, schizophrenia, mania, hallucinations, short- and long-term amnesia, and so on. Furthermore, for many years after his original departure from the Weapon X Program, Deadpool was recaptured and experimented on by Butler's organization, who warped his mind further with the memory-destroying drug Tabula Rasa and virtual simulations fed into his subconscious. [Deadpool (4th series) #16, 19] This makes his recollections highly inconsistent. On more than one occasion, he has supposedly cleared up his mind and learned the honest-to-gosh truth about his past... and yet these occasions contradict each other. So what's true and what isn't? No one knows for sure.

According to one account, Wade Wilson was a military brat born in Ohio. His father was an officer in the Army and the family moved around a lot between military bases in America and Canada. 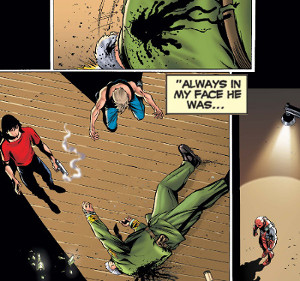 Wade's home life became more difficult once his mother contracted cancer and died when he was only five years old. The distance between Wade and his father grew, and by the time he was a teenager Wade was acting out and hanging with a disreputable crowd. Wade's father came to a pool hall one day to bring his son home, but Wade resisted. One of Wade's punk friends attacked Mr. Wilson with a beer bottle, then grabbed his sidearm and shot him. Wade watched his father bleed out and die on the floor of the pool hall, never resolving the issues between them. [Cable & Deadpool #19]

However, another story indicated Wade's parents were still alive. In this scenario, Wade Wilson was raised alone by his mother and never knew his father. He was a punk growing up, often 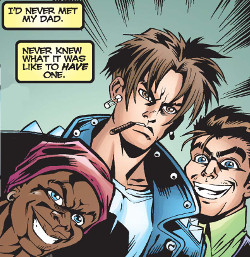 getting into trouble, and his ma smacked him around while at home. She never told him (or never could tell him) who his real father was. [Deadpool (2nd series) #36] The Asgardian God of Lies, Loki, once manipulated Deadpool into fighting Thor by claiming Deadpool was Loki's son and giving him an enchanted facsimile of Mjolnir. When the plot fell through, Loki placed a curse on Deadpool and claimed it would only be lifted once he "doth seek thy father's forgiveness." [Deadpool (2nd series) #37] Sure enough, Wade's life started a downward spiral under Loki's curse. One day, however, Wade met a gruff stranger at a bar and they squabbled over peanuts. Realizing he was being petty, Wade apologized to the older man and passed the peanuts. Minutes later, Deadpool realized Loki's curse had been lifted. The implication was that the man in the bar was Wade Wilson's biological father, a man recognized by the rules of the curse but that he had never known. [Deadpool (2nd series) #45]

Weird, but workable. The details about Wade's past from the second story came from a period when his mind was still screwed up. His recollections could easily have been falsified or corrupted. The only indisputable "fact" is the curse lifting when he met the man at the bar. Working that into the first story, Wade's mom could've had an affair while married to the Army officer. Or she could have been married to the guy in the bar, but when he ran off she got remarried to the Army officer, making him Wade's stepfather.

But then there's the Butler story. During the years that Butler had direct control over Deadpool and his mercenary life, Wade was subjected to brainwashing and mindwiping treatments on a regular basis. As a major test of his control, Butler located Wade Wilson's parents and sent Deadpool and Sabretooth on a job to murder them. Deadpool found the couple asleep in their house, with the implication being it was his childhood home. Despite some vague hesitation, the unwitting Deadpool went through with the assassination, setting the house on fire and rigging it to explode, killing his supposed parents without knowing who they were. Butler's control of Wade started to weaken after that, however, implying that on a subconscious level Wade Wilson knew what he had done. So here, Wade Wilson had grown up with both parents in a relatively normal suburban home in Canada, and they were both alive well into his adulthood. [Deadpool (4th series) #34]

Obviously, these all can't be true. The problem is, each story comes from a moment of genuine clarity in Wade's life. The story of his father dying in a pool hall came out just after Cable psionically fixed Deadpool's cognitive problems, curing his amnesia and "weird brain" at least temporarily. The Butler story firmly implied Wade's life in Ohio was a simulation, but that means Cable would have failed to accomplish what he thought he did with Wade's brain, leaving him with false memories intact when the exact opposite was supposedly happening. As for the guy wanting peanuts, that was supposedly the result of a magical spell objectively responding to the parameters Loki set for it. Loki is the God of Lies, and could have arbitrarily removed the curse at that time just to screw with Wade, but again that clearly wasn't the intent. And the story of Wade killing his parents arose in part from a literal "truth bomb" when the Watcher's eye imparted the knowledge onto another person.

One history that has been thoroughly debunked, however, is that proposed by Deadpool's arch-nemesis T-Ray. Under this version of Deadpool's history, Wade Wilson met his wife Mercedes at Calgary University when they were both studying philosophy. They became teachers together and 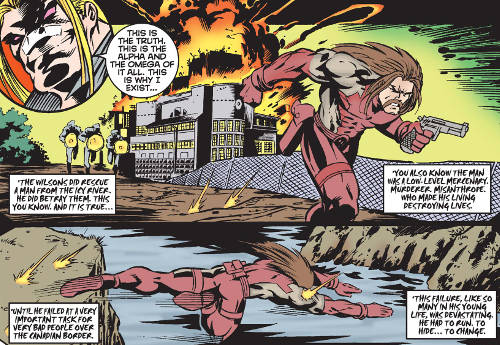 lived off the grid in a beautiful rustic cabin out in Maine. They found a man drowning in a nearby river and brought him to the cabin to nurse him back to health. The Wilsons were trapped in the cabin with the man for a week because of a snowstorm. He turned out to be a mercenary who killed Mercedes and tried to kill Wade as well, shattering their happy life.

For a time, Deadpool believed his nemesis T-Ray was that mercenary and hated him for it. T-Ray eventually revealed, however, that HE was the REAL Wade Wilson and DEADPOOL was the mercenary named "Jack" who killed Wade Wilson's wife. Jack was mentally unstable and often stole identities from other people, a chameleon who abandoned his own past when times got tough and assimilated a new past to replace it. Jack wanted to disappear after the job he botched, and decided to replace Wade, taking his life and wife. When the storm let up, Mercedes drove off to get help for Jack's remaining injuries. Jack planned to kill Wade and start a fire, burning them both beyond recognition. Their similar builds and his study of the couple would let him pose as Wade Wilson after the reconstructive surgery and skin grafts. 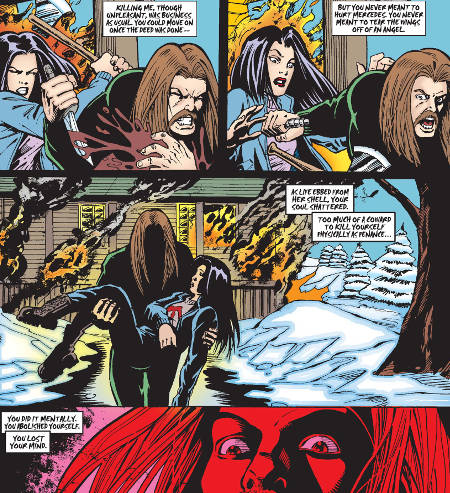 Mercedes returned home early, however, and tried to fight off Jack. He accidentally struck out and murdered Mercedes as he was killing Wade, and was overwhelmed with guilt. Unable to step into Wade's marriage and unwilling to remain as Jack, he retreated into madness, casting a false personality where he believed himself to be Wade Wilson, and re-imagined the details of that day as a tragedy that happened TO him, not because of him. Meanwhile, the real Wade Wilson survived and learned the black arts as T-Ray to one day seek his revenge. [Deadpool (2nd series) #31-32]

This version of Deadpool's past was aggressively ignored by everyone for years until Cable helped Wade get his head on straight. Deadpool confronted T-Ray with several errors in his story, such as Jack wearing a Deadpool costume pre-Weapon X and the

Wilsons reportedly being high school sweethearts yet also didn't meet until college. T-Ray did demonstrate an ability to manipulate memories in others, and Deadpool's mind was hardly clear in the first place. Although T-Ray never admitted he was wrong or lying, Wade Wilson ended their encounter confident of his own identity. [Cable & Deadpool #39]

Fortunately, at this point Wade's memories have been fully restored and his mind cleared up. Under no circumstances will there ever be any further confusion raised about his history or origins in the future. [citation needed]