Deathbird spent the next few months fighting against the rebellion’s influence and trying to maintain a united empire. Unbeknownst to her, the Starjammers and Xavier were replaced at some point by some shape-shifting Warskrulls. The real Xavier was being held captive and he used what little power he had left to reach out and call for help. Out of all the possible people he could have made contact with, he found himself drawn to Deathbird and so he subtly influenced her subconscious to seek out the X-Men on his behalf. Not knowing why she wanted to contact the X-Men, she tracked down the teleporter Lila Cheny and manipulated her into fetching them. When the X-Men appeared before her, Deathbird subdued them and declared that they were needed to kill Professor Xavier. The X-Men naturally put up a fight and eventually overpowered Deathbird’s Imperial Guard, thanks to the arrival of the Starjammers. 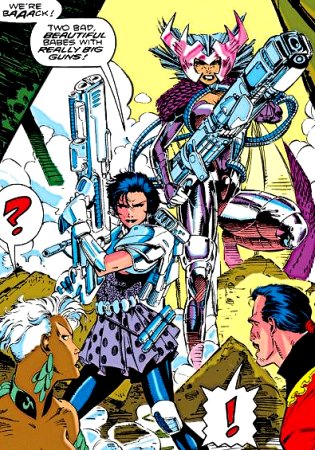 The Skrull Xavier had been using his mental powers to influence Lilandra and make her his pawn. With Deathbird under their control, Lilandra forced her sister to sign over control of the Shi’ar Empire to her. With a mind-controlled Lilandra now doing their bidding, the Skrulls were essentially in control of the Shi’ar Empire. Gladiator, the leader of the Imperial Guard, was also mind controlled by the Xavier Skrull and was forced to rip Deathbird’s off wings. She was about to be killed by him when some X-Men burst in and saved her life. Despite showing off her formidable fighting skills, she was no match for Gladiator’s unparalleled strength and was knocked out. Luck was on her side again, though, when Lila Cheney appeared and teleported her away. After arming themselves, the two women teleported back into the fray, rescuing a bunch of X-Men, who had finally realized something sinister was going on.

The roles had been reversed and now Deathbird found herself leading a rebellion against her sister in a bid to get her empire back. She took her group to a deserted planet and explained to them that it was once a home planet to an alien race that the Skrull Xavier had wiped out. In an uncharacteristic turn for her, Deathbird begged for the X-Men’s help to put an end to the devastation the Skrulls were causing. The group prepared themselves and then attacked the spaceship the Skrulls were using. The fight was brutal and confusing, as no one knew who was mind-controlled or a Skrull. Deathbird’s heroic side seeped through again when she saved Storm’s life by attacking Lilandra. The Skrulls were eventually defeated and the mind-controlled Lilandra began to regain her senses once more. Despite signing the abdication document under torture, Deathbird decided to let it stand and allow Lilandra to remain as Majestrix. She declared she had grown tired of the weight of power and that a fitting revenge would be to let Lilandra have it. [Uncanny X-Men (1st series) #269, 274-277]

The Shi’ar Empire had maintained a peace treaty with the Kree Empire for many years but recent expansions on both sides had strained that relationship. Perhaps Deathbird’s recent rule was the tipping point but, for whatever reason, the two sides were on the brink of war. When the conflict threatened the safety of the 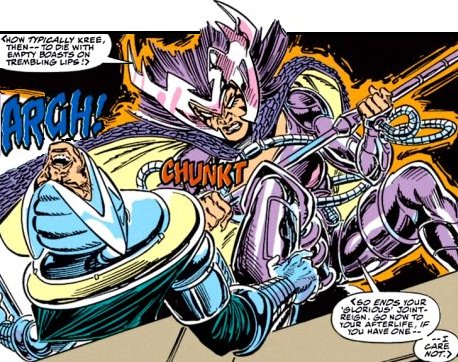 Earth, the Avengers became involved and things escalated quickly. Despite recent history, Deathbird still kept an eye on her sister and came to her with an offer of help. She may have been a questionable ruler but no one could deny her cunning mind and deadly skills. Whilst the various factions were concerned with finding an end to the conflict, Deathbird snuck onto the Kree home world of Hala and assassinated two of the Kree leaders.

Since they happened to be on the planet at the same time, the Avengers became implicated in the assassinations. Hawkeye was tasked with tracking down Deathbird and he soon found her sneaking through the underground tunnels. He convinced her to reveal the truth but it would all be in vain, as Lilandra triggered the detonation of a Nega-Bomb.

The explosion killed 90% of the Kree population and ended the war in an instant. Deathbird survived the explosion and even she was shocked the depths her sister would go to end the war. Finding a Kree temple, she decided to mourn the dead and while there happened to find Captain America unconscious on the floor. They were soon joined by the Kree ruler, the Supreme Intelligence, who revealed some startling information to the duo. Deathbird discovered the Intelligence had manipulated both her and Lilandra and caused the war that ended the lives of so many. Deathbird was disgusted that the ruler would allow his own people to die but she was unable to do anything to defeat him. 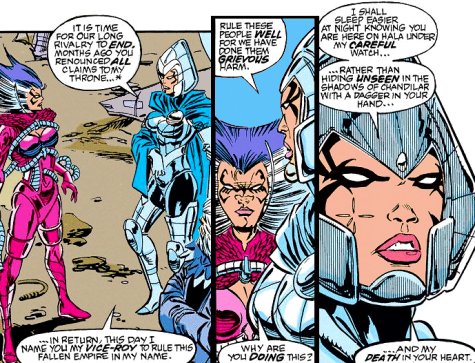 Later on, Lilandra arrived and declared that the Kree would now be absorbed into the Shi’ar Empire. In a surprising twist, she announced that Deathbird would be the Vice-Roy to the Kree Empire and she would even have her own version of the Imperial Guard. Deathbird was shocked but Lilandra cunningly pointed out that she would rather know what her sister was up to rather than have her sneak in the shadows with a dagger. [Operation Galactic Storm crossover]

[Note: Soon after these events, a Shi’ar woman called Deathcry appeared and indicated she was Deathbird’s daughter. She shared a remarkably similar physical appearance to Deathbird, which helped support the theory given the genetic throwbacks are rare in the Shi’ar. During the Chaos War: Avengers miniseries, Deathcry appeared once more and Lilandra referred to her as her niece, all but cementing the theory. Deathcry never appeared on panel with Deathbird and, now that she is dead, it seems unlikely we will ever have a certain answer about their relationship]

Deathbird had an unenviable job leading a people who resented the Shi’ar for their part in the near genocide of the species. Nevertheless, she managed to gather as many survivors as possible and began the long road to rebuilding their lives. When the ex-Avenger Quasar wandered into her territory looking to help the survivors, she angrily informed him that his help wasn’t needed. [Quasar #35] 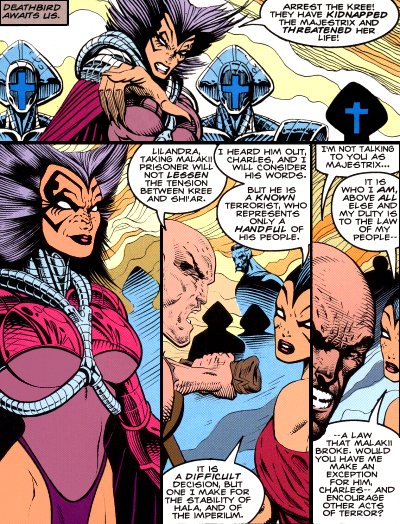 Of course, there was resistance to the Shi’ar rule and, during the ceremony to induct the Kree Empire into the Shi’ar’s, Deathbird was almost killed by an explosion set by Kree dissidents. Charles Xavier and his X-Men were on hand and, with Lilandra's aid, were able to seek out the rebels.  While in their company, Lilandra came to a better understanding of their motivations and recent actions. When Hala was threatened due to their mislaid plans, the dissidents aided the X-Men in averting disaster.  When they returned, Deathbird and her troops called for the immediate arrest of the traitorous Kree. Though Lilandra realized that the Kree rebels were not evil, she had no choice but to hold them fully accountable for their terrorist attacks and the attempt on Deathbird's life, despite protests from Xavier and his students. To Deathbird's deep satisfaction, Lilandra's decision deepened the growing rift between her and Xavier and served as a sharp reminder of the sacrifices necessary to rule.  [X-Men Unlimited (1st series) #5]

When a hidden alien race called the Inciters began manipulating events that would cause the destruction of the galaxy, Deathbird found herself coming to blows with the Ms. Marvel and X-Men once more. Ms. Marvel, now called Binary, had lost control of her energy manipulating powers and was in danger of causing a super nova. Deathbird ordered Binary’s execution and, when the X-Men intervened, she also demanded their deaths for an earlier transgression against the Shi’ar. Deathbird was forced to halt the execution on Lilandra’s orders, much to her chagrin. When the Silver Surfer was implicated in the destruction of another planet, the attention turned to him. The X-Men defended the Surfer and believed there was something amiss but Deathbird was nevertheless adamant the Surfer should pay. Beast reminded Deathbird that the Shi’ar themselves had destroyed their own fair share of planets in the name of the empire, hinting at the destruction of Hala. Deathbird was outraged that he would dare speak to her like that and she shocked him with a powerful electric blast. Eventually, Deathbird was made to see everyone was being played for fools by the Inciters and she reluctantly teamed up with them to put an end to their schemes. Afterwards, Lilandra and Deathbird decided to keep the existence of the Inciters a secret from the greater population, for fear of repercussions. [X-Men Unlimited (1st series) #13]