Despite having the youthful looks of a man in his 40s, Dr. James Nicola Bradley is actually over 100 years old, having been born at the turn of the 20th century in San Francisco. The events surrounding his birth were somewhat turbulent, with his parents, Dr. Nicola and Catherine Bradley, caught up in a battle with the Hellfire Club. James’s father Nicola had invented a generator battery that had the potential to change the world, but he had come under attack from those who would steal it from him. By chance, a time travelling group of X-Men, including the adult James Bradley, had arrived in San Francisco looking to make contact with the couple. Despite the X-Men’s best efforts, Nicola saw no way of keeping the generator out of the Hellfire Club’s hands and so he chose to destroy it. In the ensuing explosion, he was killed by a flying piece of metal and died before his son was born. 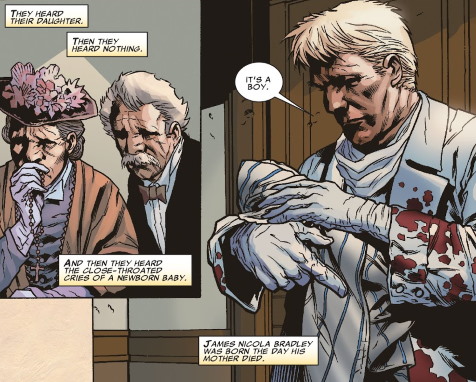 Traumatized by the loss of her husband, the pregnant Catherine was confined to bed rest to protect her child, and on December 1st 1906 she gave birth to a healthy baby boy. The adult James Bradley, a doctor in his own rights, travelled back in time to help his mother give birth to himself. Tragically, despite his best efforts to save her, Catherine Bradley died in childbirth, leaving the infant James an orphan. [Uncanny X-Men (1st series) #512]

James grew up in the care of his grandparents and it became apparent he possessed a great intellect to rival that of his father’s. In fact, James’s heightened intelligence came from the X-gene, making him one of the first known mutants of the modern era. James’ scientific mind and curiosity caused him to create a number of serums that he often tested on himself. One of these slowed the aging process down in his body, giving him an extended lifespan. James went on to become a surgical doctor, as well as keeping a keen interest in all scientific pursuits from chemistry, to biology, to robotics.

It was the latter field that brought him to Professor Phineas Horton, and in the 1930’s the two began to develop a human-like android. The two men would come to blows when it was discovered the android kept on bursting into flames when exposed to oxygen. Dr. Horton wanted to present the android to the world, but James refused to have his name on a defective machine and so he broke off the partnership. Dr. Horton went on to find fame with “the Human Torch,” while James took a second, uncompleted android away with him to try to perfect it. [The Invaders (2nd series) #3]

By the mid-1930’s, James was working as an intern at Mercy Hospital. Due to his workload, he was forced to side-line the android project and concentrate on his true passion of chemistry. He managed to create a truth serum, a chemical that would put people into a trance which compelled them to speak the truth. Aware of the dangers of such a chemical, he kept it a

secret but the temptation to use it soon arose. When helping tend to some victims of a train accident, James met a man who was being transported to prison. With a gut instinct that the man was innocent, James used the truth serum on him to discover the man really hadn’t committed the crime of which he was accused. He decided he had to prove the man’s innocence, and so James left a card in the prisoner’s pocket declaring his intentions. Knowing he couldn’t go snooping around as himself, he chose the name Doctor Nemesis and equipped a surgical mask to hide his identity. Using his truth serum, Doctor Nemesis found the real culprits and proved the prisoner’s innocence. [Lightning Comics (1st series) #6]

[Note: Lightning Comics was one of many titles published by Ace Magazines during the 1940’s and 50’s, which should be noted was not affiliated with Marvel Comics. The company went out of business in 1956 and all the characters that had been created remained unused for decades and eventually entered the public domain. Marvel picked up Doctor Nemesis for the 1993 Invaders series and used his likeness and character traits for their own version, although they did initially change his codename.]

By the end of the 1930s, war had broken out again, now in both the Pacific as well as Europe. By the time this Second World War dragged in the United States, James had started to become disillusioned with society and the way he had been treated by Dr. Horton. The Nazi forces were looking to destabilize the USA and remove them from the war, and so they approached James and asked him to join their side. He agreed and, under the orders of the Third Reich, set up his own villainous team called Battle-Axis and recruited a number of other disillusioned super-heroes into its ranks. With the vast resources to which the Nazis had access, James was able to complete the android project he started years before. He named the finished product Voltron, and enrolled him into Battle-Axis too. 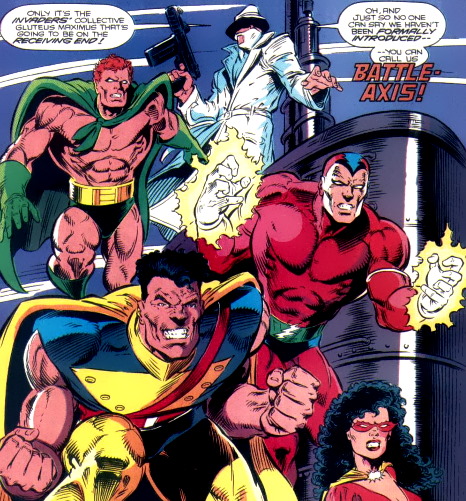 With his new, darker demeanor, James took to calling himself Doctor Death and seemingly had no problem in injuring or even killing anyone who got in the way of his efforts. He soon devised a plan, codenamed Project Mojave, that would remove the USA from the war. Using a device he created himself, he would set off a large earthquake near California, which would create so much destruction that the USA would have to concentrate on its own recovery efforts. The quake would also damage any military installations involved in the war, putting an end to the country helping out at all. Knowing that his plans would likely be stopped by the Invaders, the USA’s top super-hero team at the time, Dr. Death decided to strike first to eliminate their threat. This part of the plan had a silver lining for James, as the Human Torch was a member of the Invaders and James would finally get a chance to reclaim his co-creation once more.

James and the rest of Battle-Axis clashed with the Invaders a few times as they made their way to California, even capturing the Human Torch in the process. Taking the Torch to a secret base under the Mojave Desert, James revealed his part in the android’s creation. The rest of the Invaders weren’t far behind and they broke into the base looking to stop Dr. Death. James had one more trick up his sleeve, though, and started up a device that could rip a hole into another dimension. He summoned Aarkus, the Destroyer of Evil, to Earth and commanded the otherworldly being to subdue the Invaders. With no one left to stop him, it seemed that James’s plan would work. However, it turned out his own lies would come back to haunt him. 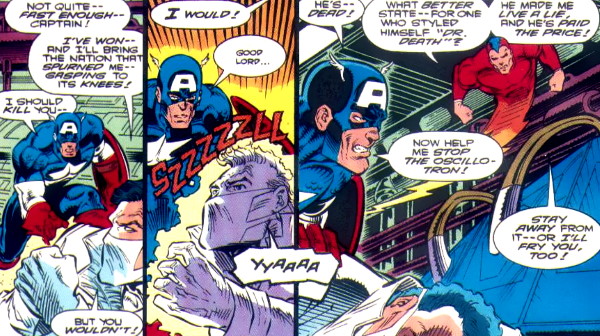 Despite him creating Voltron, he had never informed the android of his true nature. Instead, he lied and said he was a human man who suffered from amnesia due to a lightning strike. After fighting Voltron, the Invaders realized he wasn’t human and informed him of the fact, causing the android to lash out in anger. Dr. Death was seconds away from triggering the earthquake when he was stopped by the Invaders and seemingly killed by Voltron, his own creation. After destroying all the equipment in the base, the Invaders left, having thwarted James’ and the Third Reich’s plans. [The Invaders (2nd series) #1-4]