The team split up in the hopes that the situation would die down in the meantime. Nemesis found himself stuck with Forge as a companion and the two quickly made a wager as to which of their crazy science experiments could beat the other’s. While Forge used his abilities to create an enormous, robotic gorilla, Nemesis mutated a scorpion into a giant-sized version of itself. Unfortunately for him, the scorpion was no match for the mighty gorilla and Nemesis was forced to concede. Afterwards, Cable approached Nemesis and asked him to continue serving on X- 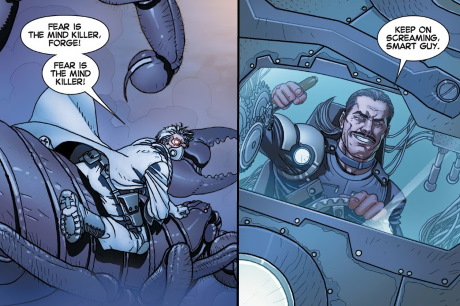 Force while they sorted the situation out. Nemesis had many objections, given now badly their first mission went. However, when he heard that Cable was in need of a spaceship, his scientific interest (as well as his love of Star Trek) was piqued and he reluctantly accepted. Nemesis got his wish and he helped steal an alien ship from S.W.O.R.D. before flying into space with it. [Cable and X-Force #5-8]

Cable’s visions were coming thick and fast, so much so that he started hemorrhaging when he got them. Doctor Nemesis did all he could for Cable but, with each episode his brain swelled even more. The team split up again when they were attacked by the Avengers, looking to arrest them for the incident at the meatpacking plant. Nemesis ended up with Forge again, and the two were given instructions on defeating a creature from one of Cable’s visions. After meeting up with the rest of the team afterwards, he discovered Cable had been arrested by the Avengers. Despite the odds being against them, the team managed to free their leader, thanks to a giant sandworm that Nemesis quickly created to aid them in battle.  [Cable and X-Force #10, 13-14] 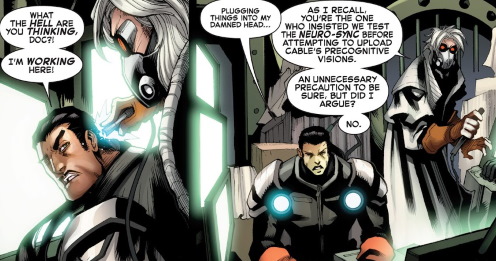 The team headed to a new headquarters, an underground bunker in Montana, while they recovered from their battle with the Avengers. In a bid to help Cable out, Doctor Nemesis created a device that could map out someone’s mind and allow the user to walk through it. Using Forge as a test subject, Nemesis managed to sync his mind up to the base’s computer system, giving him full access to his teammate’s mindscape. Unbeknownst to himself or Forge, this mental intrusion unleashed the Adversary, an evil entity Forge had fought and seemingly defeated years before. A part of the Adversary had hidden in Forge’s mind and, thanks to Nemesis’ device, was now free and it immediately possessed Forge. Seeing the immense reality-warping powers the Adversary possessed, Nemesis had to think quickly and used another device to enter Forge’s mind himself.

Once inside, Nemesis found Forge’s consciousness and got the details on who the Adversary was. Knowing that they couldn’t defeat him physically, as that would kill Forge, Nemesis attempted to come up with a plan to defeat the Adversary in Forge’s mind. It was easier said than done, as the Adversary proved to be incredibly powerful, driving Forge to the realization that the only way to defeat him would be to kill his own physical body. Nemesis was fully against the idea of killing his own teammate, so he managed to contact Boom Boom in the real world for assistance. She was busy fighting the Adversary-possessed-Forge herself, but Nemesis convinced her to flip a switch on his device that would pull him out of Forge’s mind and allow him to come up with a better plan.

Things didn’t go smoothly though and, instead of Nemesis going back to the real world, all of them ended up inside Nemesis’ own mind. Even though it wasn’t the result he was expecting, Nemesis realized that he could defeat the Adversary. As Nemesis’ mutant power was his mind, it was exceedingly more powerful than the Adversary anticipated. 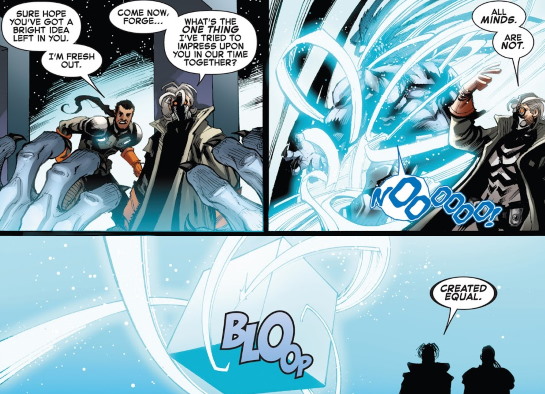 Nemesis was able to take control of the evil entity, trap it within a box and lock it away in a dark corner of his consciousness. With the threat over, both he and Forge were able to return to the physical world again, although Nemesis now carried the burden of the Adversary in him. [Cable and X-Force #15-17]

Nemesis and X-Force were soon dragged into a battle with Cable’s clone, Stryfe. After teaming with Storm’s own X-Force team, the situation was resolved and the various members of X-Force went their separate ways. [Vendetta crossover] 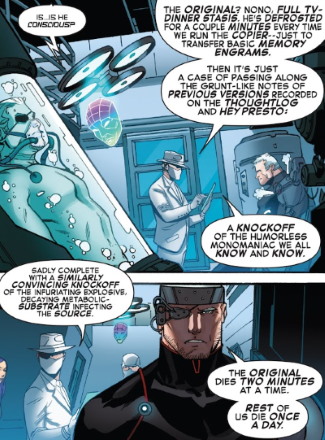 Cable had need for Doctor Nemesis’ science skills once more when he became infected with a bio-serum called the “Volga Strain.” Cable only had 24 hours left to live before his body exploded and so he put himself into stasis whilst Nemesis worked on the cure. Hope Summers had also been infected with a pseudo-version of the serum and she too was comatose whilst Nemesis worked to recreate the serum in a bid to understand it. Wanting to track down those responsible himself, Cable had Doctor Nemesis create a cloning system, that allowed Cable to make a clone of himself, complete with the Volga strain, each day. At the end of the day, the clone would die and Nemesis would upload its memories into the real Cable and then create a brand new clone. Whilst Nemesis started out as the new X-force’s support, he quickly became involved in their missions and even helped save the day when they took on Volga himself. [X-Force (4th series) #1-6]

Nemesis stayed with X-Force whilst they fought against the likes of Mojo, MI: 13 and a crazed Fantomex. Eventually, Cable and Hope’s situation was sorted out and, though the team decided to stick together for a while, they ultimately disbanded. [X-Force (4th series) #7-15]

Doctor Nemesis parted ways with the superheroic lifestyle for a while, but was soon tempted back into it by the Black Panther, who was setting up his own Agents of Wakanda. Much like X-Club, the Agents of Wakanda were some of the best and brightest minds across the world and their mission was to act as a support network for the Avengers, gathering intelligence and solving some of their trickier problems.[Avengers (7th series) #12] 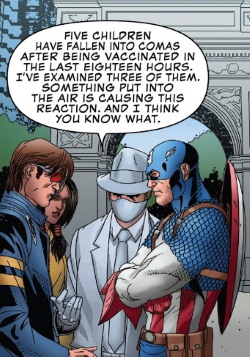 He did return to the X-Men briefly when Jean Grey sent out a telepathic distress call, as the team was fighting against X-Man. He was one of the few mutants to survive the battle that seemingly wiped out the entire X-Men. In the wake of the catastrophe, the government developed a vaccine for the X-gene and began to administer it to the population. When those given the vaccine slipped into a coma shortly thereafter, the Avengers decided to investigate. As part of the Agents of Wakanda, Doctor Nemesis was called upon to look into it and he discovered an airborne “cure” to the vaccine had been released. The cure was faulty and it was causing some of those who’d had the vaccine to fall ill. Teaming up with Captain America, Nemesis confronted Cyclops, Magik and Moonstar, some of the few remaining X-Men, about the cure. Cyclops admitted to releasing the cure but was shocked that it was making people ill. Before Nemesis could object, Magik teleported him away to the X-Men’s base, where he discovered they had Dark Beast locked in a basement. The evil scientist had created the cure but, when confronted, revealed that he had known it would make some people sick. Magik killed Dark Beast, leaving Doctor Nemesis to go through his notes to develop a cure for the cure. [Uncanny X-Men (5th series) #9-10, 20-22]

Pulling double duty on the X-Men and Agents of Wakanda, Doctor Nemesis’ genius has never been needed so much.