Born in Calcutta, India, the young Kavita Rao wanted nothing more than to become a doctor so that she could change the world. Shunning any distraction that came her way, Kavita threw herself into her studies and easily excelled at genetics, so much so that she ended up travelling to both America and England to further her academic goals. It wasn’t long before she was drawn into the field of one of the newer, yet controversial subjects, that involving the mutant x-gene. [Second Coming – Revelations: Blind Science #1]

At the time, the mutant race was under threat from the Legacy virus and Kavita worked tirelessly to find a cure to no avail. Although a cure was eventually found by someone else, Kavita’s research hadn’t gone unnoticed. One day, she was approached by Abigail Brand of SWORD and an alien named Ord from the planet Breakworld, who had heard about her advanced understanding of the X-gene. Explaining that there was a prophesy that a mutant would destroy Breakworld, Ord intended on wiping out the mutant race to ensure it never came true. Rather than have an intergalactic incident on her hands, Brand enlisted Kavita to create a serum for the X- 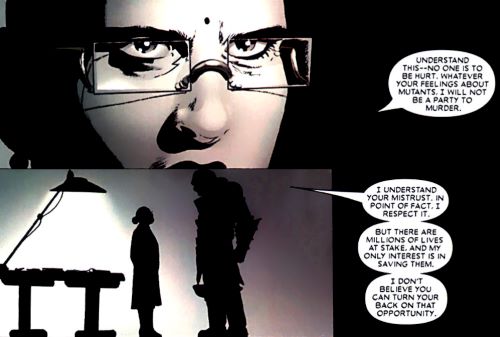 gene, one that would eliminate the mutant threat without the need to an interplanetary war.

Forming a company called Benetech, Ord gave Kavita as much money and resources as she needed to further her research until the point she could create the so-called “cure” for the X-gene. Although Kavita’s intentions were honorable, only wanting to help mutants who were a danger to themselves of others, she knew deep down what the consequences of a cure for mutants could really mean. Trying to be as ethical as possible, Kavita only studied on mutants who had either killed themselves, or voluntarily agreed to take part in the study. Her dedication paid off and she successfully created a serum that would nullify the X-gene’s effects in a host.

Although she still had a long way to go to test it out, Benetech nevertheless held a conference to announce their breakthrough cure to the world. Dubbed the “Hope” serum, the cure understandably rocked the mutant community to its core, so much so that the X-Men decided to look into Benetech, and Kavita, personally. Beast broke into Benetech’s labs and confronted Kavita, but she remained steadfast in her belief that the cure could save lives. She agreed to share her research with him so that he could verify it and hopefully gain the cooperation of the X- 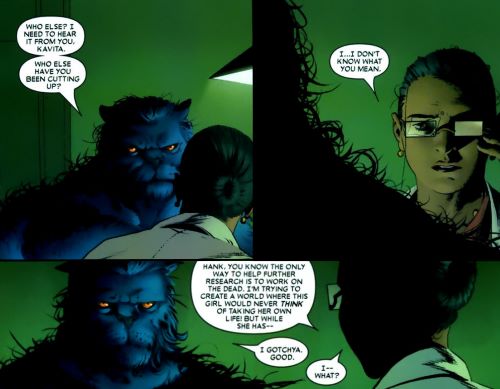 Men at the same time. It was a move that angered Ord, and he threatened Kavita if she stepped out of line again.

Unbeknownst to Kavita, Beast’s investigations into her cure identified some of the mutants she had used as test subjects. One of these was former X-Man Colossus, who had died curing the Legacy virus some years before, but whom Ord had secretly resurrected him for study. The X-Men stormed Benetech Labs looking for Colossus but faced fierce opposition from Ord and Benetech’s security. Caught in the middle of the two sides, Kavita only wanted to protect one of her test subjects, a young girl named Tilde. Ord was soon captured by the X-Men and SWORD, and Kavita’s plans for the cure were destroyed along with Benetech’s labs. [Astonishing X-Men (3rd series) #1-6]

After Kavita’s collusion with Ord was revealed to the world, she was shunned by the scientific community and became an outcast. Things got worse for her when the Scarlet Witch depowered almost all the world’s mutants on M-Day, effectively making all of Kavita’s life work obsolete. 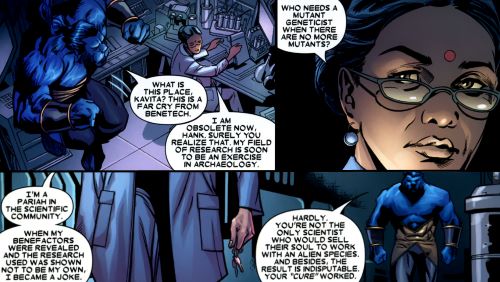 Whilst Kavita was more than content to wallow in her self-pity, Beast was working diligently to reverse the effects of M-Day. He approached many of the world’s most renowned scientists but none had a clue how to solve the situation. Eventually, he resorted to asking the shadier members of the scientific community, of whom Kavita was now apparently a member. Whilst most of them ignored Beast’s pleas for help, Kavita felt she owed the X-Man a huge debt and vowed to give him all the information he needed. The two met up and she explained that she had known Ord’s method were questionable, she just wanted to get results and didn’t care how she got them. Feeling tremendous guilt over her actions, she handed Beast all her research and declared she was going back to India to start a new life. [X-Men: Endangered Species]

Kavita wouldn’t stay in India for long, however, as she was soon approached by Beast once again, only this time he had an offer for her. His research into the effects of M-Day had hit a dead end and he decided to set up a dedicated group of scientists that would look into it, as well as help the X-Men. Still feeling the need to redeem herself, Kavita accepted Beast’s offer and officially join the X-Club, along with Madison Jeffries, Doctor Nemesis and Dr. Yuriko Takiguchi.

Setting up home in the base in San Francisco, Kavita and the team soon got to work and devised a plan to look into the origins of modern mutants. Travelling back 100 years, the group met with Doctor Nemesis’ parents and obtained a blood sample from them, whilst also thwarting the schemes of that period’s Hellfire Club. [Uncanny X-Men (1st series) #508-509, 512]

When Norman Osborn waged war on the X-Men, it became apparent that staying at their current base in San Francisco wasn’t an option for the X-Men. Kavita and the rest of X-Club worked around the clock to raise the remains of Asteroid M, one of Magneto’s former bases, from the seafloor. Now floating off the coast of San Francisco, the new island was nicknamed Utopia and the X-Men set up home there, declaring themselves their own, sovereign nation. Kavita joined the group there, showing the world that her allegiances now lay with the mutants. [Utopia crossover]

As well as her work with the X-Club, Kavita’s vast medical knowledge came in handy as she had fallen into the role of the X-Men’s doctor. She was on hand to help Karma out after an incident with Legion, as well when Magneto came to the island, looking to join the team. [New Mutants (3rd series) #5, Uncanny X-Men (1st series) #518]