The X-Men faced numerous threats when they moved to Utopia, but they were all forced to fight for their lives, Kavita included, when the robot Bastion unleashed his might on them. Wanting to eradicate all the remaining mutants, Bastion had been growing his forces and preparing for every eventuality, ready for the final fight with the group. The X-Club were one of the many factors he had accounted for and Bastion managed to trick the team into leaving Utopia to investigate a mysterious oil rig off the nearby coast. When Kavita and the team arrived, they realized a little too late that it was a trap. The computer systems on board started a countdown and, whilst the rest of 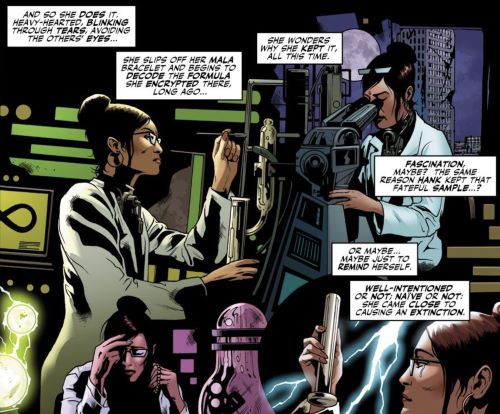 the team leapt into action, Kavita froze in terror. Her life flashed before her eyes and she remembered all the things, good and bad, she had accomplished in her life.

When the timer hit zero, Kavita was surprised to find herself transported to a dystopian world. Finding herself in the middle of a fight between an older, human-looking Hank McCoy and a bunch of strange creatures, Kavita was stunned when McCoy declared that she was the key to saving them all. He explained that Hope Summers, the so-called mutant messiah, was the reason the world was in such a bad way, but if Kavita could recreate her cure serum then they all might stand a chance. Kavita was outraged that she was being asked to wipe out an entire species once again and came to blows with Doctor Nemesis over the ethics of it all. Eventually, the others won and Kavita reluctantly set out to recreate the cure. Despite it bringing back a lot of bad feelings, she managed to succeed, and the group set out to use it on Hope.

Kavita was adamant that she should be the one to shoot Hope with the cure but, when it came to the moment of truth, she couldn’t go through with it. Instead, she handed it to McCoy so that he could do the deed. However, as she did so, McCoy and the entire environment vanished before her eyes. She and the others found themselves back on the oil rig, only this time they were surrounded by Bastion’s forces and Graydon Creed. It was Doctor Nemesis who first figured it out that the three of them had been tricked by a holographic scenario in the hopes that Kavita would recreate her serum for them. As he gloated, Kavita corrected him and declared she knew what 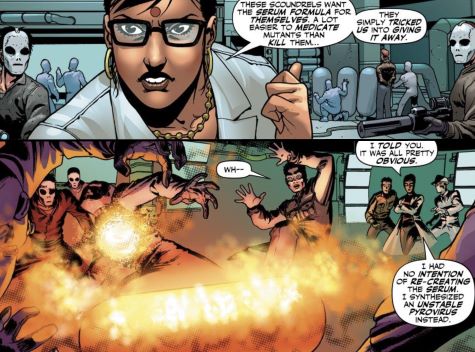 was going on all along and she had turned the tables on their captors. The serum she created was in fact a pyrovirus, which subsequently ignited when Graydon’s men tried to steal it.

Kavita and the others managed to escape the burning oil rig before it exploded, having thwarted Bastion’s back-up plan to rid the world of mutants. As the three of them floated in the water, they were helpless to watch as a giant force field was erected over Utopia, trapping the X-Men in there. X-Club worked hard to try and free their teammates, but in the end it was the X-Men and Hope Summers who destroyed the force field and defeated Bastion. [Second Coming crossover] 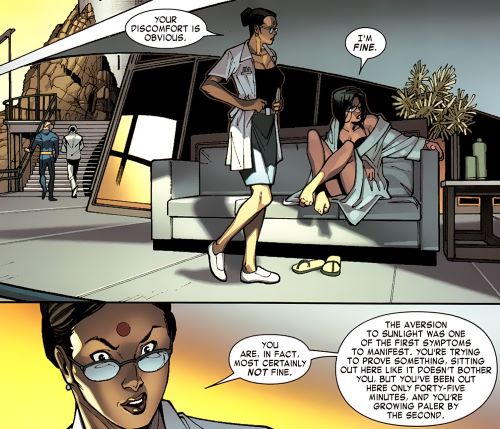 Kavita didn’t get much time to rest, as the X-Men soon came under attack by a horde of vampires looking to turn them all into bloodsuckers. Jubilee was one of the first to be infected with the vampiric virus and Kavita did her best to understand the changes she was going through. Deciding they needed a test subject, the X-Men captured another vampire for X-Club to study and it was locked in Utopia’s labs. Unfortunately, the X-Club underestimated the creature and it managed to escape, causing Doctor Nemesis to put the lab on lockdown.

As well as the Jubilee, Kavita had also been caring for a number of humans who had also been infected with the virus. Kavita found herself in a horror movie, as she attempted to protect the humans from the vampiric stalking them through the labs. Along with Madison Jeffries, she managed to create a serum that would disable the vampire long enough for them to kill it. Despite her best efforts, though, she was unable to fully cure someone of the vampiric virus, as its nature was well beyond the limits of science. [X-Men (3rd series) #1-6, X-Men: Curse of the Mutants - Smoke and Blood #1] 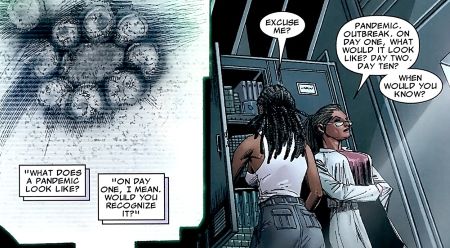 There was no end of patients for Kavita to care for on Utopia, ranging from Kitty Pryde (who was stuck in her phased state), to a bunch of newly emerged mutants who were still understanding their powers. Perhaps the most worrying, though, was a seemingly innocent flu virus that was making its way though the X-Men. Whilst the others didn’t think much of it, Kavita began to get concerned at the amount of people who were coming down with it. Her worries were justified when it was revealed that the strain of the flu was a particularly dangerous one encountered by Wolverine a short time before when he infiltrated Sublimecorp’s headquarters.

The island was immediately put under quarantine and Kavita found herself working around the clock to deal with the infected. It became apparent that the virus only infected mutants, and, when it did so, it also nullified their powers. Whilst Kavita hadn’t contracted the virus yet, she couldn’t be sure humans were immune to it entirely. Despite the risk, Kavita injected herself with a concentrated dose of the virus to monitor the effects. Fortunately for her, she didn’t contract the disease, supporting the theory that it was a mutant-only plague. In the end, it was revealed that the virus was man-made and was being controlled by a man named Lobe. The X-Men confronted Lobe and tricked him into purging the virus from everyone’s bodies, putting an end to the mutant plague. [Uncanny X-Men (1st series) #529-534]

Things went back to normal, by X-Men standards at least, and Kavita was kept busy with the aftermath from when Legion warped reality to create the Age of X. Although things returned to the way they were, many of the X-Men were traumatized by memories of the reality that had been inflicted upon them. Kavita had to conduct psychological tests on many of them and care for those who had lasting physical effects, such as Chamber and Hellion. [X-Men Legacy (1st series) #248-249]

When Wolverine left Utopia and set up a new school in Westchester, Kavita chose to stay on Utopia with the rest of the X-Club. [Astonishing X-Men (3rd series) #44]

Doctor Nemesis and Madison soon began working with a company called Stratocorp, who were creating an elevator to space. As there was no biological aspect to it, Kavita’s skills were not required, leaving her feeling a little left out. That all changed at the launch of the elevator, when a group of Atlanteans used press coverage as an opportunity to protest the machine. Complaining of a mysterious “dark force” in the water, one of the Atlanteans went insane and literally blew up. 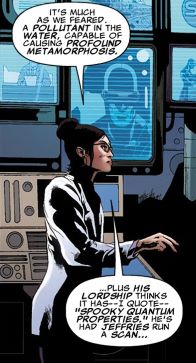 Kavita immediately began to investigate the ocean life around Utopia and discovered that an unstable form of the Inhuman’s Terrigen was polluting the local environment. The sea creatures had all begun to display incredible powers, but effects were unstable and many were dying. Kavita found a willing test subject when the wife of the Atlantean who had died volunteered to be studied. The woman’s calm demeanor perplexed Kavita, even when she was informed that she would likely die if a cure were not found. Her belief in the god Neptune gave her comfort and she saw everything that was happening to her as part of a grand plan.

Kavita could not understand the view as she had abandoned religion years before, relying on a belief in science to get her through the tough times. Nevertheless, Kavita worked relentlessly to create an antidote for the Terrigen poisoning the woman but it would come too late. The Atlantean’s body could not hold out and she began to exhibit numerous powers before entering a critical state. Kavita tried to make her see how much danger she was in, but the woman saw the powers as a gift from Neptune. She died soon after, with Kavita blaming herself for not developing a cure faster.

In the meantime, Doctor Nemesis had discovered not only that it had been Stratocorp who had unleashed the Terrigen into the oceans but that they were actually being led by a Nazi. Infected with the Terrigen himself, Nemesis had become unhinged from the regular dimension, and had to 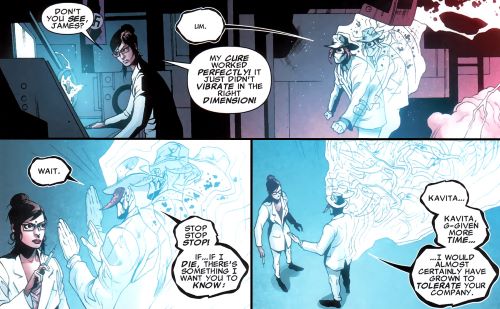 rely on Kavita to save his life. Despite not studying in the fields of physics, Kavita had absorbed enough knowledge from her X-Club teammates to create a serum to stabilize Nemesis in one dimension again. Afterwards, she used the cure to negate the effects of the Terrigen in the oceans, returning the sea life to normal again. The ordeal did have a lasting effect on Kavita, as she had begun to open her mind once again to the possibility of gods and divine inspiration. [X-Club #1-5]

Not long after, the X-Men went to war with the Avengers over the fate of the Phoenix Force, which was returning to Earth. The X-Men were forced to abandon Utopia, and many of those left behind, such as Kavita, were taken to the Avengers Academy so that they could not help their allies. [Avengers Academy #29-31] Afterwards, Utopia was abandoned for good and X-Club went their separate ways. Kavita stayed out of the X-Men’s lives for a while and her activities during this time is unknown. Soon enough, however, she reformed the X-Club alongside her former teammates. Setting up a new base in Costa Rica, Kavita and the group were on hand to help the Weapon X team in dealing with one of their prisoners. [Weapon X (4th series) #11]

Recently, Kavita was seen mourning the death of Wolfsbane, who had been murdered by a gang of men. [Uncanny X-Men (5th series) #17]