Some 800 years ago, Zhilla Char was an arrogant lesser demoness, a succubus who haunted the sleep of lonely men. After consuming the stolen man essence, she would wander the Astral Plane, seeking a private place to digest. Unfortunately for Zhilla, she stumbled into the realm of the demon called Nightmare who raped her and banished her to a barren, lesser realm from which there was no escape. Because of her unique physiology, Zhilla was already about to give birth and would do so in extreme pain. Her kind of demon would give birth by essentially becoming their child, and the child would retain the memories of the mother. As the birthing flames took over, Zhilla did her best to revoke Nightmare's diabolical act, but to no success, as she was re-born as her own daughter. 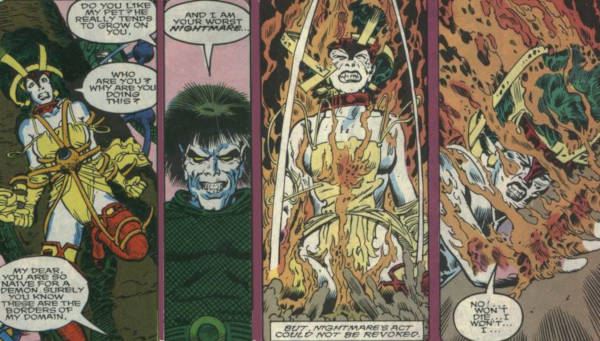 Nevertheless, this young demoness did not hate Nightmare as her mother had willed upon her – she understood that her father gave her life and her own private dimension, which was molded by apathetic intellect. As such, she was able to re-create the dimension to her desire, filling it with brilliant colors, plant life and a citadel where she would reside. She even created people that would serve her and her dark fantasies. Dubbing herself the Dreamqueen, she ruled this realm with an iron grip. Unfortunately, in the years that passed, her dream world became her prison.

450 long years later, the Dreamqueen received a visitor to her realm, the astral projection of the shaman called Nanquato of the (now extinct) tribe Chickaqua. Nanquato had left his physical body in search of the Sky Gods, so that he could plead with them to bring the rains to his drought-stricken people. The Dreamqueen played with Nanquato's innocence and told him that she was one of the gods he sought. She gave him a magic totem, a glowing sphere, to take back to his world, and then the rain would come. The Dreamqueen laughed as Nanquato left her realm and she reveled in her first act of deception – it was a feeling of pleasure that she had never known. The Dreamqueen watched as Nanquato returned to his people and, although she knew her powers on Earth were limited to merely altering perception, she also knew the effects of what would transpire would satisfy her.

Once Nanquato started to chant, the totem that the Dreamqueen gave him opened a portal. While he believed the rains had come, in truth the portal unleashed phantom demons on the tribespeople, putting his people at the mercy of the Dreamqueen, or rather her lack thereof. The

Dreamqueen was able to send a weapon of fear to Earth via the link she had established with Nanquato. However, before the weapon could reach him, a warrior unaffected by the Dreamqueen's hallucinations threw his spear into Nanquato, much to the Dreamqueen's horror.

Nanquato was shocked as to what happened to him and saw the demon projections around the village as the warrior told him he had brought evil to them. The other warriors, now also free from the Dreamqueen's attack, shoved their spears into Nanquato, killing him. To the Dreamqueen's dismay, Nightmare appeared before her to bask in her misfortune. The Dreamqueen asked him to set her free from this realm, but Nightmare enjoyed watching her suffer too much and had no intention of freeing her. Additionally, as their powers were similar, he didn't want her competition. The Dreamqueen informed her father that she had managed to get a totem to Earth and that, if one of villagers touched it, they would fall under her control, then she would be able to forge a 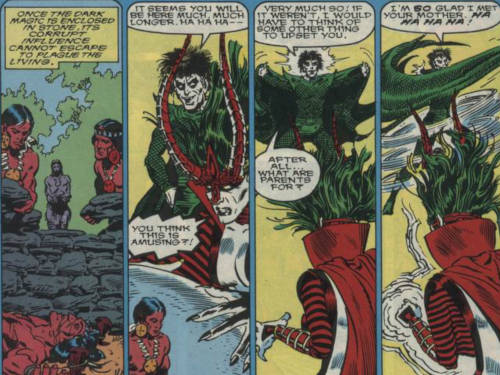 new connection and escape this reality. Further complicating her plans, however, the Dreamqueen was told by her father that he gave that warrior a nightmare about the totem, told him it was evil – so her plan was doomed to fail. Nanquato's people then staked his body to the ground and built a cairn around it so that evil spirits could not animate his body. The Dreamqueen watched in dismay as her plans of escape were buried, and Nightmare gloated that she would remain trapped in this realm for much, much longer.

As the years passed, the Dreamqueen's hatred grew with every passing moment. She took her frustrations out by using her powers to alter the landscape around her. Her moods would switch from violent outbursts to brooding introspection. She would sometimes create victims for her savage amusement but the thrill was not there. She had tasted the fears of real people and nothing could compare to that. Sometimes Nightmare would visit her, and she would hurl volcanic bursts at him – but Nightmare would just laugh at her.

Then, one day, her servants found a strange creature wandering the wilds of her realm – a creature that the Dreamqueen had not made – a truly independent living thing. Rather than torture the goblin-like creature, the Dreamqueen resisted her savage impulses and studied the strange, gray-skinned being for hours on end, with the aim of learning how it came to her world. When a portal opened and the strange creature was replaced by a mutant girl, the Dreamqueen's patience was rewarded. [Alpha Flight (1st series) #67]

To the Dreamqueen's intrigue, another young woman, Purple Girl of Beta Flight, was brought to her realm by the mysterious child who would trade places with the gray-skinned creature. The Dreamqueen learned from the mutant girl, whose name was Laura Dean, that she called this realm Liveworld and had called Earth Deadworld. Strangely, the gray-skinned creature was Laura Dean's twin sister, and she first arrived on Liveworld when they were still in utero. When their parents had learned that one of their twins was a mutant and tried to destroy her in the womb, Laura's mutant power to open portals worked in the womb and she had escaped. Her portal powers continued to work as they grew older, with Laura essentially living on Liveworld until danger would strike, then Goblyn would instinctively replace her, sending Laura to Deadworld.

When danger loomed for Laura and Purple Girl, they vanished, and Gobyln returned to the Dreamqueen's realm. The Dreamqueen found Goblyn, and treated the strange creature like a pet. The Dreamqueen showed affection towards Goblyn, presumably only in the hope that Goblyn would take her to Earth one day – so that she could conquer it. When Alpha Flight were traveling through space on a bizarre series of adventures, danger struck and Laura Dean vanished, replaced by Goblyn. However, when the danger passed, Alpha Flight were puzzled as to why Goblyn remained with them and Laura was nowhere to be seen. They were unaware that the Dreamqueen was keeping a close watch on Laura, determined that no one would leave Liveworld again unless she could as well. [Alpha Flight (1st series) #56-57]

The Dreamqueen located Laura Dean and demanded that, after having let her and Goblyn share

her hospitality on Liveworld, they must take her back to Earth with them. Laura tried to explain that only Goblyn could control when they switched places, so the Dreamqueen began to torture her.

This caused Goblyn, who was still traveling through space with Alpha Flight, to feel her sister's pain. However, she was unable to take Laura's place on Liveworld, so her teammate the Purple 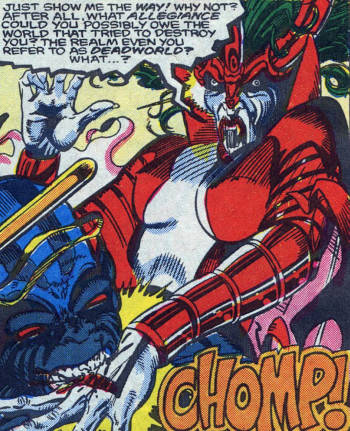 Girl performed a mindmerge, which somehow enabled Alpha Flight to warp through space and time, after which they crash landed on Liveworld. As she tortured the young mutant Laura Dean, the Dreamqueen revealed that she willed her realm into a refuge for the sisters purely for the purpose of following them back to Earth one day. When the Dreamqueen was told that Goblyn wouldn’t ever lead her out of this realm, she plunged Laura Dean into a nightmare, where her mutant-hating parents punished her. This further torture enabled Goblyn to find her sister, which surprised the Dreamqueen that both sisters could co-exist in the same realm. Realizing that other beings she hadn't created were in her realm, the Dreamqueen concluded that there must be other ways to bridge the dimensions. However, when Goblyn refused to serve her, the Dreamqueen set an army of her creations, called Dream Demons, after Alpha Flight. [Alpha Flight (1st series) #58]