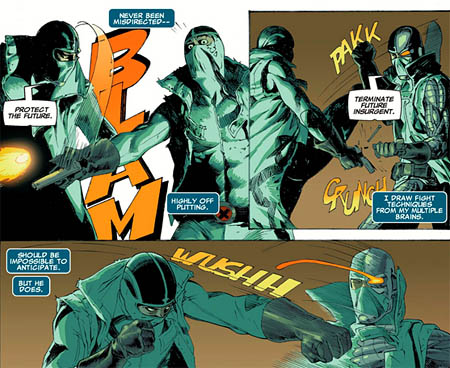 In the future of Weapon Infinity, Fantomex's gamble with Evan both won and lost. He succeeded in raising a more benevolent version of En Sabah Nur inside the World. The slow-time laboratory had other secrets, however, and the man known as Father appropriated Deathlok technology from inside the World to his own ends. The public turned against superhumans in part due to the actions of X-Force, as Archangel's assassination of a journalist to hide X-Force's existence came to light. Father's Weapon Infinity program took captured superhumans and reprogrammed them as loyal cyborgs, hunting down and capturing more of their number. Fantomex and X-Force were among those taken and assimilated. Although Fantomex was lost, his version of En Sabah Nur emerged from the World as the primary opposition to Weapon Infinity. Deathlok versions of X-Force and other heroes were sent back in time to kill the Apocalypse clone in the World before he emerged. In doing so, however, they paradoxically alerted X-Force to Father's existence early, and it was Father who was killed before his time. Fantomex and many of the other cyborgs were killed, then wiped from existence after Father was stopped. 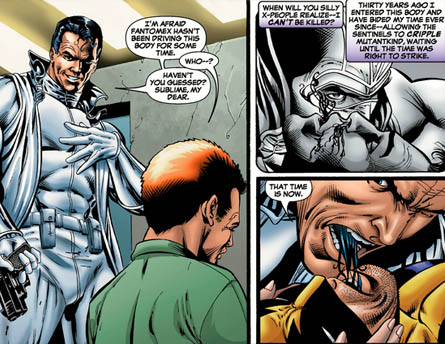 Spinning out of his first encounter with Wolverine and Agent Zero, Weapon X: Days of Future Now told a different story following that tale. EVA was sabotaged with a viral program by Weapon Plus and turned against Fantomex. She destroyed herself rather than fulfill the directives to kill Fantomex. He sought revenge on John Sublime, only to see the man apparently killed multiple times and rise again. The last time, the secret of Sublime's survival was revealed as the viral entity that was Sublime's real consciousness infected Fantomex. For the next thirty years, Sublime posed as Fantomex, lying low as the Weapon X Program and the rise of the Sentinels decimated the mutant population. When Wolverine and the last remaining mutants made their final play, Fantomex was there. Logan intended to use Rachel Summers to send his mind back in time and prevent the events of this timeline from happening. "Fantomex" intervened, however, vomiting the viral Sublime into Wolverine's body in the future, which somehow caused Sublime to manifest in the past as well. What ultimately happened to Fantomex and that future timeline remains uncertain. 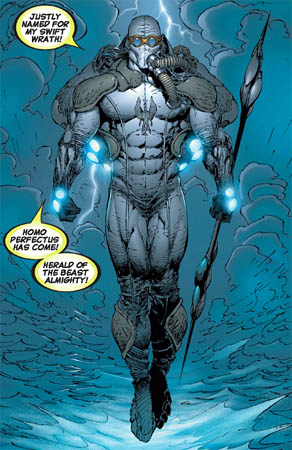 In Here Comes Tomorrow, an event happened which severed the connection between EVA and Fantomex. EVA evolved into techno-morphable bipedal mechanoid, operating independently as a member of the X-Men over 150 years in the future. Fantomex went down a darker path, becoming the servant of the Beast Sublime known as Apollyon the Destroyer. Apollyon was driven mad by his sense of incompleteness, desperately serving the Beast in exchange for promises that Sublime would make him perfect and whole again.