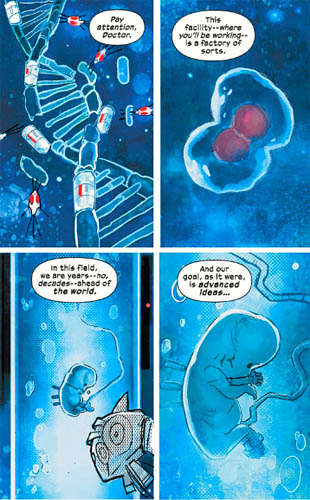 In order to produce the ultimate super-soldier, the Weapon Plus Program moved into stranger and more exotic technologies as new iterations began. They invented The World, a massive fish tank laboratory with dilated time, allowing them to accelerate the progression of their experiments relative to the real world. John Sublime, head of Weapon Plus, focused the program on anti-mutant directives, hoping to create a new breed of Sentinels by combining mutant genes with nano-technology. Weapons XII through XV were developed in parallel programs to become a team of Super-Sentinels, propaganda weapons intended to charm the human public as stalwart super-heroes while simultaneously eradicating mutantkind.

It was in these circumstances that Charlie Cluster-7 was born, or rather, made. Like many in these later generations, he was constructed within the World itself as a bio-weapon from birth, instead of being culled from volunteers or test subjects like Weapon X. He was designed with a unique cognitive structure, possessing three independent but overlapping brains capable of parallel processing. Each brain had a different personality (helping him with critical thinking and perspective), but still worked towards united goals. Charlie also had a quasi-independent fourth consciousness called EVA, a maintenance program of sorts which helped regulate the competing input from his three brains. EVA also inhabited his flying saucer, a physical extension of his nervous system that could operate remotely as a separate vehicle entity, or shrink and be stored inside his body. As Weapon XIII, he was sculpted and bio-programmed into a public identity as the hero Fantomex, a debonair and charismatic thief among the Super-Sentinels. [New X-Men (1st series) #145]

Like all of the weapons, Fantomex was taught that mutants were a threat to him and to all that he loved. But as his psychological profile was engineered to be untrustworthy and untrusting, Charlie Cluster-7 was also far smarter than his creators gave him credit for.  He was pre-programmed with a strong likelihood for betraying his creators and rejecting their design for him. And, inevitably, he did. Fantomex's moral development was also aided by Mother, one of the three scientists in charge of this program. She secretly nurtured him to know the difference between right and wrong, contrary to the nano-Sentinel programming he received from Father. When James Braddock, Sr., codename Brother, hid the Orb of Necromancy away in his home dimension of Otherworld, Father sent Weapon III to retrieve it. Mother in turn sent Fantomex to stop him, and Weapon III was left to the Otherworld authorities. Weapon III, a man named Pizer, possessed sentient skin as his mutation, and Otherworld ordered him skinned alive as punishment for his transgressions. Fantomex snuck back into Otherworld later and stole Pizer's living plastic skin, forging it into living bullets that never missed their mark. [Uncanny X-Force (1st series) #22] 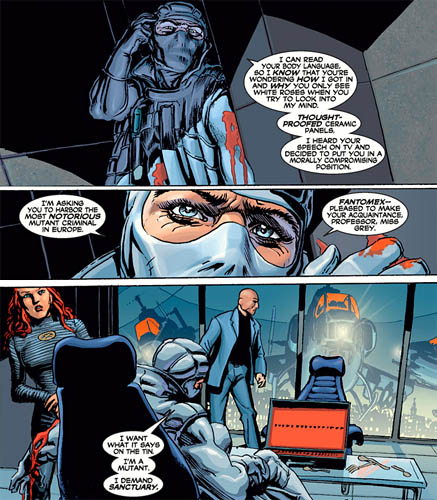 The exact circumstances of Fantomex's escape from Weapon Plus and the World are obscured by his own lies and misdirection. Fantomex first presented himself to the X-Men as a French mutant and international thief on the run from the authorities. He claimed sanctuary in the X-Corporation offices of Paris, France with Professor Xavier and Jean Grey. Fantomex revealed he had stolen data from the Weapon Plus Program regarding their efforts to eliminate "the mutant menace." Furthermore, a transportation accident in the Channel Tunnel being responded to by X-Corporation Paris was a trap. Zona Cluster-6, alias Weapon XII, had been deliberately released from the transport to lure the X-Men into an indefensible position for a weapons test. 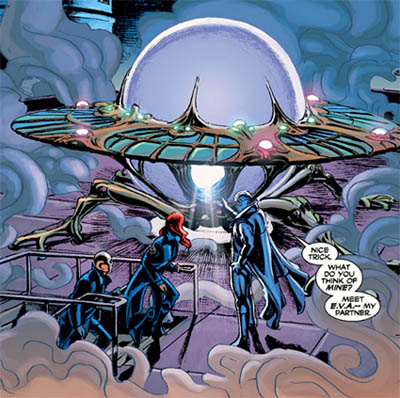 Fantomex played the role of an amoral and self-serving thief, willing to sell the data from Weapon Plus to Xavier for a tidy fee. He even brought Xavier and Grey to his hidden chalet, an ostentatious post-modern hideout in the side of a mountain where his blind mother lived her days ignorant to his thieving, believing they were still living in their tiny cottage from Marseilles. Fantomex kept Xavier and Grey's questions at bay with misdirection and his mask's thought-shielded ceramic plating. Eventually conceding that Weapon XII was a threat regardless of whether he was paid or not, Fantomex agreed to ferry the X-Men via EVA to the Chunnel to rescue their X-Corporation comrades. 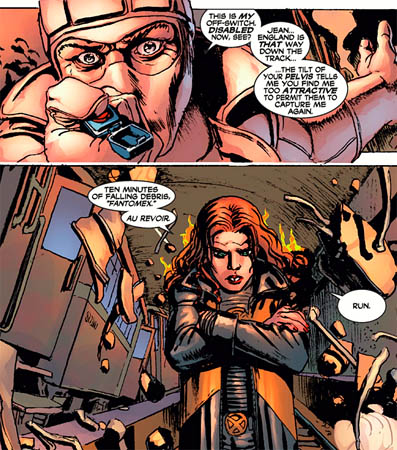 During the fighting that followed, however, his mask slipped and Jean Grey got a glimpse of the truth. A second containment pod was found on the transport labeled Weapon XIII. Jean reasoned that Fantomex was Weapon XIII, and had escaped from the transport himself. Fantomex confirmed her suspicions when he found and disabled an explosive "off-switch" in the pod, removing Weapon Plus's ability to find or shut him down remotely. He revealed that the internationally wanted super-thief Fantomex hadn't existed before he started talking about it, and everything after that had apparently been misdirection to acquire the X-Men's help in getting back on the transport to disable the switch. There was no data disc on Weapon Plus -- the information was all stored in his head. Despite his deceptions, Jean Grey allowed Fantomex to make his escape since he used Weapon XII's off-switch to end the threat. [New X-Men (1st series) #128-130] 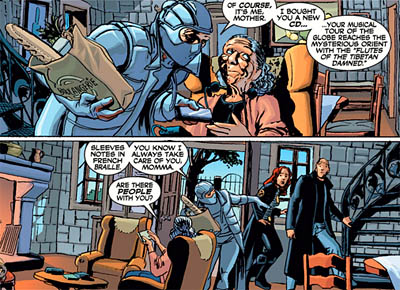 The truth revealed by the end of Fantomex's escape from the Chunnel is still suspect, however. When Jean Grey questioned Fantomex about his mother they met, he suggested the woman was an illusion and only part of the misdirection. In fact, Mother was a real woman (as far as we know), one of the founders of the UK branch of the Weapon Plus Program and the World with Father and Brother (James Braddock, Sr). She and Fantomex's mountain chalet would appear again, just as they were seen here. So, if Fantomex only escaped Weapon Plus in the Chunnel for the first time, it's difficult to place when he actually rescued Mother from them as well. [New X-Men (1st series) #129, Uncanny X-Force (1st series) #5]

Fantomex continued to pursue his own objectives in opposition to the Weapon Plus Program. He approached Wolverine in the Middle East, taunting Weapon X with the name "James," leaving tantalizing hints that he knew about Logan's long-forgotten past. [New X-Men (1st series) #133] In time, he convinced Wolverine to join him in an attack on the World itself. In exchange for his help bringing down Weapon Plus, Fantomex would help Wolverine gain access to the lost files of Weapon X, complete with records of his own history. Wanting back up for the mission, Wolverine recruited Cyclops to join the super-soldiers in their assault on Weapon Plus. [New X-Men (1st series) #142] 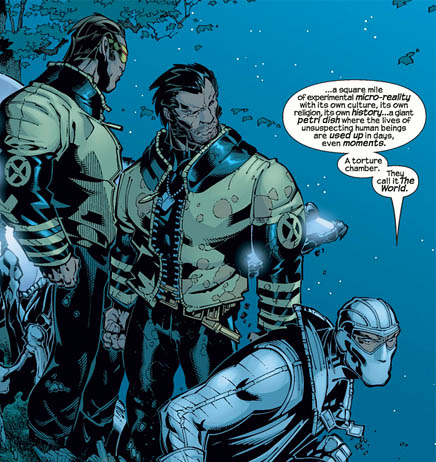 In England, the three mutants discovered A.I.M. had already breached the World, looking to steal back the time dilation technology being used by Weapon Plus. The chaos erupting from all this released Weapon XV, the latest super-soldier known as Ultimaton. Violent but confused about his purpose, Weapon XV escaped the World and pursued a signal into space. Fantomex and the X-Men followed him, locating the Weapon Plus Program satellite intended to be used as the Super-Sentinels' super-team headquarters. Fantomex fulfilled his part of the bargain and gave Wolverine access to the Weapon Plus Files while he and Cyclops dealt with resistance on the satellite. John Sublime, director of Weapon Plus, remotely activated the defense systems and disabled EVA, crippling Fantomex and forcing him to default onto his backup nervous system. Fantomex and Cyclops barely escaped the destruction of the satellite in a spare starship, as Wolverine stayed behind to detonate their explosive charges. [New X-Men (1st series) #143-146] 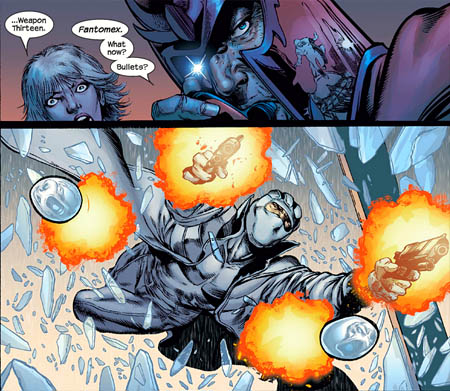 Cyclops and Wolverine had been scattered as part of a slow-burning plan by Magneto to infiltrate and destroy the X-Men from within. Revealing himself as the new Xavier Institute teacher Xorn, Magneto launched a terrorist attack on New York. Fantomex and EVA eventually recovered, joining Cyclops in rallying some of the Xavier students as a street team to oppose Magneto's Brotherhood. They infiltrated Xorn-Magneto's skyscraper base and rescued Professor Xavier. Although the final battle led to the deaths of both Jean Grey and Magneto, New York was liberated and the inevitable war between humans and mutants was pushed back to another day. [New X-Men (1st series) #149-150] 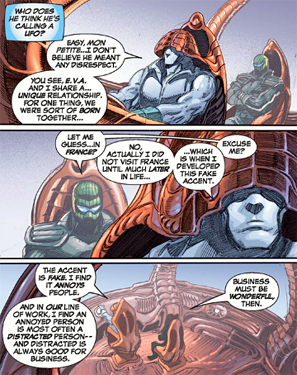 When John Sublime was reported dead, Fantomex took it upon himself to check. He unearthed Sublime's grave and uncovered an empty coffin except for a single word, "Roanoke." His search for Sublime brought him into contact with Wolverine and Agent Zero, late of the most recent Weapon X Program. The unlikely trio encountered Sublime at the site of a devastated city known as Roanoke, wiped out by the program. It turned out Weapon X and Weapon Plus had gone to war with one another, prompting both programs to go underground for a time. Sublime tried to have them killed, and escaped without providing any real closure to the three men. [Weapon X (2nd series) #23-25]

[Note: Sublime claimed one of the trio was a sleeper agent for Weapon X, and the story ended with the crash site of E.V.A. and Fantomex clawed to bits. The Weapon X series ended before resolving this plot, however, only addressing it in the possible future seen in Weapon X: Days of Future Now, where Agent Zero was indeed revealed to be under Mesmero's control. However, E.V.A.'s crash was never followed up on in the main universe.] 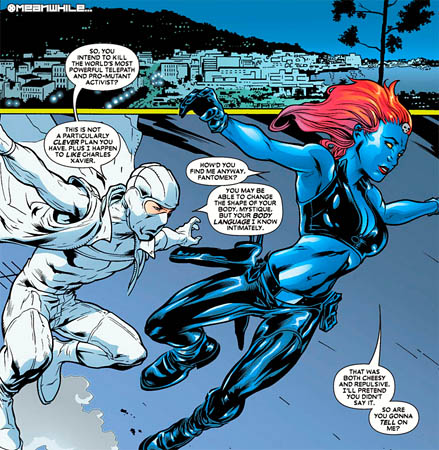 Fantomex next turned up in Monte Carlo, where he was contacted by Shortpack of Xavier's mutant underground. Shortpack was looking for help to track down and kill and old nemesis named Steinbeck, but Fantomex refused to help the morally upright Shortpack sink to becoming a pre-meditated killer. He said as much to Mystique and Forge when they came looking for Shortpack, but Mystique startled and bolted when she heard the name Steinbeck. Mystique and Fantomex had met before and she found him obnoxious for many reasons, including his ability to read body language, allowing him to see through her morphing talent. Fantomex followed her and learned Mystique was being pressed by Steinbeck to kill Xavier for his own reasons. Mystique stabbed and seemingly killed Fantomex to keep her secrets. [Mystique #20-21] In fact, Mystique was being watched by Steinbeck's agents at all times and needed to cover her tracks. She manipulated her vocal chords to warn Fantomex at a frequency only his super-soldier ears could hear, using him to warn Xavier ahead of her assassination attempt. [Mystique #24] 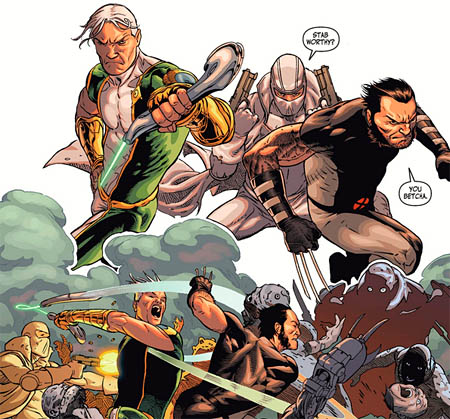 After a prolonged absence, Fantomex returned to the World when he learned Norman Osborn wanted to acquire its technology for H.A.M.M.E.R. Osborn's zombie-cyborg Deathloks ran afoul of the World's own protective measures, for the ever-evolving laboratory had grown its own living brain to govern its defense. The World released Weapon XVI, Allgod the Living Religion, a gas transmitting a viral thought pattern that bound others to a common cause. Fantomex found himself caught between the invaders and the defenders when Wolverine and Noh-Varr of the Kree arrived as well. Logan was enslaved by Allgod, but the Kree were militant atheists and Fantomex was nano-conditioned to prevent him from believing in anything greater than himself. They managed to gain control of the World and drive out Osborn's minions. Fantomex then used a shrink ray to reduce the World into the palm of his hand, keeping it safe for the future. [Dark Reign: The List -- Wolverine #1]