Guardian of the Universal Amalgamator

• Extra-dimensional psion possessing telepathy,
telekinesis, low-level empathy and matter-
warping abilities that enable her to alter
the size and shape of existing objects
or summon new objects into existence
from her mind

The entire origin of Gaia is still a mystery. Apparently, she is a mutant from an alternate reality, though she might also be a super-powered alien species, closely resembling humans. Whatever the case, her vast psi-powers including telekinesis, empathy and reality-shaping predestined her for the role of Guardian of the Universal Amalgamator. That device, located in a lonely citadel at the edge of reality and the end of time, could be used to merge all sentient consciousnesses of the omniverse into one single being. 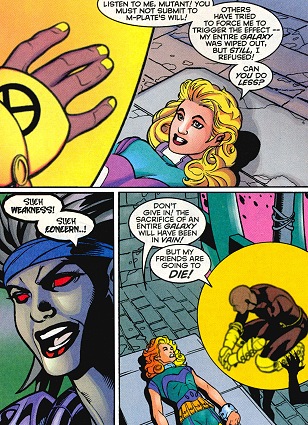 Being both the “key” that could set the device in motion as well as the guardian that was supposed to watch that it would never be used by people with malicious intent, Gaia was chained to an altar-like plinth inside the citadel for all eternity. Gaia served her duty for several thousands of years, not once granting the use of the Universal Amalgamator, not even when her entire galaxy was destroyed to force her into compliance. Well aware that Gaia could not be blackmailed into servitude, the villain M-Plate came up with a different plan. M-Plate kidnapped Generation X’s Synch, hoping that the young man could copy Gaia’s powers and activate the Universal Amalgamator in her stead.

Blackmailed with the well-being of his friends and family, Synch was about to give in, much to Gaia’s horror. Luckily, though, Synch’s teammates from Generation X had followed him across several alternate realities and opposed M-Plate’s forces. During the battle, the citadel and the Amalgamator inside were seemingly destroyed. At the last instant. Synch and Penance freed Gaia from her shackles, after which Gaia then pointed them to a portal to Earth and returned with them. [Generation X #37-39] As soon as she realized that she was now free and able to explore a life that had been denied her for several millennia, Gaia ran off, not even realizing that Synch was being attacked by a couple of mutant-haters in front of whom they had materialized. 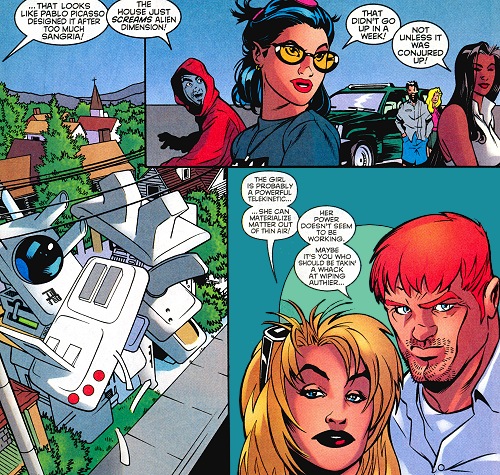 With her reality-altering powers, Gaia made life easy for herself. She gave herself a new pink hairdo and created a futuristic house out of thin air. A few weeks later, though, she crossed paths with Generation X again.

Like every other telepath on the planet, Gaia was affected by the Psi-War between Psylocke and the Shadow King and she temporarily lost her powers. The problem was that she was driving around in her fancy new car right when it happened and, as she lost control of it, she caused an accident. The students of the Massachusetts Academy happened to be in the area, and their friend, Chief Authier, decided to not press any charges and released Gaia into their care. [Generation X #42]

While waiting for her powers to return, Gaia was further getting to know the students of the Massachusetts Academy. She was well aware that Synch, with whom she had interacted before, 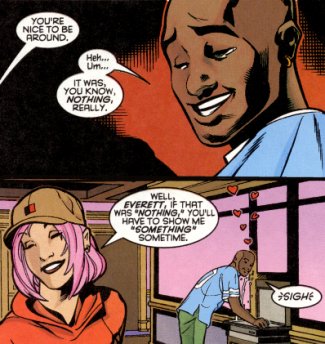 was harboring romantic feelings for her and, while she too liked him a lot, she didn’t seem interested in a serious relationship. Maybe the concept was just too alien to her, as, despite her age and long life-span, in many ways she was as naïve as a kid. She had barely interacted with other people and was still trying to find her place.

Not having any powers was also something she had to adjust to. Before, she could easily make her every wish come true. However, as Emma Frost pointed out, she had more or less wasted her abilities conjuring up some stylish clothes and expensive toys. Obviously, Gaia couldn’t deny there being some truth to Emma’s words, as once her abilities came back, she enrolled at the Academy on a probationary basis - at least as long as she could figure out where to go from there. [Generation X #44-47]

As it is the case with most other psi-talents, Gaia’s only limits when it comes to using her powers are her imagination, will-power and the ability to concentrate.  That she was lacking in all these 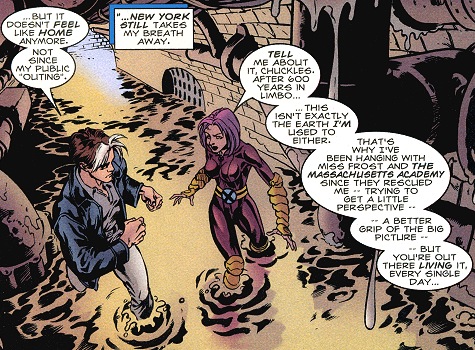 departments was made painfully clear when Generation X were targeted by the Dark Beast and his goons, Gene Nation. Though clearly outclassing them in terms of raw power, Gaia was easily defeated and left for dead by them, whereas her teammates were all taken to the Dark Beast’s labs for experiments. Gaia and Emma Frost then joined forces with the time-displaced X-Man, Nate Grey, who was hunting the Dark Beast for reasons his own. Along the search for her teammates, Gaia found a kindred spirit in Nate, as he too was an outsider on a world not his own and also wielded much more power than he could handle. [Generation X #50, X-Man #50]

The encounter with Nate Grey caused Gaia to realize that, were she to truly understand it, she needed to experience life on Earth first-hand rather than just read about it in a secluded private school. Her announcement to leave the Academy couldn’t have come at a worse time, though, as the school’s headmaster, Banshee, had been taken hostage and Generation X were in the middle of devising a plan to rescue him. Given the circumstances of Gaia’s departure, not all of her former teammates have the fondest memories of her. [Generation X #51]

It is unknown whether Gaia still resides on Earth and what she may have experienced during her travels. However, if she still is around, she probably retained her powers through M-Day, as no people originating from alternate realities seem to have been affected by the Scarlet Witch’s spell that caused 90-95% of Earth’s mutants to lose their abilities.