A man in his sixties or even older, the mysterious man known only as Gateway is a mutant of Aborigine descent, who also happens to be a shaman of his people. He is capable of opening passages in space by spinning his bullroarer, allowing for instant teleportation anywhere on the globe. Occasionally, his portals also transport a person through time or to an alternate reality Earth. Usually, upon activating a portal, Gateway sits in a lotus position in front of a bonfire that flares up as soon as a person steps through.

Gateway can access the Dreamtime, an altered state of consciousness that is based on the Aborigines’ ancestral past and the era of creation that existed before human beings and yet also extends into the present day. From time to time, Gateway uses the Dreamtime to interact with other people, as he rarely ever speaks. He spends much of his time in a meditative, trance-like state, processing all the information he perceives by being able to view other times, dimensions and physical planes. [Wolverine (2nd series) #52, Uncanny X-Men Annual #12, X-Treme X-Men (1st series) #4]

Just as it has yet to be determined which of Gateway’s abilities are mutant and which are mystical in nature, the circumstances under which he manifested them are unknown. At some point, the Reavers, a gang of criminal cyborgs, learned of Gateway and set up camp in an abandoned ghost town in the Australian Outback. By threatening to violate a place his tribe deemed sacred - which according to Gateway’s beliefs would have caused the spirits of his ancestors to wander the Dreamlands restlessly till the end of time – the cyborgs blackmailed the Aborigine into providing them with easy transport and an escape route for their hit-and-run operations. 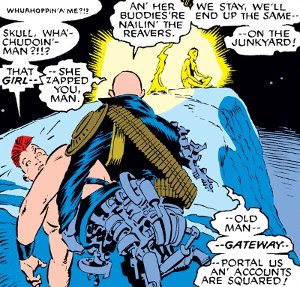 It is unknown for how long Gateway was forced to serve the Reavers, but eventually the X-Men learned of the cyborgs’ criminal exploits and tracked them down to their headquarters in the Outback. Launching a surprise-attack, the X-Men quickly got the upper hand, although three of the Reavers – Bonebreaker, Skullbuster and Pretty Boy, managed to avoid capture via one of Gateway’s portals. In exchange for teleporting them to safety, Skullbuster released the Aborigine from all his debts and vows to them. [Uncanny X-Men (1st series) #229]

Sitting atop a nearby hill, Gateway silently observed as the X-Men, who had faked their deaths and gone into hiding, turned the Reavers’ headquarters into their new base of operations. When they stumbled upon the Reavers’ amounted treasures and decided to return all of it to their rightful owners – with Longshot and Psylocke using their powers in tandem to “read” each item – Gateway realized the X-Men were good people and decided to aid them. With him teleporting the mutants all over the globe, they managed to return all the stolen goods within a single night. [Uncanny X-Men (1st series) #230] 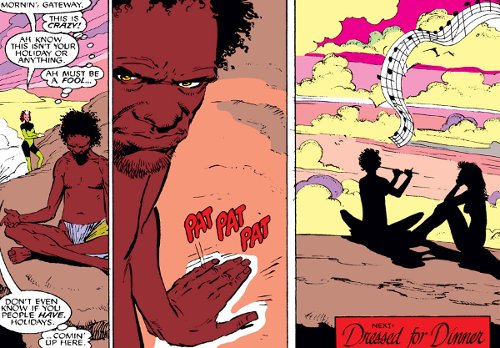 After that adventure, Gateway would regularly transport the X-Men individually or as a group wherever they needed to go, and he somehow also knew when they had finished their tasks and were ready to be teleported back into the Outback. Rogue especially took a liking to Gateway, bringing him home-made food and a flute that he would play for her. Before long, Gateway used the Dreamtime State to connect with his new friends. While in Dreamtime, Gateway observed the growing corruption of the X-Men’s ally, Madelyne Pryor, by Limbo demons, yet did neither intervene nor alert any of the X-Men to the growing danger in their backyard. [Uncanny X-Men (1st series) #232-234] 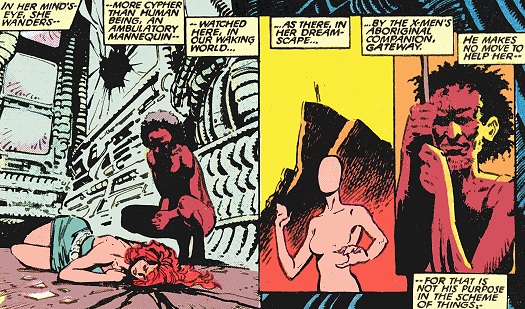 On another occasion, Gateway taught the naïve Longshot how to access Dreamtime and, in the altered state of perception, the amnesiac X-Man realized that he was incomplete as a person as long as he did not try to uncover his past. This led to Longshot quitting the team. [Marvel Comics Presents (1st series) #16, Uncanny X-Men (1st series) #248]

When Gateway teleported the female X-Men to the Hollywood Mall in Los Angeles, their unusual arrival was noticed by Jubilee, an orphaned teenage mallrat, who happened to be a mutant herself. Admiring the four beautiful ladies, Jubilee secretly followed them the entire day and was eventually rescued by them from a bunch of mutant hunters.

Shortly thereafter, the Reavers – now led by Donald Pierce – returned to reclaim their base. They made their move when the X-Men were away on a mission, but Gateway managed to contact Psylocke nonetheless. Through Dreamtime, Gateway sent the telepathic X-Man a precognitive vision, alerting her of the cruel fate the Reavers had in store for them. Psylocke took the warning seriously and, by the time Gateway teleported the X-Men back to Outback, she convinced the other X-Men to step through the Siege Perilous, a magical crystal portal that was to send them to a new life.

Though robbed of their revenge, the Reavers still captured the unsuspecting Wolverine when he returned from a short leave of absence a few days later. They tortured him for days, with Gateway unable to help him, as he was once again forced to obey the Reavers. However, Wolverine managed to escape with the help of Jubilee. [Uncanny X-Men (1st series) #250-252]

Given the near omniscient nature of Gateway, it is outright possible that he deliberately arranged for Jubilee to around for this very purpose. A couple of months later, Rogue emerged from the 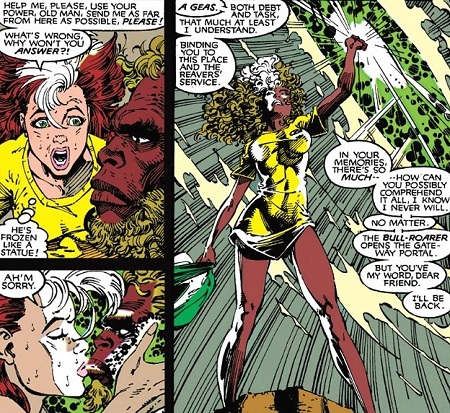 Siege Perilous, stripped of her powers of flight and invulnerability, rendering her defenseless against the Reavers. She knew she needed to escape as soon as possible and ran up to the rock outside the ghost town where Gateway sat, but the Aborigine didn’t spin his bullroarer for her. In fact, he didn’t even seem to notice her. Having no other option, Rogue kissed Gateway to absorb his powers and, while doing so, she also caught a glimpse of the sheer amount of knowledge he had stored in his head. Rogue also gained a basic idea of the “geas” that bound Gateway to the Reavers, some sort of spell or curse to ensure his servitude, and she promised Gateway that the X-Men would come back for him as she stepped through a warpgate she created for herself. [Uncanny X-Men (1st series) #269] Unfortunately, she couldn’t keep her promise as she ended up stranded in the Savage Land for several weeks.

Apparently, Gateway was only bound to answer Donald Pierce and, whenever one of the other Reavers needed Gateway’s services, they had to wait for Donald Pierce to order the Aborigine to do as told. However, Gateway only reluctantly served them and was always looking for ways to thwart the cyborgs’ plans. When he was asked to send Lady Deathstrike to the place Wolverine was looking at, he sent her into the past, as right in that instant the feral X-Man was admiring a photo taken in Spain in 1937. [Wolverine (2nd series) #35]