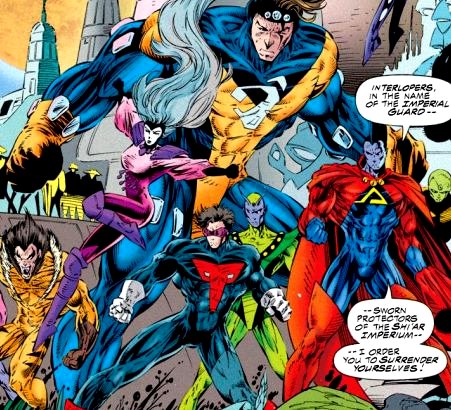 In the Age of Apocalypse, Gladiator was also Praetor of the Imperial Guard. As the X-Men never stopped D’Ken from tampering with the M’Kraan Crystal, it had grown unstable. When Gambit and the X-ternal’s came to the Shi’ar Galaxy seeking a piece of the crystal, they clashed with Gladiator and his Imperial Guard. Teaming up with Rictor, a servant of Apocalypse, the Imperial Guard battled the X-ternals again but were this time crystallized by the M’Kraan. Only Gladiator and Rictor managed to escape. Leading a contingent of soldiers against the X-ternals at the site of the M’Kraan Crystal, Gladiator came afoul of Sunspot, who was channeling the energies of the crystal. The mutant unleashed his power on Gladiator, completely crystallizing him.

In another alternate future, thunder god Thor was the absolute rule of the Earth in “The Reigning.” The Gladiator of that time formed an alliance with Zarrko the Tomorrow Man to end Thor’s rule by altering the past. After their first attempt, sending a killer robot back, failed, Gladiator himself travelled back in time to kill Thor in the 21st century. After a fierce battle, the time traveler was defeated by Thor with help from Thor-girl. Before he could reveal anything to Thor about his future, he was silenced by Odin, who sent him back to where he came from. 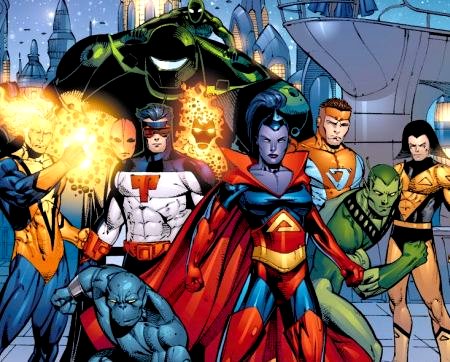 In the future depicting The End of the X-Men, Gladiator was a female. Unknown to Gladiator, her Majestrix Lilandra was under the influence of Cassandra Nova, who had launched deadly attacks against the X-Men. Gladiator led the Imperial Guard in the final climactic battle with the X-Men until Nova revealed herself. Seizing the power of the Phoenix, Nova decimated the forces around her and decapitated Gladiator.

In the reality of the Marvel Zombies, Gladiator was recruited into a group of superhuman zombies that consumed all life in the universe. When the troupe returned to Earth to use Reed Richard’s interdimesnional portal, they were surprised to discover a colony of surviving humans, led by Black Panther. When the zombies attacked the human colony Gladiator found himself locked inside a forcefield with the humans and his zombie allies Spider Man and Luke Cage. Feeling guilt for their years of horror, Spider Man and Cage turned on Kallark though, helping the humans to exterminate him. 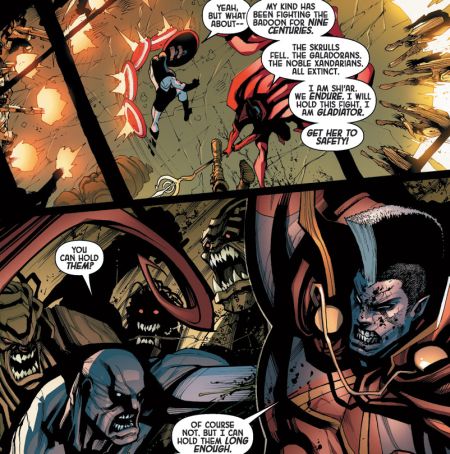 In the alternate future shown in Guardians 3000, Gladiator is still Majestor of the Shi’ar 1000 years in the future. When the Guardians of the Galaxy arranged a meeting of the surviving Galactic Council, the meet was attacked by the Baddoon, who were the dominant threat in the universe in that era. Grey haired but as powerful as ever, Gladiator stayed behind to fight off the Badoon and allow the other time to escape. 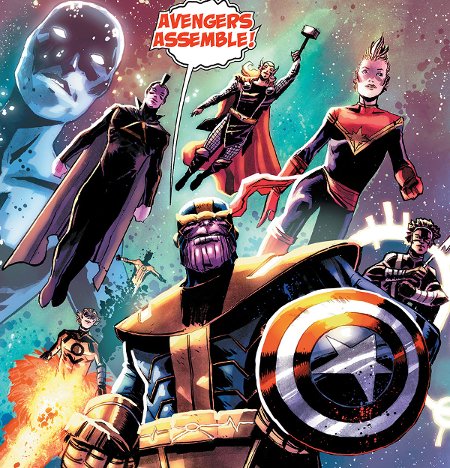 In the reality depicted in What If? Infinity – Thanos the war with the Builders didn’t go as well, forcing the Avengers and the Galactic Council to ally with Thanos and his Black Order. Gladiator joined the Avengers, along with another surprising recruit; Thanos. Kallark even took a blast meant for Captain America, and though injured he survived.  Unbeknownst to the Avengers though, Thanos had manipulated the group for his own purposes and murdered Captain America.  Gladiator continued to serve alongside the Avengers (and Thanos) after the Builder War was won. 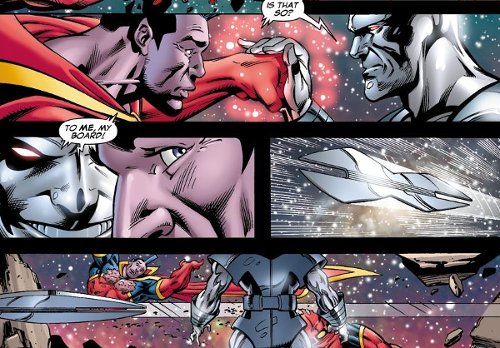 Exiles (1st series) #87 depicted a reality where Galactus was the restorer of worlds,and the Shi’ar were fighting to protect from an evil Silver Surfer.  This version of Gladiator was in love with Manta, and fought the Silver Surfer one on one to save Galactus.  In the end Kallark was no match for the Surfer, who bisected him with his board.