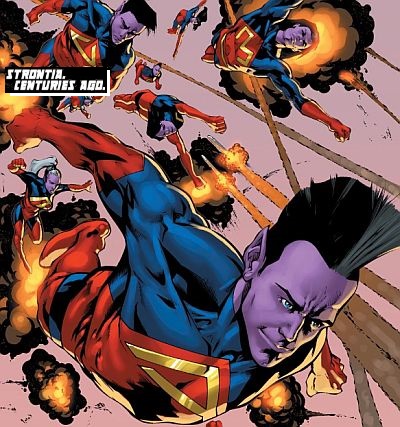 Hailing from the planet Strontia, Kallark started his life hundreds of years ago as a promising young cadet in the Strontian elite. When Shi’ar Majestor T’Korr decreed the formation of the Imperial Guard, partly to combat the threat of the Phoenix host Rook’shir, Kallark was chosen among a select few candidates to compete in a series of trials to represent the Strontian race in the guard.

Kallark and the other candidates each underwent the gladiator process, which greatly enhanced their already prodigious abilities. The final trial was selected by Majestor T’Korr himself, who decreed that the Strontian Council of Elders be slain. While most of the candidate complied with the order, the majority fell in battle due to their conflicted emotions. Kallark was the only one to remain steadfast in his dedication and completed the Majestor’s mission.

It was revealed that Kallark had been instructed by the Council themselves to complete T’Korr’s mission. If all the cadets had refused T’Korr’s order, he would have activated a starcracker next to Strontia’s sun, sending it nova and destroying their world. The Council of Elders had informed only Kallark, their most promising candidate, of this deal, ensuring their own deaths to save their people. Only after killing the Council did Kallark destroy the starcracker. Proving his loyalty, Kallark earned the title of Gladiator and was named as praetor (leader) of the newly formed Imperial Guard. [War of Kings: Warriors #1] 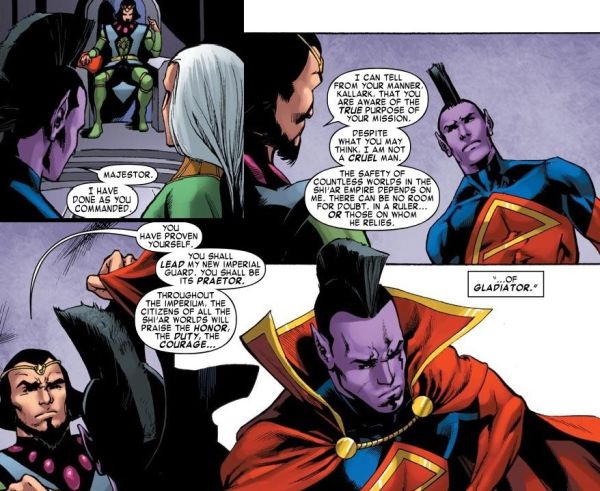 Soon after, Gladiator was thrown into his first test as leader of the Guard.  Emperor T'Korr assembled this new Imperial Guard with a specific objective in mind. 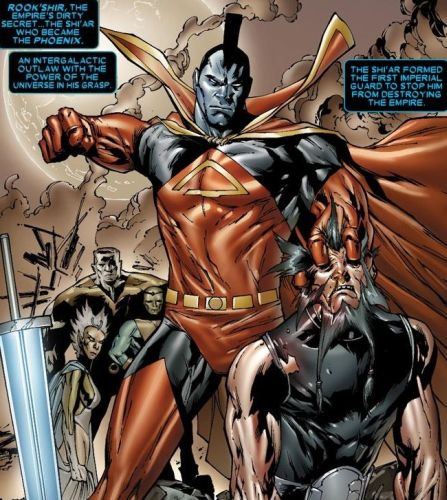 The team was sent to deal with the threat posed to the Imperium by the rogue Phoenix host, Rook’shir. The battle was intense but in the end Gladiator and his compatriots defeated Rook’shir, and Kallark decapitated him. [Uncanny X-Men (1st series) #479]

For the next five hundred years, Gladiator served each Shi’ar Majestor and Majestrix without question.  Somewhere during this time, the rest of his Strontian people, save Kallark and his cousin Xenith, were wiped out, along with their planet, though the exact details behind what happened to the Strontian’s race and planet is unknown. Also, during this time Gladiator fathered a son named Kubark. 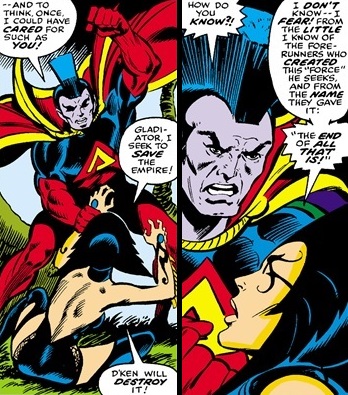 When the sister to Emperor D’ken, Lilandra Neramani, opposed his plans to use the M’Kraan Crystal to gain ultimate power, the empire erupted into civil war. Gladiator sided with his emperor, even when D’Ken captured his sister and planned to execute her before the crystal. Kallark was upset by Lilandra’s perceived betrayal, particularly because he cared deeply for the woman. When the X-Men came to rescue Lilandra, Gladiator led the Imperial Guard in battle against them. Despite the vast abilities of his team, they were all summarily defeated by the Earthlings and were thus unable to save their Emperor from being thrown into the M’Kraan Crystal and rendered catatonic. [X-Men (1st series) #107-108]

With D’Ken catatonic, Lilandra inherited the throne and Kallark served her as loyally as he did her brother. When Lilandra decreed that Jean Grey, the host of the Phoenix, must be executed for destroying the D’Bari system and to prevent future massacres, Gladiator led a contingent of Imperial Guardsmen against the X-Men in a Dual of Honor to decide her fate. 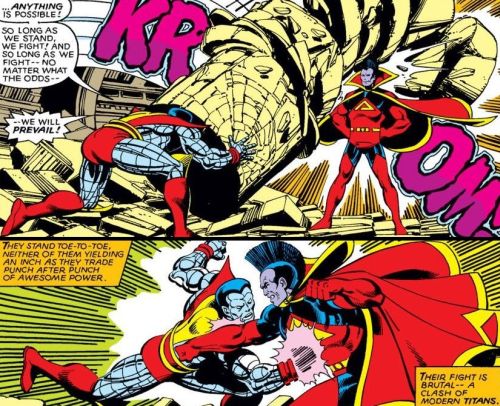 Perhaps because this time they knew what to expect from the Earthlings, Gladiator’s team defeated the X-Men. Ultimately, though, Jean Grey sacrificed herself, rather than become the Dark Phoenix once more [X-Men (1st series) #136-138]

When Lilandra was kidnapped by her sister Deathbird, Gladiator, the Imperial Guard and the Shi’ar fleet came to Earth and tasked the X-Men with finding her, keeping Nightcrawler and Kitty Pryde as hostages. When the captive X-Men helped reveal there was a traitor on the ship, Kallark was disappointed to find a contingent of traitorous Guardsmen loyal to Deathbird.  He battled the treacherous Guardsmen, alongside his loyal teammates and X-Men, and was winning the fight until falling victim to an explosive trap. After being defeated, Kallark experienced something rare for him; being shackled. The feeling didn’t last long, though, as he was soon freed by Lilandra, having been rescued by the remaining X-Men [Uncanny X-Men (1st series) #155-157]

Gladiator was tracking a group of Skrull criminals near Pluto when the desperate aliens created a small star in order to escape capture. The attack left Gladiator dazed and confused and, when he made his way to Earth, he initiated a fight with the Fantastic Four. After trashing several Manhattan streets and demonstrating the astounding feat of lifting the 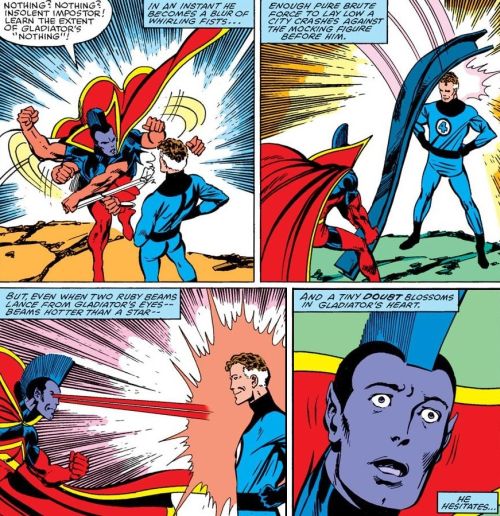 entire thirty-five story Baxter Building, Gladiator defeated the team, only then to be confronted by the X-Men.  The mutants were in fact the Skrulls Kallark had been chasing and roughed up the praetor, along with Spider-Man and Captain America. When the Fantastic Four recovered, Gladiator attacked Mister Fantastic, only to find every one of his attacks ineffectual. With his confidence weakened, the Invisible Woman struck, knocking him out cold. It turned out Mister Fantastic had deduced Gladiator’s weakness and placed a hologram of himself over Captain America, whose shield absorbed every blow. Upon awakening, Kallark regained his senses and took the Skrulls back to space to face justice. [Fantastic Four (1st series) #249-250]

Gladiator’s role as Praetor often had him at odds with other heroes. When a Shi’ar dreadnought was seemingly destroyed by a Spaceknight, Gladiator engaged Rom and his Spaceknights in combat. Sensing he could trust the man, Kallark freed Rom to battle a rogue Shi’ar in stolen spaceknight armor. Afterwards, he used a Shi’ar stargate to help the Spaceknights find their home planet. [Rom Annual #4]

When Deathbird seized control of the throne and sought the power of the mysterious Phalkon (actually the Phoenix Force), Gladiator battled both the Starjammers and Excalibur to capture Rachel Summers, but failed. [X-Men: Spotlight On... Starjammers #2]  Frustrated by having to serve Deathbird, who he knew held the throne through might rather than right, the Praetor flew to a distant galaxy to vent his rage. Diving into a red star, then destroying a lifeless planet, the Strontian’s rage lured an alien creature that fed off his anger. Powerless against the beast, which countered his every action, Kallark had an epiphany, realising there was victory in surrender. By not resisting, the beast dissipated. [Marvel Comics Presents (1st series) #49] 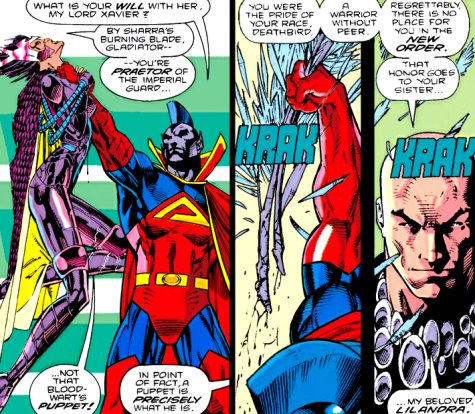 When a Warkskrull posing as Charles Xavier controlled Lilandra into reclaiming her throne from her sister, Gladiator found himself unable to protect Deathbird.  Kallark was himself mentally dominated by the psionically empowered Warskrull and  forced to beat and torture his former empress.  This included ripping off Deathbird's wings at "Xavier's" command. Fortunately, the X-Men intervened and after a brief battle with the mutants, the Warskrulls were vanquished and Gladiator was freed from the Warskrull’s mental control.  [Uncanny X-Men (1st series) 275-276]

As the Shi’ar went to war with the Kree, Gladiator found himself on the front lines of conflict when he heard a distress signal from a Shi’ar 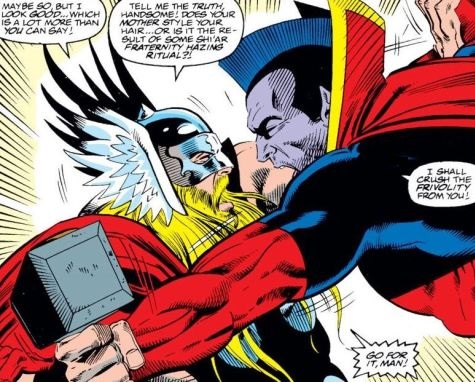 world under attack and rushed to their aid. Coming across the Avengers, who had come to negotiate a peace treaty, Kallark mistook the team for Kree agents and hastily attacked. He first battled then defeated Wonder Man, before engaging Thor in an intense fight. Thor fared well, but was struggling against the alien, until he stunned him with a massive lightning blast, followed by a swift beating. Defeated and unconscious, the Avengers hurled Gladiator through a stargate and destroyed it behind them so he could not pursue. [Thor (1st series) #445]

While investigating anomalous power readings in space, Gladiator was attacked by servants of Tyrant and was captured alongside Beta Ray Bill, Silver Surfer, Terrax, Morg and Ganymede. The villain intended to steal the group’s power to fuel his army but, thanks to the quick action of Jack of Hearts, who had just been captured, the group managed to escape and battled Tyrant himself. Unfortunately, the villain proved too powerful even for their combined power. It was only thanks to the intervention of Galactus that they managed to escape. The event served to solidify Kallark's respect for both Beta Ray Bill and Silver Surfer that would continue well into the future. [Silver Surfer (3rd series) #79-82]

As Lilandra requested a test of all Nova Corpsmen to determine their worthiness to wield the Nova Force, Gladiator obliged by testing Earth’s Nova Richard Rider in physical combat. Rider proved a challenge but ultimately he could not defeat the Praetor. Upon passing the test, however, Nova landed a sucker punch on Gladiator before leaving. [Nova (2nd series) #1]

Remaining in orbit above Earth after testing Nova, Kallark discovered that the Watcher had been abducted. A number of Earth heroes also discovered the abduction and were investigating, resulting in an encounter between Gladiator and Hyperion. The pair fought intensely, evenly matched in strength. However, Kallark proved more skilled in combat and captured his foe, despite him skilfully using the Strontian’s own hair against him as a weapon.

However, the other human heroes seized control of Gladiator’s ship and the praetor agreed to work with them to capture the criminals that kidnapped the Watcher. They tracked the kidnappers to the Stranger’s world, but the Shi’ar were unable to act, due to a treaty with the cosmic being. Several Imperial Guardsmen dissented and resigned to aid the humans, but Gladiator, always faithful to his duty and the law, refused to act. [Quasar #54-55]

After Lilandra received news of many of Earth’s heroes believed dead in the aftermath of Onslaught, she dispatched a team of eight Guardsmen to protect the planet, including Gladiator. Whilst on Earth, the Imperial Guard encountered a group of militant pink Kree, posing as humans, who tried to recruit an army to gain revenge on both earth and Shi’ar for having killed the Supreme Intelligence during Operation: Galactic Storm. The Guard were unable to prevent the Kree from reviving the Supreme Intelligence, but they did save the planet from a nega-energy release. [Imperial Guard #1-3]