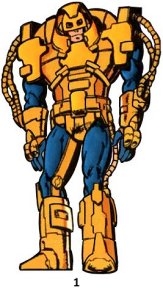 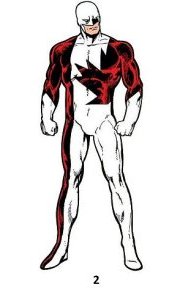 1) James Hudson’s original terra-forming exoskeleton was designed for function, not style. The basic blue/black body-suit was supported by layers of orange metal exo-structure, including massive boots and gloves connected to the main suit by hoses and bracers to help him move the heavy components. Hudson’s cybernetic helmet was a skullcap at the core of the headgear, surrounded by an elaborate collar presumably for neck support or to protect his head from cave-ins while tunneling. [Alpha Flight (1st series) #2-3]

2) Once he streamlined his exo-suit into a skin-tight design, Hudson added a costume over the micro-circuitry designed to resemble the Canadian flag. The suit was primarily red with a white stripe extending all the way down the center of his body, from the all white skullcap to the tips of his boots. On one side, a stylized red maple leaf indented into the white stripe, representing the central symbol on the Canadian flag. He also wore white gloves at the end of his red sleeves. [X-Men (1st series) #109]

3) After coming back from the dead, Hudson resumed the name Vindicator and reversed the color scheme on his costume, presumably to differentiate himself from Heather, now active as Guardian and wearing a costume identical to his original. [Alpha Flight (1st series) #90]

4) Mac returned from the dead again as Antiguard and wore a monochrome version of the Guardian suit. The original white remained, and the red was replaced with a gray-black color, giving him a spectral and unearthly appearance. [Alpha Flight (1st series) #129]

5) Back with Alpha Flight, Guardian wore a slightly-stylized version of his classic costume, resembling the suit worn by his synthoid double. Instead of an all white cowl, his headgear now had a red crest extending from the bridge of his nose up over the top of his scalp. [Wolverine (2nd series) #142]

-) With the latest resurrection of Alpha Flight, Mac has returned to wearing his first Guardian costume. [Chaos War: Alpha Flight #1]