James MacDonald Hudson was born in London, Ontario in the country of Canada. Mac was the youngest of three children fathered by Frederick MacDonald Hudson II, each with a different mother. Frederick died in a bar fight at age 30, and it’s unknown if Mac ever knew his real father. [Wolverine Origins #33] 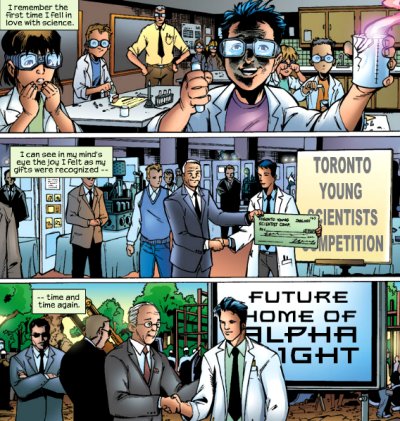 An extraordinarily bright child, Mac developed an interest in the sciences in grade school and won the Toronto Young Scientists Competition in his teens. [X-Men Unlimited (1st series) #45] He eventually went to college on a government student loan program. While studying for his doctorate in engineering, Hudson conceived of and built a prototype cybernetic helmet, a device which could read thought waves from a subject and convert them into electronic impulses. Hudson theorized that the helmet could be hooked into larger mechanical systems so that a user could operate them mentally and without any tactile user interface.

After graduating with his PhD, Hudson was hired by the American-Canadian Petrochemical Company and put to work in their research and development department in Edmonton, Alberta. His friend and supervisor Jerome Jaxon provided James with the funding and materials to create 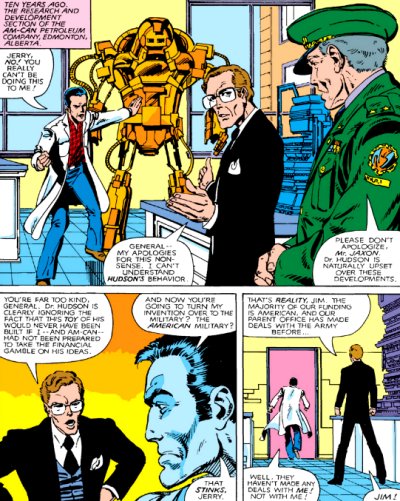 a “super-suit” to accompany his cybernetic helmet. Using an exoskeletal structure and applied electromagnetic principles, Mac hoped to create the ultimate exploratory tool, giving a man great strength, protection from injury, underground tunneling abilities, and even the power of flight. Working diligently for months to develop his prototype suit, Mac unknowingly became the object of affection for Jaxon’s teenaged executive secretary, Heather McNeil. Mac’s suit was eventually completed but Jaxon saw other uses for it beyond mere exploration and sold the design to the American military as a weapon. Hudson was furious at Jaxon’s betrayal, but was told there was nothing he could do since the suit was built on Am-Can’s time with their funding. That night, Mac chose to take matters into his own hands. Donning the exo-suit at Am-Can, he blasted his way into the company’s private vault and destroyed his original blueprints for the suit. Hudson then fled the premises and left the exo-suit on a nearby hillside but took the cybernetic helmet. James considered the helmet his intellectual property, since he designed it before going to work for Am-Can. Without the helmet, the exo-suit was little more than a thousand pound paperweight. [Alpha Flight (1st series) #2] 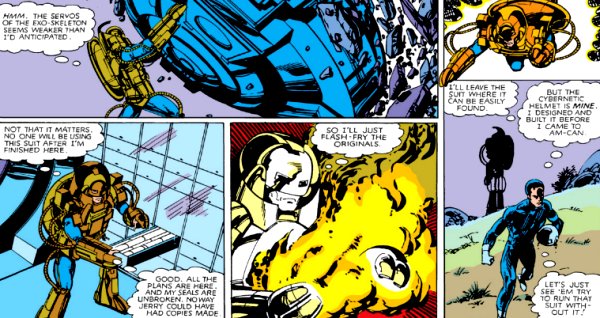 The next morning, Mac was brooding in his apartment and considering his options when Heather McNeil showed up at his doorstep. She had given notice to Jerry Jaxon out of respect for Hudson’s plight. With the cybernetic helmet sitting out on his coffee table, Mac had little choice but to unburden himself to Heather and was astonished when she declared her love for him. She even offered to marry him to avoid testifying against him in court. Although he gently rejected her advances, Mac was touched by her devotion and together they came up with a plan. Flying to Ottawa, they managed to arrange a meeting on Parliament Hill with a government official named Frank Hulme.  After hearing the details of Hudson’s situation, Hulme was able to use Hudson’s 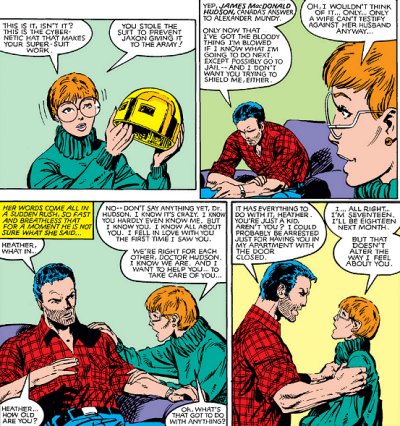 outstanding student loans to establish on paper that Hudson had retroactively been an employee of the government dating back to his time in college. With this legal fiction on the books, the Canadian government was more than happy to pay Am-Can for any property damage they may have suffered and to ensure that no criminal charges were leveled against Hudson. In exchange, Mac met with the Prime Minister and the Canadian Secret Services and agreed to help in the formation of a top secret R&D division of the Ministry of Defense, dubbed Department ‘H’, for Hudson. [Alpha Flight (1st series) #3]

Hudson spent the next year rebuilding his exo-suit completely from memory, using the materials provided for him by Department H. Along the way, he began a serious relationship with Heather McNeil despite being several years her senior. Though Mac was truly in love with Heather, he was a consummate lab-rat whose lack of social skills rivaled Reed Richards. After several months of not-so-gentle prodding, Mac finally popped the question to Heather and they were engaged to be married. Jimmy still had a lot to learn about romance, however, and told Heather that all he had time for was a quick appointment with the Justice of the Peace. Heather, who had grown up lost in a crowd of siblings, had always dreamed of a big ceremony on her special day and was nearly heartbroken by Mac’s arrangements. Her parents were even more incensed and refused to even stay for the exchange of vows before the Justice. Mac promised to give Heather and her family a big wedding in a proper Catholic church as soon as his duties at Department H allowed for it. [Alpha Flight: In The Beginning Minus #1] 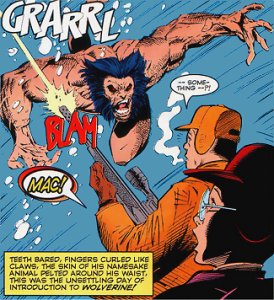 Mac was able to arrange a honeymoon for the couple - albeit a working honeymoon – as Department H wanted him to check out potential remote facility locations. The newlyweds went on a hunting trip in Wood Buffalo National Park. As they made camp at an isolated cabin, their trip was interrupted when a wild man leapt at them out of the snow. Both Mac and Heather shot the man before he eventually went down. Seeing how fast this wild man healed, Mac realized they had come across a potential superhuman for Department H’s meta programs. He convinced Heather to bring the wounded man back to their cabin. After tying him securely to the bed, Mac took off down the slopes to summon medical assistance and Department H. A blizzard rushed in that left Heather and the wild man isolated in the cabin for the entire night before Mac could return. Fortunately, Heather was able to reach the man underneath the beast and keep him calm until help arrived. [Alpha Flight (1st series) #33]

The addition of a genuine superhuman to Department H took up a great deal of Hudson’s time, much to Heather’s chagrin. On the day of their big official wedding at the Catholic church, Mac called in from the lab to say he couldn’t make it. The wild man, identified as “Logan” from his dog tags, needed considerable care and study, both to document his phenomenal healing powers and re-acclimate his near-feral, amnesiac mind to the modern world. Her patience and understanding was rapidly running low, but Heather agreed to postpone their wedding ceremony one more time. In the months that followed, Mac and Heather became best friends with Logan, forming a strong bond Department H’s first official super-agent, Weapon X or Wolverine. Mac also fully rebuilt his terra-forming exoskeleton to go with the cybernetic helmet and Department H dubbed it - Weapon Alpha. Despite the fancy name, Hudson had no intention of operating the suit himself. He only hoped to perfect the suit before handing it off to a suitable government operative for field work.

On the day of his wedding, Department H business presented Mac with yet another delay for the ceremony. Department H’s cosmic collector program in Orloo was running amok and Hudson and Logan were called in to deal with the potential meltdown of the device. The dangerously 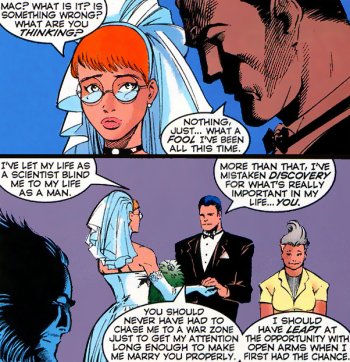 malfunctioning collector became even more of a threat after the local Canadian hero Chinook was mutated by its cosmic rays into a creature of considerable power and madness. Along with a construction worker named Judd, Mac and Logan stood up to the monstrosity as a miniature black hole began to form around the collector. They managed to knock Chinook into the spatial warp, but Mac was nearly drawn in after him. He was saved only by a human chain of his friends and allies, with Heather anchoring them at the far end. She had followed Mac into the heat of battle in order to make sure he made it to their wedding day. And so there, in a small chapel in Orloo, Mac and Heather finally had their full wedding ceremony before God and their families. [Alpha Flight: In The Beginning Minus #1]

As Department H grew, they found a new direction for their super-agent program after Heather alerted Mac to the debut of Reed Richards and his colorfully garbed team of adventurers known as the “Fantastic Four”, who had recently appeared on the world stage. Realizing that Canada needed not only super-agents but super-heroes, Mac went to work upgrading his exo-skeleton with revolutionary micro-circuitry advancements to make it a more impressive outfit for a super-hero to wear. [Alpha Flight (1st series) #3]

In the meantime, Hudson continued searching for other super-beings and special individuals to join Department H’s program. Some he came across by pure chance, such as when he and Heather visited her old neighbor, Dr. Michael Twoyoungmen at his wilderness retreat in Banff National Park. During their stay, Mac and Heather stumbled upon Michael’s secret: his young ward Narya was a shape-changing demi-goddess born of the Arctic Gods, and Twoyoungmen was a mystical medicine man who had served as her “midwife”. Hudson offered them both a place in Department H and used his government connections to create a legal background for Narya and teach her about the modern world. [Alpha Flight (1st series) #8] Mac also took note of a research proposal by Dr. Walter Langkowski of Vancouver, who had theorized a method of recreating the gamma exposure that created the Hulk under controlled circumstances. Hudson inducted Langkowski into Department H in exchange for funding his experiments. [Alpha Flight (1st series) #11] Twoyoungmen and Langkowski soon became Hudson’s closest advisors and friends.