As the super-hero program began to take shape, Hudson and Department H arranged for a training barracks to be set up at an isolated ranch near Thunder Bay. Logan, Narya, and several other new recruits were brought there for maneuvers as part of Canada’s first super-team, The Flight. Mac also found an operator he felt he could trust with his exo-skeleton: Detective Sean Benard, a good cop from Vancouver who was honest enough to cross the thin blue line and report his fellow officers to Internal Affairs for narcotics violations. Swept out of that situation by Logan and the Prime Minister himself, Benard was brought to Thunder Bay where Hudson introduced him to the exo-skeleton and gave him the codename, “Groundhog”. The Flight was still a fledgling operation and their training so far was mostly trial-by-error. The members of the team were not familiar with working with together and had little to no experience in the field. A situation with Egghead’s Emissaries of Evil forced Hudson to send the Flight into action before they were ready and the results were disastrous. Several members froze or broke down in the heat of combat, and the team’s godly new recruit Saint Elmo died before the situation was resolved. Benard was furious with Hudson for sending unstable and untrained “heroes” into action when they weren’t ready and abandoned Department H on the spot. [Alpha Flight Special (2nd series) #1]

Benard’s last words to Hudson weighed heavily on his conscience: a condemnation that if he wanted someone to wear the exo-suit, he should do it himself. Mac instituted a number of changes in the Flight program after the Egghead affair. He adopted a multi-tiered training scenario, with raw recruits undergoing basic training in Gamma Flight, a reserve group undergoing more advanced training in Beta Flight, before graduating to the active team of heroes that would be known as Alpha Flight. Hudson also resigned himself to the responsibility of wearing the exo-suit himself, and serving as leader of this new Alpha Flight. Mac had always intended Logan to be team leader, but the ferocity he demonstrated during the Egghead affair put too many doubts in Mac’s mind as well as with Department H’s backers. As the work to miniaturize and improve his exo-suit neared completion, Mac prepared to act as “Weapon Alpha”, leader of Alpha Flight.

Just after finalizing the designs for his Weapon Alpha costume, Hudson heard from Gary Cody that Weapon X had jumped ship. After meeting with an American visitor, Professor Charles Xavier, Logan resigned his commission on the spot and assaulted a Canadian general on his way out. The top brass were furious that Weapon X “defected” after several millions of dollars and nearly a decade of Canadian effort was put into him. They ordered Hudson to covertly extract Wolverine from the United States by any means necessary.  Mac had objections, but he also felt betrayed by his friend taking off so suddenly without so much as a goodbye and readied a field team from Department H for the mission.

The invasion was Mac’s first real field test of his gear as Weapon Alpha. After entering New York airspace, Hudson used his electromagnetic blasters to tunnel under Wolverine’s position in a forest upstate, coming out right on top of him. [Alpha Flight (1st series) #17] When Logan 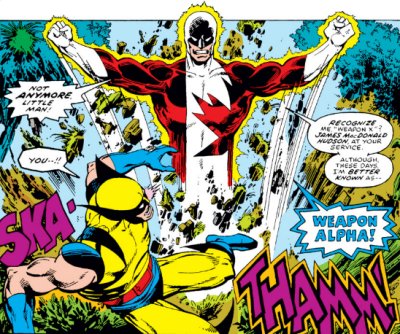 refused to come back willingly, a fight ensued and Mac’s suit proved to be an effective counter for Wolverine’s claws and savagery. Unfortunately for Weapon Alpha, their battle led them to a nearby clearing where Wolverine’s teammates in the X-Men were picnicking. Caught off-guard by an unfamiliar troupe of super-beings, Weapon Alpha fought back as best he could. During the melee, one of his force bolts ricocheted off of Colossus and creased the skull of the X-Men's houseguest, Moira MacTaggert. Mac was horribly shaken by the sight of an innocent bystander cut down by his actions. Outnumbered and off-balance, Weapon Alpha chose to flee using his electromagnetic braking effect rather than push the engagement any further. [X-Men (1st series) #109]

Appalled by the consequences of his first mission, Weapon Alpha felt he had much to vindicate in the weeks to come. He took the codename Vindicator and made preparations to bring Alpha Flight up to full active status before making his next attempt at recovering Wolverine. Hudson discovered that Jeanne-Marie Beaubier, one of the last recruits Logan had “headhunted” for Department H, had a twin brother. Reasoning that Jean-Paul Beaubier would have abilities like his twin sister, Mac summoned him to Parliament Hill and introduced the siblings. His theory proved correct, and the Beaubiers began intensive training as Northstar and Aurora. [Alpha Flight (1st series) #10] Around this time, Walter Langkowski finally completed his preparations for the gamma bombardment process. This procedure transformed him into the orange-furred powerhouse known as Sasquatch. With Walt’s research project completed successfully, Vindicator assembled Sasquatch, Snowbird, Northstar, Aurora, and Michael Twoyoungmen as Shaman, to become the first official roster of Alpha Flight. [Alpha Flight (1st series) #11] 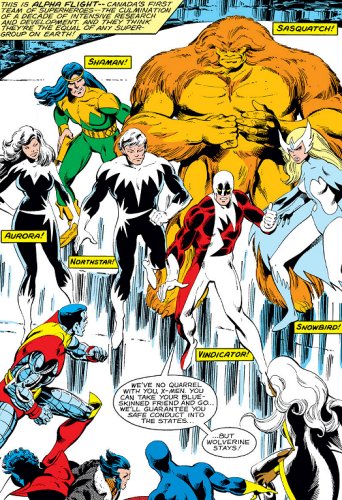 indicator saw his first opportunity to reclaim Weapon X when the Canadian government received word that the X-Men were flying across the Pacific Ocean on a return trip from Japan. Shaman used his potions to manipulate weather systems in the X-Men’s flight path, creating a freak blizzard that herded their jet into a landing on Canadian soil. The X-Men managed to escape from the airport before Alpha Flight could take them into custody. Vindicator dispatched his team to hunt them down in the city of Calgary. Mac encountered Banshee and Storm at the Dominion Mall, but fared no better against them than he had weeks earlier. He fled before a prolonged fight wrecked the entire establishment. [X-Men (1st series) #120] Nightcrawler and Wolverine were captured by other Alphans and Vindicator arranged for a showdown at the Calgary Stampede with the rest of the X-Men. The fracas that followed came to a sudden conclusion when Storm and Shaman put too much strain on the existing weather patterns, creating a storm that threatened the entire continent. After Ororo brought the storm to an end, Wolverine surrendered himself to Alpha Flight and the Canadian authorities to prevent further fighting. Of course, he escaped at the first opportunity and made his way back to the X-Men before their plane even took off. [X-Men (1st series) #121]

Vindicator was ready to lead yet another covert expedition into the U.S. for Weapon X but fortunately the Prime Minister called off the capture order. After attacking the X-Men, who had recently been publicly declared heroes by the government of Japan, and endangering half of North America with Shaman’s freak blizzard, the international political heat on Canada was too severe to risk any further attempts to recover Wolverine. The Prime Minister considered the entire affair a fiasco and told Vindicator he was now seriously questioning the Alpha Flight program in general. [Classic X-Men #27] 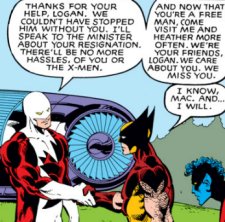 The Alpha Flight program limped along for a time, as the team performed various missions on behalf of the Canadian government. On an expedition to the Canadian wilderness to track the Wendigo, Vindicator and the team were joined by Wolverine and Nightcrawler of the X-Men, and Mac and Logan were finally able to put their differences to rest. Unfortunately, this happy reunion occurred just before the Prime Minister finally pulled the funding for Department H, leaving Alpha Flight without any backing. They retained some government contacts and their status as official RCMP deputies, but that was all. [X-Men (1st series) #140]

In the weeks that passed, Mac joined the ranks of the unemployed and he and Heather did their best to live off of her executive secretary paycheck. On the day that Department H finally closed down, Mac received a phone call from Gary Cody alerting him to a rampaging monster in the Northwest Territories. As Vindicator took to the skies again, Heather Hudson worried Mac wouldn’t be able to face the threat alone, and activated the signal implants in Alpha Flight from their home terminal, bringing the entire team to his aid. They successfully confronted and defeated Tundra, first of the Great Beasts who were Snowbird’s ancestral enemies. Flush with their victory, Alpha Flight decided to remain together as a team even without Department H’s backing and operate as independent super-heroes. [Alpha Flight (1st series) #1] As they began their training sessions alongside new members Marrina and Puck, Shaman suggested to Vindicator that he change his nom du guerre. He pointed out that, while Hudson might feel he had mistakes to vindicate, Canada did not. Mac agreed that as Canada’s unofficial “Captain America” he needed a stronger name, and chose to rechristen himself “Guardian.” [Alpha Flight (1st series) #2]

Despite their good intentions, Alpha Flight began to meet together less and less. Without Department H as a central location, the team was otherwise spread out across the entire country and only came together under the most dire circumstances. Canada was also not as prone to super-crimes or world-ending threats as the United States, so emergencies that needed the entire team’s attention were few and far between. Unemployed and only a part-time super-hero at best, Mac took serious interest in a job offer he received from the American corporation, RoXXon Oil. [Alpha Flight (1st series) #6] After discussing it with Heather, Mac decided to accept the 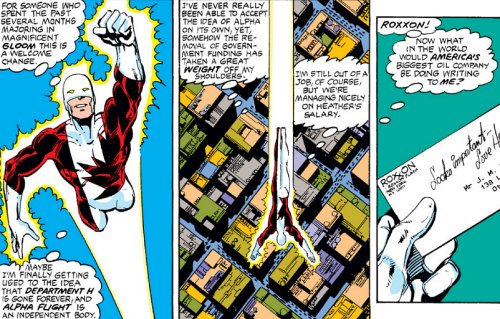 invitation and relocate to New York City so that he could pursue his original career as a petro-chemical engineer. Mac liked the idea of getting back to his roots as a scientist and acting as a super-hero in the capital of the world. [Alpha Flight (1st series) #10] 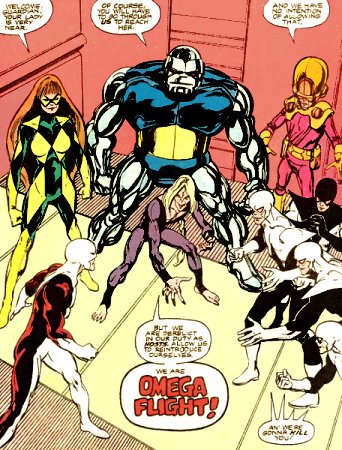 The job really was too good to be true. It was all a trap that had been arranged by Hudson’s old rival, Jerry Jaxon. Blamed by Am-Can for the loss of Hudson’s exo-suit ten years earlier, Jaxon had been fired and blacklisted by his company, abandoned by his family, and finally hit rock bottom when his attempt at suicide left him with brain damage and confined to a wheelchair. When he recognized Hudson’s work in the public displays of Guardian’s suit, Jaxon concocted a plan to steal the suit and exact his revenge on the Hudsons. Jaxon allied himself with RoXXon and gathered the disgruntled members of Department H’s training squads, some through guile and psychic manipulation. He united them as a criminal team he dubbed Omega Flight and set up a plot to destroy Guardian. Jaxon’s agent, Delphine Courtney intercepted Heather at the airport in New York by Jaxon’s agent and left behind clues implicating Jaxon and RoXXon that Mac would be sure to find. Guardian flew back to RoXXon at top speed, only to be confronted by Omega Flight when he arrived. [Alpha Flight (1st series) #11]

Guardian used his sub-dermal implant to summon the rest of Alpha Flight, and they engaged their opposite number in battle. Hudson was confronted by Jaxon, who had assumed control of Roger Bochs’s armored synthezoid to become the new Box and kill Hudson personally. Their struggle took them away from the rest of the fighting and using Box’s powerful form, Jaxon nearly beat 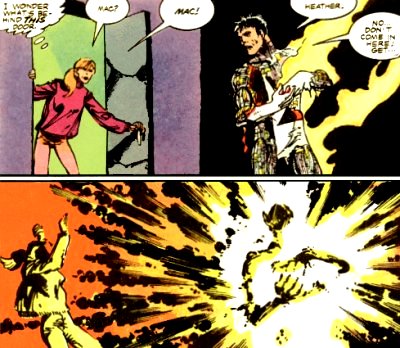 Guardian to death. In the end, Mac used his knowledge of Bochs’ work to short-circuit the robot, sending a lethal charge back through the control helmet and frying Jaxon’s brain, killing him. Hudson remained in danger, thanks to the energy in his power pack building to an explosive release. He had only seconds to disengage the power pack, and was distracted at the last moment when Heather burst into the room, having escaped from her captors. The pack exploded, apparently reducing Mac to cinders where he stood. [Alpha Flight (1st series) #12]