Mac remained with Alpha Flight as its leader, overseeing the original team while his synthoid double took the name Vindicator and served as the commander of a new Beta Flight team made up of Department H’s recent recruits. Heather remained a part of Mac’s life as the team’s government liaison for a time, but the two did not renew their marriage and she even briefly dated Puck. On a mission to locate the missing Weapon X subject known as Garrison Kane, Guardian and Vindicator were captured by MODOK and AIM. Alpha Flight joined forces with Wolverine and were able to locate Mac and his younger clone and free them. During the fight, Vindicator perished while turning some of AIM’s technology against them. [Wolverine (2nd series) #142-143]

In the months that followed, Mac and Heather eventually reconciled. They renewed their vows and began living as husband and wife again. Heather soon took a leave of absence from Alpha when 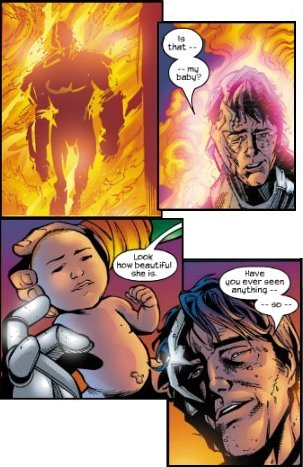 she became pregnant with their first child. [Wolverine (2nd series) #173] As Heather’s due date approached, a mentally-unbalanced scientist at Department H named Jiroult became obsessed with the Hudsons. He convinced himself that Heather was in love with him and attempted to kill James to get him out of the way. Hudson suffered catastrophic injuries in the blast from Jiroult’s “zero gun”, and only a desperate combination of Shaman’s magic and medicine kept him from the brink of death. Despite his injuries, James had Alpha Flight fit him into an exo-suit to go after Jiroult before he got to Heather. Guardian confronted Jiroult at their home, and the crazed scientist set his zero gun to overload, hoping to take Hudson out with him. Alpha Flight got Heather to safety, only for her to go into labor outside just as their house exploded. Mac emerged from the wreckage in time to witness the birth of his daughter, before finally succumbing to his fatal wounds. He would have died once again if Alpha Flight hadn’t summoned the X-Man Archangel, whose newly-discovered healing blood was enough to restore Hudson’s body to full health. [X-Men Unlimited (1st series) #45]

On a mission investigating the potential rise of the alien Plodex, Guardian and Alpha Flight were captured by the Plodex world-ship. While captive, their genetic material was harvested to imprint upon a new generation of Plodex soldiers. Sasquatch and a team of rookie Alphans managed to free their predecessors and stop the Plodex from being unleashed to conquer the Earth. Hudson and the others had been connected to the genetic memory of the world-ship while and learned that the Plodex homeworld had recovered from the holocausts visited upon its populace thousands of years earlier. Seeing a chance to provide the Plodex with a new start, Guardian and Alpha Flight decided to travel back to the revitalized Plodex world with the million unborn Plodex eggs in the world-ship to repopulate the planet and hopefully ensure that this new breed of Plodex would not become the harsh conquerors their ancestors were. Leaving the safety of Canada in the hands of Sasquatch’s new team, Mac and Heather left for the stars with their daughter and the rest of Alpha Flight’s old guard. [Alpha Flight (3rd series) #1-6]

In an undocumented series of events, Guardian and Alpha Flight concluded their mission in space and returned to Earth to defend Canada once more.  When an extra-terrestrial energy source 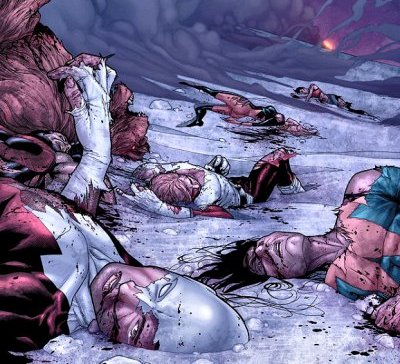 touched down in North Pole, Alaska, it created a super-being of unbelievable power. This being, later referred to as The Collective, began making his way at high speeds across Alaska and into Canada. SHIELD coordinated a response with the Canadian government, sending Guardian and Alpha Flight out to intercept the Collective. Their mission was a failure, as the Collective single-handedly dispatched the entire team, killing Mac, Heather and most of their friends and teammates before leaving them dead on the icy plains. [New Avengers (1st series) #16]

[Note: While Guardian and Alpha Flight were in space with the Plodex, a temporally displaced version of the team were snatched from the past, shortly before Mac’s first death against Omega Flight. For a time, it was unclear whether the Alphans killed fighting the Collective were the originals or these alternate-reality heroes. Chaos War: Alpha Flight #1 established that the Alphans killed by the Collective were the ones who came back from space. No resolution for the doppelgangers has yet been revealed.]

Although they physically died, Shaman was able to preserve the team’s spirits in the realm 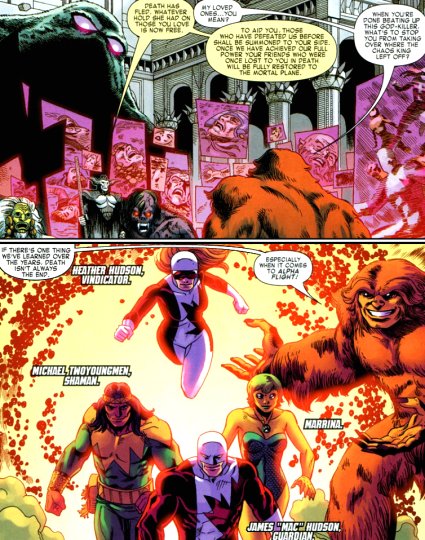 between realms so that they did not completely pass over into the afterlife. They remained there for many long months until Amatsu-Mikaboshi, the Chaos King, destroyed Death itself. In his mad war against all of existence, the Chaos King hunted and killed entire pantheons of gods and proved powerful enough to even threaten the Great Beasts. The Beasts sought out Sasquatch and requested his assistance in crossing over to the Earth dimension to confront Mikaboshi’s forces. In exchange, the elder Great Beast Somon, claimed responsibility for raising Guardian, Vindicator, Shaman and Marrina from the dead to assist Sasquatch. Unaware that Mikaboshi’s path of destruction was causing the dead to rise anyway, Sasquatch agreed on behalf of Alpha Flight to help the Great Beasts defeat the Chaos King and his armies.

James, Heather and the others returned to the land of the living and were reunited with their surviving teammates. The Great Beasts needed Alpha Flight to fight off the Chaos King’s armies long enough for them to reach their full power upon their return to Earth. Despite the fact that their very lives hung in the balance, Alpha Flight could not stomach the idea of fighting on behalf of the Great Beasts, feeling that to do so was merely trading one planetary threat for another. Guardian and the others chose to fight back against the Great Beasts and succeeded in sending the Beasts back to their shadow lands. The team fully expected to die once more as a result of breaking Sasquatch’s pact. When they realized the truth – that Alpha Flight would continue to live as long as Death was dead – it galvanized the team back into action. They joined Snowbird’s comrades in the God Squad and the other surviving defenders of the universe in the war against Mikaboshi. [Chaos War: Alpha Flight #1] When Hercules and his allies finally defeated the Chaos King and reversed his machinations, Alpha Flight remained permanently in the realm of the living and returned to their lives. [Chaos War #5]

Since their latest resurrection, Guardian and Vindicator have returned home to Canada with the rest of the team and renewed their lives as national super-heroes. Presently, they are attempting to reclaim custody of their young daughter, who was assigned new guardians after their deaths. [Alpha Flight (4th series) #0.1]