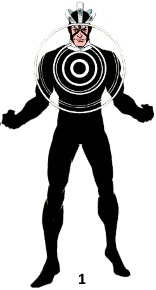 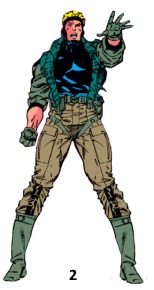 1) Havok was given his first costume by Larry Trask after his Sentinels captured him. The strange headgear with a special gemstone in its center and special circuits in the costume limited his energy powers to a controllable degree. The pulsating circles on the chest indicate the amount of cosmic energies Havok has stored. Although Alex later learned to control his plasma blasts, he continued to wear this outfit for a very long time. [X-Men (1st series) #58]

2) Emerging amnesiac from the Siege Perilous, Havok was easily manipulated into becoming a Genoshan Magistrate and received the regular uniform worn by the island nation’s troops. [Uncanny X-Men (1st series) #270] 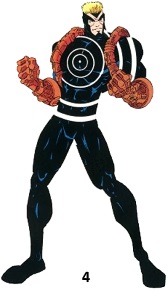 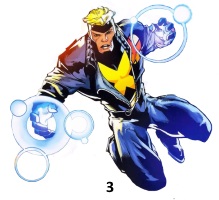 3) When Havok accepted to lead the new governmentally sanctioned X-Factor, he was given a new uniform that went along with a blue and yellow team look. Havok’s outfit consisted of blue baggy pants, a blue shirt with a huge, yellow X on the chest, a dark leather jacket with an X-symbol over it and gloves. [X-Factor (1st series) #71] While Polaris eventually changed her outfit, the other members of this group left one by one, leaving Havok the last one still wearing this team look.

-) When his powers flared up for reasons unknown, Havok was forced to wear the black containment suit once more, though without the headgear. Fearing to accidentally harm an innocent bystander, Havok wore the suit all the time beneath his regular clothes. [X-Factor (1st series) #113]

4) Havok was eventually kidnapped by the Brotherhood and experimented on. When he next showed up, apparently brainwashed by the Dark Beast, he was wearing a modified version of his containment suit, with bulky red gloves and red shoulder straps. This gear functioned as an anti-gravity harness, enabling him to levitate. [X-Factor (1st series) #125] 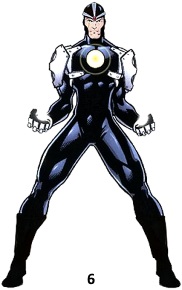 5) Taking over the body of his counterpart in the Mutant X universe, Alex also found himself wearing his doppelganger's costume. It was a very elegant and simple, dark blue version of his containment suit, with golden belt and armbands. [Mutant X #1]

6) When he awakened from his coma, Alex adopted a sleek black costume with armored elements on his arms, hands and shoulders. This costume featured a skullcap with toned down silver ornamentation that resembled that of his original uniform. Unlike his original, this costume did not include a face mask. Heavy black boots completed the look. [Uncanny X-Men (1st series) #423]

7) Havok soon switched to a similar costume that included clunky, silver gauntlets, silver boots and knee pads. This costume retained the modified skullcap from his previous costume and added a large, blue visor made from some form of translucent plexiglas. It also featured a large, round metal register of some sort in the center of his chest, which glowed with his power. Radiating from this register were power lines that ran across his chest and down his arms. A traditional X symbol rested on his waist. Alex quickly dropped the skullcap and visor and began wearing a headpiece that left his hair free. The X symbol also disappeared to be replaced by a "belt" composed of he same glowing power lines that radiated from his chest. [X-Men (2nd series) #157, 166] 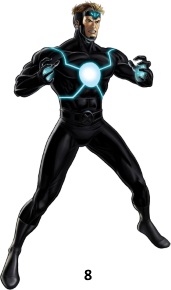 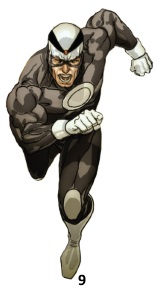 8) Alex later simplified his costume further. Gone were the gauntlets and heavy chest piece. Instead, he wore a simple, black body suit with a glowing circle his chest with five glowing lines extending from it. As with his previous costume, he wore a headpiece that left his hair and face free. [Uncanny X-Men (1st series) #475]

9) Havok wore another version of his traditional costume when joining the Avengers. This version included white gloves and boots atop his standard black bodysuit. In addition, the bands on his headpiece were not three-dimensional, but merely a part of the cowl's design. [Uncanny Avengers (1st series) #1]

10) During his time on Planet X, Havok updated his costume to a more high tech looking version. Still a black body suit, the costume also retained the glowing white circle on his chest, but added an illuminated ring around his neck. On his head, he wore a helmet with goggles and three, glowing white bands radiating out from a red gem on his forehead. [Uncanny Avengers (1st series) #18]

--) After time travelling back to the present, Alex was back in his previous costume. While inverted, Havok continued to wear the Avengers version of his classic costume, with a small metal plating over the scarred portion of his face. After getting his mind and body restored, Havok went back to the fully classic costume, complete with three-dimensional rings on his cowl.