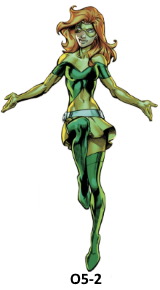 1) Like the other original X-Men and even many of the group’s later members, Jean was given a standard blue and gold training uniform by Xavier upon joining the team. [X-Men (1st series) #1]

O5-1) The original five X-Men received new team uniforms when they came to live at the New Xavier School. Jean's costume followed the same basic pattern as the others, with green accents to highlight her red hair. She neglected any mask or cowl, keeping her face and hair exposed. [All-New X-Men (1st series) #18]

O5-3) Staying with the green and yellow colors, Marvel Girl revised her costume into a full body jumpsuit. The basic green suit had a yellow 'X' on the chest and belt stylings, with black sleeves and as a secondary color for the pants. She wore 'X' buckles on her boots and a windbreaker over her costume with a similar pattern. [X-Men: Blue #1] 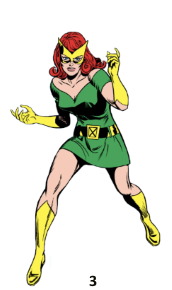 2) Early in the X-Men's career, Jean redesigned the training uniforms. While those of her male teammates more or less stayed the same, her own costume changed into a more female version. The mask no longer covered her entire head and the costume was now low-necked. Additionally, it had a new red belt. [X-Men (1st series) #27]

3) After the team had proved themselves in battle time and again, Xavier rewarded them with the right of individual costumes. This set was again designed by Jean, whom Xavier had secretly told of this plan before. Jean’s rather revealing green mini-dress mostly had long sleeves, though on a few occasions was also shown with short sleeves. Yellow boots, gloves along with a belt and a facemask in the same color completed the outfit. [X-Men (1st series) #39]

-) At a time when all her costumes were either in the laundry or torn, Jean returned to wearing a training outfit, again slightly modified. She then decided to keep it, partially for nostalgia reasons, [X-Men: The Hidden Years #8] and she eventually alternated between the two looks.

4) After the Phoenix Force duplicated Jean Grey’s body and infused it with some of her life-force and essence, it was intoxicated with human experiences and believed herself to be the one, true Jean Grey reborn. The X-Men had no reason to doubt her and considered the new costume as a symbolic expression of that rebirth. Phoenix wore a green body suit with a black neck area. Long opera gloves and over-knee boots, as well as a sash were made of some golden fabric that almost looked like liquid metal. The clip of the sash as well as the logo on her chest were stylized Phoenix symbols. [X-Men (1st series) #101] 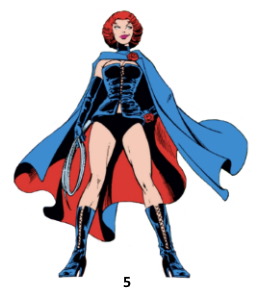 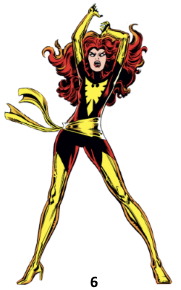 5) When Phoenix was manipulated by Mastermind into joining the Hellfire Club as their Black Queen, she was dressed in the traditional garbs that fit the Hellfire club’s strict dress code: a black corset and panties, black boots, opera gloves and a dark cape that was colored red on the inside. [X-Men (1st series) #132]

6) When she no longer could repress the dark hungers inside herself, Phoenix transformed into Dark Phoenix. Her costume too changed. Despite the color shift from green to red, this version no longer had a black neckpiece and the chest emblem was much bigger. [X-Men (1st series) #137] 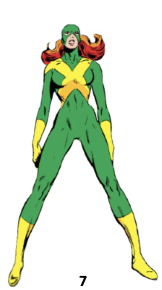 7/8) After Jean Grey was found alive, the original five X-Men reunited and they came up with the idea of X-Factor. To the media, they acted as a mutant hunting group, while secretly they were trying to help mutants to handle their powers. As cover they wore a new set of costumes, calling themselves X-Terminators, whenever they used their powers in public. [X-Factor (1st series) #1] Not before long, Jean again replaced the head-covering mask of the X-Terminators costume with one that only hid her face.

9) After they saved New York from Apocalypse and his Horsemen, X-Factor finally ended their charade and exposed their cover to the media. They became celebrities and a thankful designer, whom the team had rescued earlier that day, created a new look for them. The new costumes were close to the X-Terminator uniforms but the color schemes were different. Jean’s changed from green and yellow, to red and yellow. [X-Factor (1st series) #26]

10) While on a temporary leave of absence from X-Factor, Jean ran into Banshee and Forge who were looking for the then-missing X-Men. During the time she helped them out, she wore a new standard X-uniform, one that had been modified by Moira MacTaggert and contained lots of several functions like temperature regulation and body armor. [Uncanny X-Men (1st series) #262] Despite these added functions, Jean didn’t feel comfortable in this outfit and returned to her X-Factor look once she returned to home.

11) Shortly afterwards, X-Factor settled for a new team look. Whereas Archangel and Beast stuck to their previous looks, Cyclops, Jean and Iceman all wore identical uniforms. These costumes were a nod to the X-Men’s standard costumes, as they were in the same blue and gold color scheme. [X-Factor (1st series) #63]

12) Only a few weeks later, X-Factor rejoined the X-Men and again new costumes were in order, with every member of the two strike forces receiving an individual costume. Jean’s orange and blue colored outfit seemed rather unspectacular, but as she ended up wearing it for a long time, she must have taken a liking to that look. [X-Men (2nd series) #1]

-) After the Summers couple retired from the X-Men, Jean troubled Scott with the decision to adopt a new costume that was a simulacrum of the one that Phoenix had worn while posing as her. However, Jean later explained that she had come to terms with her past. No longer afraid of the vast power levels she might reach, and began to fully explore her telepathic and telekinetic abilities. The costume was her way to outwardly express her inner decision towards this new beginning. [Uncanny X-Men (1st series) #354]

13) A few months after Cyclops became the new host body for Apocalypse and apparently died, Jean rejoined the X-Men in a new red and yellow costume. It sported a huge Phoenix logo that stretched out from her shoulders to her lower abdomen. [Uncanny X-Men (1st series) #381]

14) When the school’s secret of harboring mutants was publicly outed, Xavier changed the entire look of his students. Instead of wearing bright costumes, they now used some leather outfits that almost looked like street clothes. The members of the X-Men had a vast supply of different shirts, coats and jackets from which to pick. [Uncanny X-Men (1st series) #394]

15) As Phoenix awakes 150 years in the future, she is in a full-blown fiery energy form. Under Sublime’s control, she wears low-cut black leather pants, opera gloves in the same style and a black phoenix symbol on her chest. [New X-Men (1st series) #153]

16) In the so-called White Hot Room Jean faced an entire host of Phoenixes in differently colored costumes, the color apparently being more than just decorative. Jean herself wore a white version of the standard Phoenix outfit and was referred to as White Phoenix of the Crown, apparently one of the highest ranks. [New X-Men (1st series) #154] The costume was also worn by Phoenix when she encountered Death after sacrificing herself on the moon. [Classic X-Men #43]

-) When Jean briefly returned from the White Hot Room as a result of some renegade Shi’ar bringing the Phoenix back before its time, she was constantly alternating between the green and the red Phoenix costume, only to settle for the white version upon departing from this plane of existence. [X-Men: Phoenix - Endsong #1-5]

17) After returning to life, Jean adopted a costume reminiscent of her Gold Strike Force-era look, one of the few she had worn in recent years with no Phoenix imagery. While the basic design was similar, this suit used red as a secondary color instead of yellow. She also wore blue boots over her leggings. [X-Men: Red #1]

-) With the arrival of the House of X and the mutant nation-state of Krakoa, Jean has returned to her classic identity as Marvel Girl and the mini-dress costume associated with it. [House of X #1]