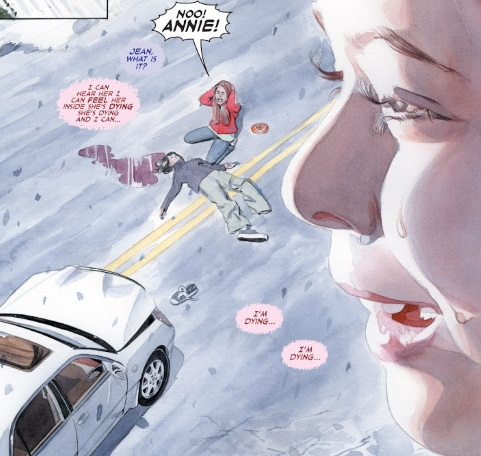 Jean Grey is the second child college professor John Grey and his wife Elaine. Growing up with her older sister, Sara, Jean had a happy childhood that abruptly came to an end when her best friend, Annie Richardson, was hit by a car. Barely ten years old, Jean held her dying friend in her arms. In that instant, her mutant telepathy kicked in and she unwittingly read Annie‘s mind as she slowly slipped away to death. Even though she didn’t understand her telepathy, Jean embraced Annie’s soul and tried to protect it from the darkness that was closing in, but there was nothing she could do. Annie died, and it seemed that a part of Jean died as well.

Afterwards, she became a withdrawn, almost haunted child, and none of the specialists that her parents consulted over the next three years were able to get Jean out of her depression. That changed when somebody told them of Professor Charles Xavier.  He discovered that the girl was 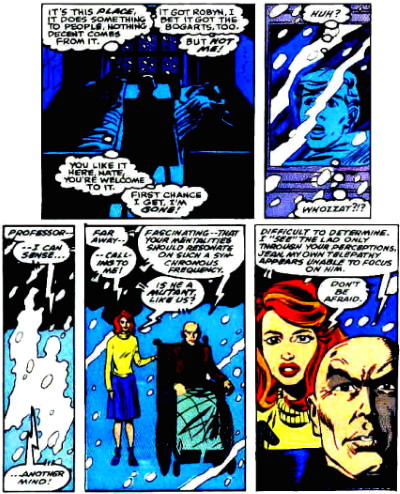 a mutant and not able to cope with her telepathy yet. Therefore, he decided to mentally block Jean's access to it until she was mature enough to properly control it. He also helped Jean to realize the potential of her second mutant ability as a telekinetic. While she continued to live with her parents, she would regularly meet with Xavier for training sessions, which technically makes her his first student (but not his first X-Man). [Bizarre Adventures #27, Uncanny X-Men (1st series) #308]

From time to time, Xavier would temporarily remove Jean’s mental blocks to see whether she was able to handle her telepathy yet. On one of these occasions, Jean established mental contact with a teenager living in an orphanage several hundred miles away. At the time, neither Jean nor the professor could have known that this boy by the name of Scott Summers would eventually hold a very special place in their hearts. [Classic X-Men #42]

Years later, when the professor had already recruited four other mutants, one of them being Scott Summers aka Cyclops, Jean officially enrolled at Xavier’s school and joined the X-Men under the codename Marvel Girl. Jean and Xavier hid the true extent of their history together at first, presumably to keep the other X-Men from feeling they received less-preferential treatment. Only shortly afterwards, the team made its public debut, fighting Magneto. Inexperienced as they were, the X-Men were unable to capture him, but they at least managed to thwart his plans. [X-Men (1st series) #1]

From the moment they were introduced to Jean, most of the male X-Men heavily flirted with the young redhead, but soon some of the romantic tension gave way for camaraderie and mutual

friendships to evolve. Only Warren Worthington, aka the Angel, continued to overtly show social interest in Jean. However, she was more attracted to Scott Summers, who too harbored secret feelings for her but dared not show them since he was afraid of hurting her with his deadly optic beams. Additionally, he thought that his duties as the X-Men’s field leader would not allow a romantic relationship with a teammate. (For his part, Hank McCoy aka the Beast saw the competition brewing between Scott and Warren, and decided to repress his own interest in Jean.) [X-Men (1st series) #7-8, Uncanny X-Men (1st series) #308, All-New X-Men (1st series) #15]

The X-Men's natural growth as teammates was interrupted by the arrival of Hank McCoy from the future. Weary and covered with blue fur, future Beast told the original five X-Men of his time, where Cyclops has killed Professor Xavier and linked up with Magneto to found a mutant revolution. The disbelieving X-Men traveled into the future with Hank to see for themselves and found the Xavier School for Gifted Youngsters replaced by the Jean Grey School for Higher Learning. The Jean Grey memorial school. The shock of the future catalyzed Jean's latent 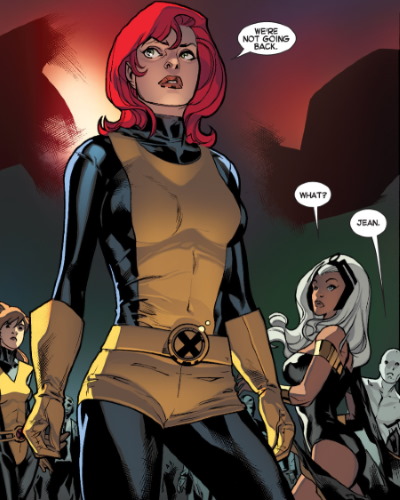 telepathic powers, causing them to emerge without the professor's guidance. Marvel Girl and the X-Men stole a Blackbird and confronted future Cyclops and Magneto for themselves, giving Jean a glimpse inside old Scott's head. She saw for herself that everything was true, and Scott had killed the professor.

Back at the mansion, the X-Men learned Beast had brought them to the future because he was dying and wanted to make one last desperate stab at putting things right. Jean helped telepathically to coordinate the two Hanks in finding a solution for old Hank's deteriorating condition. During the telepathic counsel, the elder Beast allowed Jean into his mind and she saw her entire life flash before her eyes: her marriage, her cloning, her various deaths. When Hank was stabilized, Jean declared the original five weren't going anywhere. She led a vote to keep the original X-Men in the future until they fixed what a mess it had become. Only once that was done would they allow themselves to be mind-wiped and returned to the past. Overwhelmed by the extent of what she witnessed in Beast's mind, Jean also told Scott to stay the hell away from her. [All-New X-Men (1st series) #1-5]

The next day, Kitty Pryde stepped forward to act as instructor for the original five. So long as they were in the future, the team's training would continue under "Professor K's" tutelage. Kitty gave Jean her earliest instruction on controlling her telepathy, fittingly based on instruction Jean herself gave Kitty in the past. The adjustment wasn't easy, however. Jean started off having trouble with accidentally reading minds, but later had trouble with deliberately reading minds without permission. When Angel (the only original five member who voted to return home) tried to access the time machine himself, Jean used her untrained telepathy to "fix" his mind, calming him down and pushing him into staying. Scott also independently discovered their wedding invitations, making the silence between the two friends even louder. Jean read his mind without his permission to discover Scott had met with the mutant criminal Mystique, another violation on Jean's growing list. [All-New X-Men (1st series) #6-8] 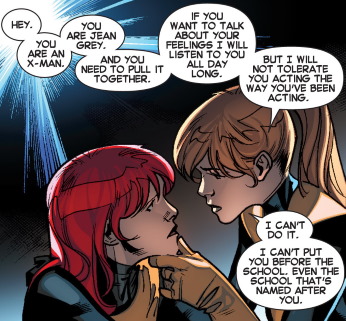 Matters came to a head when the adult Cyclops arrived at the school to offer any mutant present an alternative, and a place in his New Xavier School. When Angel accepted, Jean tried telepathically to force him back into the mansion against his will. This led to a psychic battle between Jean and the departing Stepford Cuckoos, who easily dismantled the young Jean's mental defenses. After Angel left, Jean ran off on her own and Kitty Pryde sought her out. Jean apologized and explained how she just felt like everything was slipping away and beyond her control since she came to the future. Kitty understood and sympathized with Jean, but also warned her that, if she continued abusing her telepathy like she had done, the X-Men would shut her down entirely, no matter who she was supposed to grow up to be. [All-New X-Men (1st series) #10-11]

Jean was a slow learner. When the X-Men crossed paths with the Avengers Unity Squad, she saw the Decimation inside Scarlet Witch's mind and freaked out. Learning about M-Day like that caused Jean to lash out and only further increased the tensions between the Avengers and the X-Men. When they pursued Mystique and her Brotherhood for posing as the X-Men while committing robberies, Jean used a psychic illusion of the Phoenix Force manifesting in her to scare the villains, not realizing the effect seeing the Phoenix would have on Wolverine and Kitty as well. [All-New X-Men (1st series) #12-14]

Jean also read the mind of future Hank and discovered he had once been in love with her, 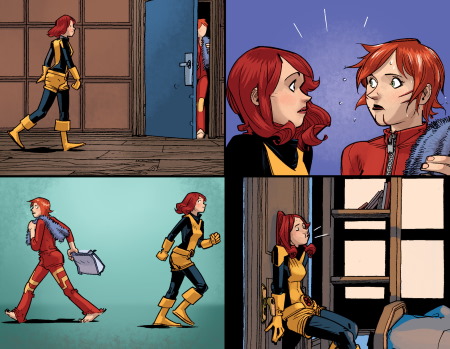 meaning young Hank felt that way about her now. Jean confronted her Hank and got him to admit his feelings, which he had suppressed since she seemed to prefer Warren and Scott. Now, however, Jean was feeling trapped by her future choices and desperately wanted to make a different choice just to show that fate it wasn't the boss of her. Jean and Hank kissed each other, but neither of them were sure what it really meant. (Oh, and when she and Rachel Grey passed each other in the hallway, they both decided to peace out and not even try to address THEIR situation.) [All-New X-Men (1st series) #15]