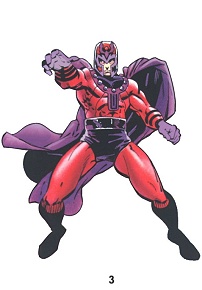 1) Joseph's creator, Astra, clothed him in this form-fitting metallic suit that contained many elements that were similar to those of her own costume. It was black bodysuit accented with wavy bands of silver-blue and purple metal. [X-Men (2nd series) #86]

2) When Joseph joined the X-Men, he began wearing the standard X-Men uniform in blue and gold. He wore several versions of this costume throughout his short career as an X-Man. This costume served as Joseph's default costume until his first death. [X-Men (2nd series) #55]

3) Joseph briefly worked with a group of Acolytes, who were convinced he was the one true Master of Magnetism. In the hopes of discovering his true origins, Joseph played the role and wore Magneto's classic purple and red costume complete with his signature helmet and flowing purple cape. [Magneto (1st series) #2] 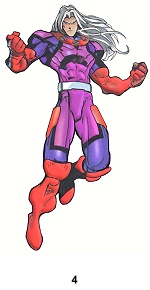 4) When the X-Men were summoned into deep space to aid the Shi'ar Empire against the Phalanx, the team left behind their standard uniforms. Like the rest of the X-Men, Joseph wore a Shi'ar mining suit they found onboard the starship they were on. Joseph's suit was reminiscent of Magneto's costumes. It consisted of a form-fitting body suit in shades of red, purple and hot pink with knee-high red boots. Around the neck was a metal ring with large screw-like studs, which was very similar to the one worn by Magneto. A silver metal belt completed this outfit. [Uncanny X-Men (1st series) #342] Joseph returned to the standard X-Men uniform almost immediately upon returning to Earth.

--) After being resurrected and brainwashed by Astra, Joseph again donned Magneto’s classic purple and red costume, posing as the real Master of Magnetism on several occasions.