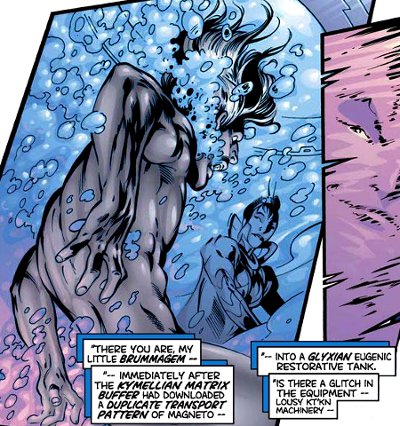 The man called Joseph is a clone of Magneto. He was created in a laboratory between dimensional planes by the woman known as Astra. When the space station Avalon was destroyed, Colossus carried the comatose Magneto into one of the escape pods, only to crash-land somewhere in Antarctica. It was Astra who found the pod and stole Magneto’s body before Colossus woke up, this being the perfect chance to get revenge on him for the way he had treated her when she was one of the members of his original Brotherhood of Evil Mutants. Killing Magneto would have been far too easy, Astra wanted to humiliate him. Astra proceeded to rebuild Magnus' damaged mind, in order to create a copy of him with full mental faculties. She used both Kymellian and Glyxian technology to create a perfect mental and genetic copy of Magneto at a younger age, without the self-imposed limits he had placed on his powers. 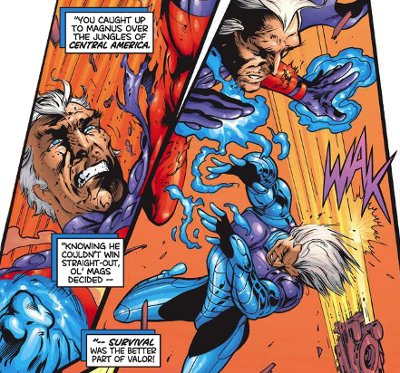 Astra then pitted her creation against the newly restored Magneto, laughing out loud as Magneto, unable to best his younger self in combat, was forced to flee. Believing to have seen enough, Astra ordered her creation to fulfill the task he had already started, while she teleported away to space. The clone caught up with Magneto over Central America, and the pyrotechnics of their confrontation could be seen for miles. In order to survive, Magneto was forced to resort to trickery, and struck his clone in the back of the head with a piece of debris, sending him falling to Earth. The impact destroyed what little memories the younger Magneto had, and he wandered the jungle for days, amnesiac. [X-Men (2nd series) #86] Meanwhile, the real Magneto went into hiding, to properly recover.

Eventually, he stumbled upon a Guatemala mission for children and was taken in by Sister Maria, the nun in charge. One of the children living 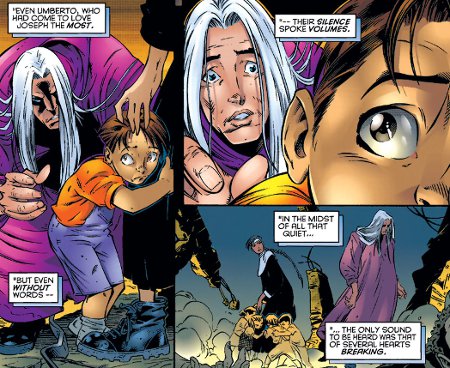 there decided to name him Joseph. Helping out around the mission and its farmland, Joseph re-learned to use his magnetic powers and vainly tried to remember his past. One day, Joseph met Colonel Ramos, a local criminal who was extorting "protection" money from the missionaries. Seeing use for the young man's abilities, Ramos had the children and Sister Maria kidnapped in order to force Joseph to work for his associates. Instead, Joseph forced the colonel to reveal where the captives were. Arriving at the criminal's hideout, Joseph slaughtered all present in order to get to the children. The children, however, were shocked and horrified by his actions. The next day, Joseph and Sister Maria agreed he should go to America and find the X-Men, so that he could learn how to use his powers responsibly. [Uncanny X-Men (1st series) #327]

On his way to New York, Joseph passed through a small town in South Carolina, where a recruitment drive for Humanity's Last Stand was going on. Seeing the intense fear and loathing in the hearts of the men and women he met, Joseph decided to join them, and subvert their movement from within. Days later, he was posing as one of Trask’s shepherd guards when the former X-Man Rogue was captured and brought in for interrogation. When Trask and his ally Bastion decided to torch the Last Stand compound, making martyrs of their followers and eliminating a dangerous mutant in one felt swoop. Joseph's fellow guard refused to participate in the death of his friends, so Bastion shot him dead. In retaliation, Joseph used his magnetic powers to destroy the lab he was in and free Rogue.

At first, she attacked him, believing him to be the Magneto of old, who was just pretending to not remember his past and trying to get her involved in 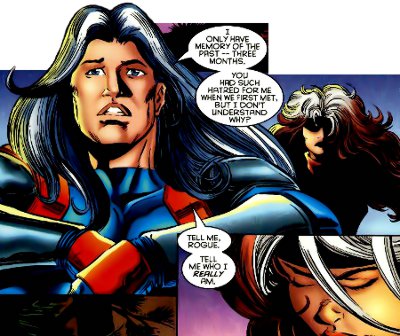 one of his schemes. However, from his reaction, she saw that he was genuine about his amnesia. Together, they halted Trask and Bastion's plans, with Rogue urging Joseph not to kill their attackers. She saw the chance for “Magneto” to become a better person and didn’t want him to revert back to his old ways. For the same reason, she didn’t tell him too much of his past. Rogue decided to help bring Joseph to the X-Men, in order to determine what was to be done with him. To avoid detection, they traveled incognito. [X-Men (2nd series) #53, X-Men Unlimited (1st series) #11] 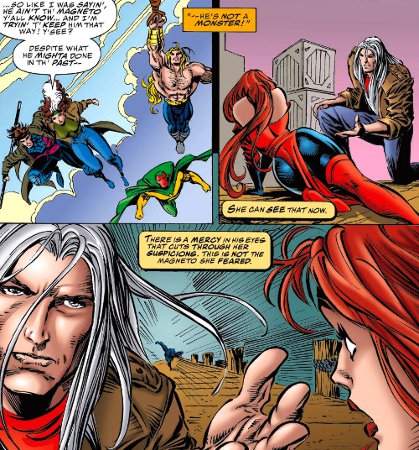 However, the X-Men had just been struck at from within by their mentor Charles Xavier, who had become the megalomaniacal entity known as Onslaught and attacked his students. Apparently when Xavier had mind-wiped Magneto months ago, a seed of Magnus's dark ego had infected Xavier, causing him to spawn a new malevolent lifeform. Joined by the Avengers, the X-Men believed that Magneto had somehow been deliberately responsible for Onslaught, and sent a team out looking for him. Instead, they found Joseph and Rogue. After a brief battle, the heroes accepted Joseph as an amnesiac Magneto; especially the Scarlet Witch, Magneto’s daughter, who had suffered under the man like no one else, felt that this was a different man when he gently reached out to her.

Joseph and Rogue offered to return with the heroes to battle Onslaught in New York, where he was constantly exposed to people who had known Magneto and reminded Joseph of his past actions. Even some of the human citizens that Joseph rescued cried out in terror, thinking him to be the true master of magnetism and believing him responsible for the city’s destruction that had actually been caused by Onslaught. With every bit of information he learned, Joseph became more depressed and wondered what kind of man he had been, and the attempts of Xavier and Captain America to cheer him up only helped to a certain degree. After Onslaught was defeated, Joseph remained with the X-Men as a member, though some like Wolverine and Gambit were highly uneasy around him. [Onslaught crossover, X-Men (2nd series) #57]

In an attempt to learn more about himself, Joseph tried to open the X-Men’s files on Magneto, but he was given no access to them. Instead, he had the computer search for Avalon, Magneto’s crashed space station, and learned that its remains were scattered all over the Andes in South America. Although Rogue asked Joseph not to leave, he felt that he had to research his past and departed. Once there, Joseph found a group of Acolytes, Magneto's former disciples, who were worshipping the remains of the space station. Uncovering Magneto's personal quarters from the fallen station, Joseph was horrified when he accessed the man’s logbook entries and heard the hatred in his voice.

Right then, he was approached by Fabian Cortez, who, while working together with Amelia Voght, needed Joseph to pretend to be the resurrected Magneto in order to stop current Acolyte leader, Exodus. Apparently, Exodus planned to re-raise Avalon, ignorant to the massive worldwide environmental catastrophes this would cause. Reluctantly, Joseph agreed to pretend he had Magneto's full memories and convinced Exodus to put off his plan. All might've been well, but Cortez deliberately sabotaged the rule by giving Joseph false information on Magneto's history, which led to him being unable to convince Exodus with his posturing. However, Joseph not only had to deal with a division in the Acolytes' ranks, for they had also been tracked down by operatives of Humanity's Last Stand, who intended to get rid of Magneto’s 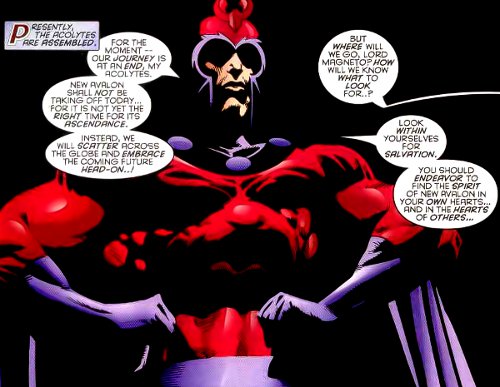 followers once and for all with a nuclear strike. Both problems ended up being solving at once, for Joseph's feats of power and devotion to save the Acolytes from the human's assault convinced everyone, even Exodus, that he was for all intents and purposes the real Magneto. For a brief instant, Joseph even convinced himself that he was really Magneto and was no longer pretending. Despite having learned next to nothing of Magneto’s history, Joseph had at least gained some insight to the man’s personality. Never wanting to become like him, Joseph asked the Acolytes to disband and returned to his place among the X-Men. [Magneto #1-4]

As Joseph and Rogue grew closer, considerable friction developed at an equal rate between he and Gambit. The two men actually came to blows over a misunderstanding, but Rogue ended the fight,

telling them that she expected more and better from them. At the same time, the X-Men were slowly lecturing Joseph about his past, using the Danger Room’s holographic systems to actually show him their past confrontations with the master of magnetism. Everyone present, including houseguest Quicksilver, was surprised how deeply changed Joseph was from Magneto. He was friendly and cared about others; Rogue for example, trying to find a way for her to overcome her inability to touch others. Likewise, despite not remembering the things he had done to his supposed son, Quicksilver, he apologized to him, genuinely regretting any harm he might have caused him. [Uncanny X-Men (1st series) #338, X-Men (2nd series) #58-59]