Shortly afterwards, the X-Men were caught up in one of the Gamesmaster’s schemes. He took control of every mind in Salem Center and made the X-Men believe that they had achieved their goal: mutants were now publicly accepted and treated like celebrities. Only, for his game to work, the Gamesmaster had kidnapped Jean Grey, the one X-Man who would have seen through the deception right from the start. Joseph’s mind too was hard to manipulate, for he sensed something being amiss and realized that Jean was absent. Once he had convinced Rogue and Gambit at least to consider him being right, they tracked down Jean, only to be confronted by the Gamesmaster. He challenged Joseph, promising to make all the positive changes permanent if he was willing to sacrifice one life – Gambit’s. The world would be a better place, and the man no longer in the way for a relationship with Rogue. Faced with this temptation, Joseph still did the right thing. While pretending to perform the kill, he secretly freed Jean and together they fought the Gamesmaster off. [X-Men Annual ‘97] 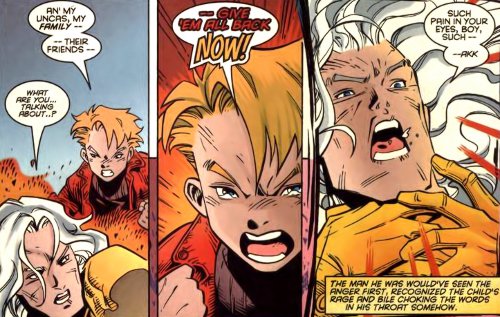 Not much later, Joseph found himself spirited to Dunfee, Illinois. At the time, several X-Men and the wards of Generation X, including Franklin Richards, were vacationing there. While alone, Franklin had reached out with his reality-altering powers, and transported Joseph there, blaming him for his parents’ apparent death, as they had sacrificed their lives against Onslaught. The boy wouldn’t listen to reason and threatened to kill Joseph if he wouldn’t return his parents to him. This time, it was Gambit who saved his rival, by keeping young Franklin occupied long enough till his powers were negated by Leech. [X-Men Unlimited (1st series) #14] 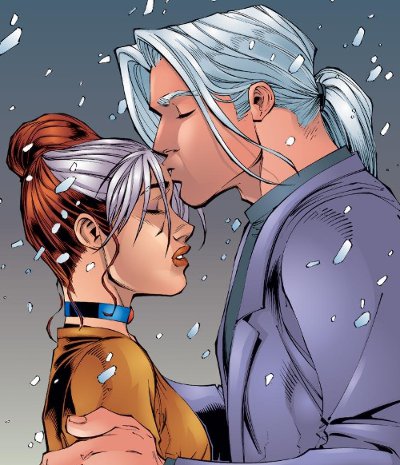 On Christmas Eve, Joseph manages to surprise Rogue with a special gift. Over the past weeks, he had assembled components from Xavier's old Z'Nox psi-shielding chamber and re-arranged them into a new apparatus. While standing under it, Rogue could safely touch anyone, without absorbing their memories and personalities. They tried it out with Joseph kissing the grateful X-woman on the forehead. [Uncanny X-Men (1st series) #341]

Later that night, a confrontation with Gladiator of the Shi'ar Imperial Guard led to Joseph, Rogue and a small group of X-Men being teleported to the Shi'ar Empire, which was under attack by the alien Phalanx. 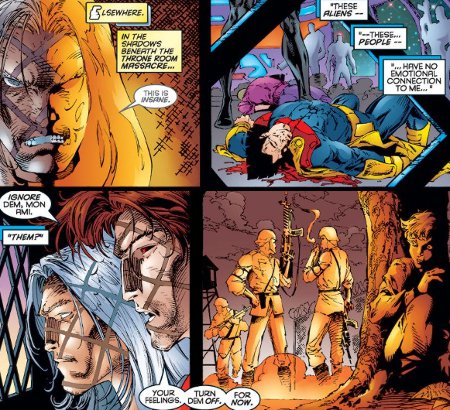 In fact, the entire Imperium was at stake, for the Phalanx were about to reach the breeding chambers on the Shi’ar homeworld, where they could infect and assimilate the next generation of the Shi’ar. The X-Men were accompanied by Deathbird, a member of the Shi'ar Imperial family and former enemy of the X-Men, in their battles against the Phalanx and ultimately they succeeded. To a large degree, this victory was because of Joseph lashing out in anger. Somehow, during the battles, the option of a genocide being committed in front of his eyes, he experienced some sort of deja vu, accessing Magneto’s memories of the Holocaust, which must have been copied along when he was cloned. [Uncanny X-Men (1st series) #342-345]

On their way back to Earth, the X-Men’s ship was damaged, and they crash-landed in the Savage Land in Antarctica. They were confronted by a trio of 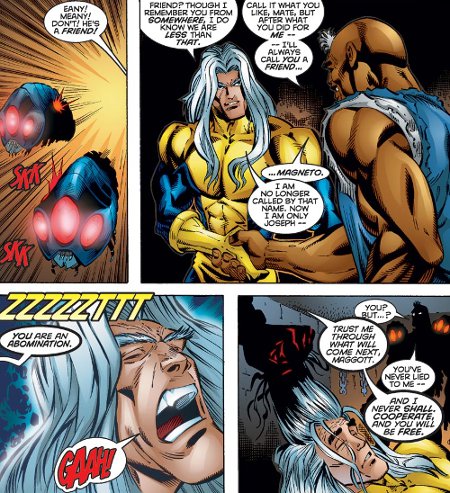 bounty hunters from Gambit's past and Nanny, a robot guard that was maintaining one of Magneto’s old bases. Eventually, the team ended up separated and lost in the base. Wandering around, Joseph bumped into the mysterious Maggott, who had just been teleported there, along with former X-Men Archangel and Psylocke. Joseph was rather surprised that Maggott not only seemed to recognize him but, in fact, considered him a friend and was happy to see him. Before they could further talk, though, Joseph was struck from behind. When he woke up, the trial of Gambit had already been started, all of the present X-Men being forced to participate by a man wearing the guise of Erik the Red. The exposure of Gambit’s past dealings with Sinister and the Marauders led to him being left behind in Antarctica, while Joseph and the other X-Men returned to the mansion in Westchester, unaware that "Erik the Red" was in fact the true Magneto. [Uncanny X-Men (1st series) #347-350]

Over the next days, the X-Men were busy making repairs to their damaged mansion, and Maggott avoided every contact with Joseph, for he had sworn his attacker – the true Magneto – to secrecy. Trying to keep her earlier promise to help Joseph uncover his past, she even went as far as suggesting for her to absorb his memories but, considering this a too risky move, he declined. Then, while watching a TV announcement about some possible “cure” for mutants, Joseph became rather mad and suddenly had a seizure. Rogue found him comatose and gave him CPR and mouth-to-mouth until a few second later, Joseph came around again and seemed fine. The cause for this strange effect was never found. [Uncanny X-Men (1st series) #353-354] 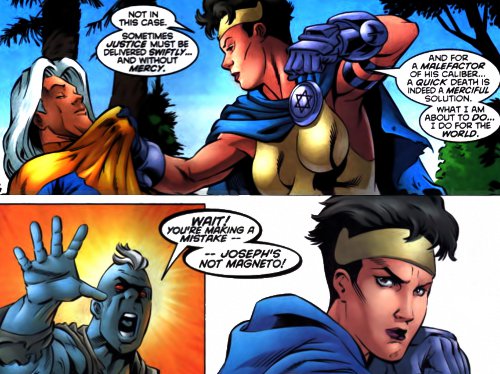 A couple of days later, the Mossad agent Sabra arrived, intent to make “Magneto“ pay for his crimes. For a brief instant, Maggott pondered to let her kill Joseph, but he ultimately did the right thing by telling the truth. Joseph was even more surprised by the fact that he was not Magneto than Sabra, and both of them wanted to uncover the full truth, which is why he left with her for Israel, in order to once and for all determine his true nature. They had Maggott promise not to tell anyone why they had left, as not to jeopardize their investigations. Sabra reasoned that, for Magneto to leave the “imposter“ Joseph among the X-Men, he must have been planning some bigger scheme. [X-Men (2nd series) #73]

For weeks, Joseph lived on some Israeli military base where he was subjected to a number of tests and examinations to determine his true nature. During this time, he was visited by Quicksilver, who in the meantime had gotten over the fact that he was now older than his supposed father. Pietro encouraged Joseph that, even if he was not the true Magneto, he was the kind of person he had always hoped his father would have been. Eventually, the scientists uncovered evidence that Joseph was artificially created from cloned cells of Magneto. Wanting some time for himself to take in this knowledge, Joseph wandered off into the desert, where he was found by Astra. She knocked him out and took him to a secret lair, where, after relating his entire origin to him, she voiced her disappointment over her creation’s performance. [X-Men: Magneto War, Uncanny X-Men (1st series) #366, X-Men (2nd series) #86]

In the meantime, Magneto had fully recovered and was once more blackmailing all of Earth’s governments by manipulating the planet’s electro-magnetic field from within his base near the magnetic North Pole. Astra forced Joseph into battling Magneto, seeing the chance to reach two goals at once – getting rid of her archenemy and enslaving the world by continuing where Magneto left off. The timely arrival of the X-Men thwarted her plans, though. With some members distracting Magneto and others keeping Astra busy, Joseph set to work re-aligning Earth’s electromagnetic field, which was spinning out of control by the forces unleashed. Joseph's cloned cells couldn't handle the unlimited energies being channeled by his proximity to the magnetic north pole, and his physical form was destroyed, while his magnetic power and mental essence were merged with the EM field. His sacrifice saved the Earth and everything on it. [Uncanny X-Men (1st series) #367, X-Men (2nd series) #87]