Years later, Astra returned to Magneto's base and reconstituted Joseph, drawing his essence back out of the electromagnetic field and into physical substance once more. She didn't do this out of sentiment, but out of greed. Christopher Bach, leader of the anti-mutant activist group 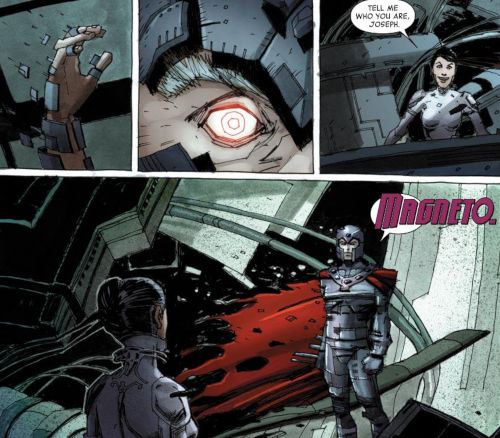 Humanity Now! was willing to harm his own people in order to drum up support for his cause. To do this, he wanted his own "Magneto" who could attack Humanity Now! rallies and feed public sentiment for his cause. Astra did her work restoring Joseph's mind, aligning it more with Magneto's traditional rhetoric than with the compassionate worldview Joseph developed as an X-Man.

Sure enough, Joseph returned to the public spotlight in classic Magneto garb, attacking a Humanity Now! group and killing forty humans while on video. This prompted a response by the 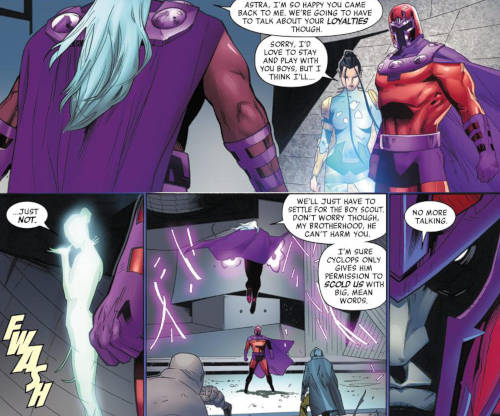 Avengers and X-Men, especially since Magneto was ostensibly one of Cyclops' teammates and most loyal supporters at this time. Magneto looked into the development himself and discovered Joseph was still alive. He found Joseph and Astra at an abandoned steel mill in the Appalachians, where Astra had also cloned a Brotherhood with Blob, Toad, Mastermind, Quicksilver and the Scarlet Witch. Joseph accused Magneto of abandoning his own philosophies by working with Xavier's children, and promised he would be the Magneto the mutant community truly needed.

Magneto escaped the fight with Joseph and his Brotherhood by capturing Astra and forcing her to teleport him away. Outside of Astra's influence, Joseph had no intent of honoring her deal with Humanity Now! He approached Bach and warned the man he was about to lose a lot more of his followers than he had intended. Joseph attacked a rally at Millennium Park in Chicago, but Magneto returned with a vengeance. Prepared this time, Magneto killed Joseph's cloned Brotherhood and fought his young doppelganger to a standstill. In the end, Magneto overwhelmed Joseph and turned him over to Cyclops and the X-Men for his crimes. [Magneto: Not a Hero #1-4]

Joseph was presumably held in the X-Brig under the jurisdiction of Danger. He would have been released when she cleared out the cells after the conflict with the Avengers. [Uncanny X-Men (2nd series) #20] Some time later, Nathaniel Grey decimated the X-Men, seemingly killing the vast majority of the mutant heroes' roster in a major battle. This emboldened the anti-mutant sentiment in the world, making times even worse for mutantkind. Joseph saw this as an opportunity to renew his commitment to Magneto's legacy, and returned to the public eye in his assumed role. He assembled a classic Brotherhood including Toad, Pyro, Avalanche, Random and Juggernaut under the guise of being the original Magneto.

In eastern Transia, a bigoted general assumed power and turned the previously mutant friendly regime on its head. "Magneto" brought out his Brotherhood to teach the Transian military a lesson. Cyclops and the remaining active X-Men confronted the Brotherhood, and learned the truth about Joseph's identity. This revelation helped Juggernaut change his mind about his allegiances and he helped the X-Men overcome Joseph's forces. As Joseph and Cyclops debated policy in the aftermath, the recently resurrected ninja telepath Kwannon arrived on the scene. Seeing Joseph as an imminent threat, she cleanly decapitated him with a swish of her katana. [Uncanny X-Men (5th series) #16] 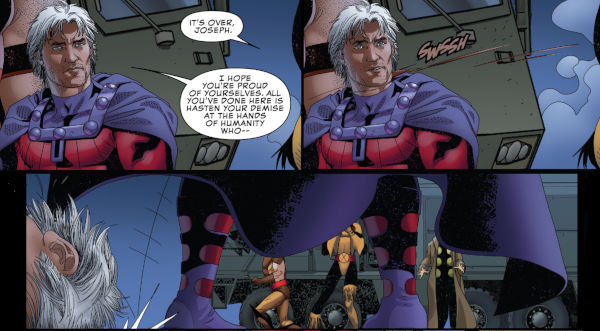