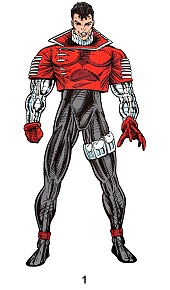 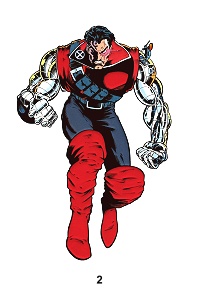 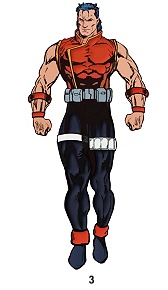 1) As Weapon X, Kane's first costume was a sleeveless gray bodysuit, exposing his mechanical arms. He wore a short-sleeved red coat with a high collar, held together by straps on the right side of his chest. The coat also had a series of bars along the arms and a small 'X' imprinted on the collar. Kane also wore red gloves and a ring of pouches on his hip. [X-Force (1st series) #2]

2) After getting a systems upgrade, Kane adopted a new sleeveless red coat similar to his previous one. He now wore a bandolier across his chest, and tall red boots that reached his knees. [Deadpool: The Circle Chase #1]

3) While working with the Clan Chosen, Kane adopted a simpler uniform consisting of a sleeveless red shirt and black pants, held up by a pocketed utility belt. He occasionally wore additional pouches around his legs, and blue gloves bound with red bands around his wrists. His future tech synth-org limbs could appear human or metallic. [Cable (1st series) #1] 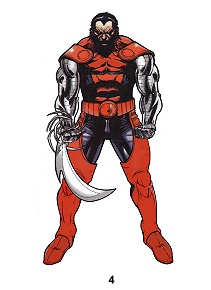 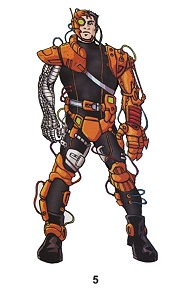 4) When allied with A.I.M., Kane wore a sleeveless black bodysuit, letting his cybernetic arms show through. This was accentuated by red chaps, a red belt with a large round buckle, and a red vest strapped down at the shoulders. [Wolverine (2nd series) #142]

5) As an agent of the new Weapon X, Kane typically wore another sleeveless black bodysuit, with two parallel orange lines striping down his chest and ending at his thighs, and a set of black boots with orange rings on the ankles. He had outfitted himself with a number of new orange bionic attachments and features, including components strapped to the right side of his face, a shoulder pad and epaulet over his original synth-org metal right arm, a new orange bionic left arm, and various other mechanical components around his waist, chest, and legs. As he continued to sell off pieces of his humanity for upgrades, more and more of Kane's body became covered with orange metal. [Deadpool (2nd series) #57]