The early life of Garrison Kane remains entirely unknown. When his parents died around his thirteenth birthday, Garrison somehow hooked up with two soldiers of fortune named G.W. Bridge and Eisenhower Canty, alias Hammer.  They taught him the business and introduced him to a 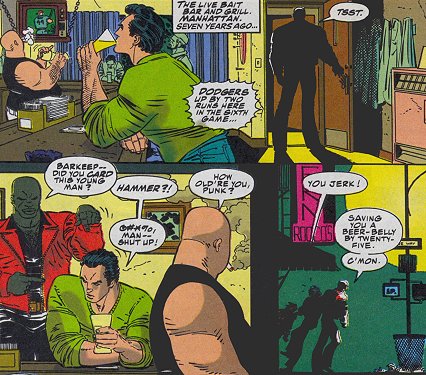 globe-trotting mercenary lifestyle. By his late teens, Kane and his two partners had joined up with Domino, Grizzly and Cable as the team of mercenaries known as the Wild Pack, a group gathered by the time-traveling cyborg (unbeknownst to them) for the purpose of helping him familiarize himself with this past era. Kane was involved in numerous mercenary actions around the globe, from Buenos Aires to Tehran to Kalula Lampur, working for both legitimate backers and less-legitimate ones like AIM. His closest friend on the Pack was Hammer, who took him under his wing, teaching the kid the ropes in the mercenary business. [Cable (1st series) #3, X-Force (1st series) #8]

The Wild Pack formed an ongoing business relationship with a reclusive financer known only as Mister Tolliver. Over the course of a year, he arranged for them to carry out several missions on his behalf. During this time, the Symkarian government challenged the group's right to the name 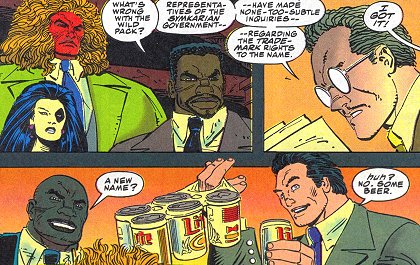 Wild Pack,  and Kane's search for some beer at Tolliver's high class chalet inadvertently suggested a replacement name: the Six Pack. Unfortunately, Tolliver had his own plans for the Six Pack, and a personal indemnity for Cable. He sent Kane and the Six Pack to clear the opposition from his opium trafficking in Afghanistan, a route maintained for him by Stryfe. Knowing the sheer hatred between Cable and Stryfe, Tolliver manipulated them into a confrontation and Cable fell into it, blowing up Tolliver's opium complex in an attempt to get at Stryfe. By breaking the contract with Tolliver, the Six Pack became wanted men, running from a collective price on their heads for more than eight months.

Kane and the rest of the team were grudgingly content to follow Cable's lead during this time, but his personal war with Stryfe led them into risks they shouldn't have taken.  He brought them to 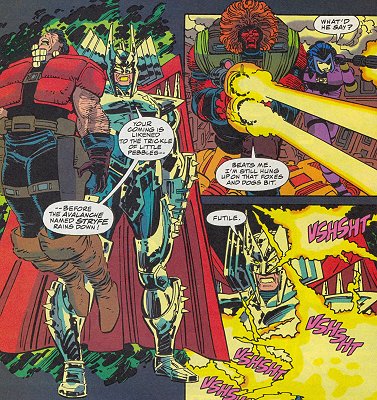 one of Stryfe's bases in Uruguay, planning to steal the information from Stryfe's computers on his activities and then blow up the complex, hopefully leaving Stryfe dead in the wake. The Chaos-bringer teleported in before they could complete the mission, however, grabbing Kane as a hostage and blocking Cable's bodyslide frequency. He demanded the info diskette back in exchange for Kane's life. Hammer began to approach Stryfe to make the deal against Cable's pleadings, and so Nate shot his teammate in the back in an attempt to retrieve the disk. Stryfe still got away with the disk and Cable time-jumped after him, leaving the Pack behind inside the exploding base. G.W. Bridge and the others managed to pull Hammer and Kane to safety and stabilize them, but Hammer would be paralyzed for the rest of his life and Kane lost an eye and all four of his limbs in the blast. [Cable: Blood & Metal #1-2]

During his recovery, Kane was apparently approached by Canadian Intelligence and inducted into the second Weapon X program, a new branch of the Department of Defense looking to recreate 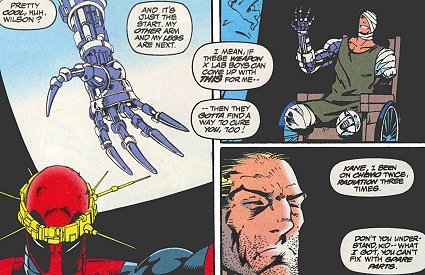 the super-soldier processes promised by the original Program. Over the next few years, Kane underwent extensive cybernetic surgery including bionic replacements for his limbs, mechanical reinforcement up his spine to support his additional weight, and a complicated miniaturized CPU in his brain. [Deadpool: The Circle Chase #3]

While with Weapon X, Garrison worked with other agents who had undergone different enhancement procedures, including Deadpool, Sluggo and Slayback. The others all died or went rogue, however, leaving Kane as the sole success for the second program. He became an active field agent under the codename of Weapon X, serving at the discretion of General Jeremy Clarke. Kane operated out of the Canadian government's covert agency in Newfoundland, Department K, which may have been named for their primary operative. While Department H was the ministry's public face, supporting super-heroes like Alpha Flight, K was more of a black ops unit whose existence was unknown to the public or even to Alpha Flight and other Department H agents. 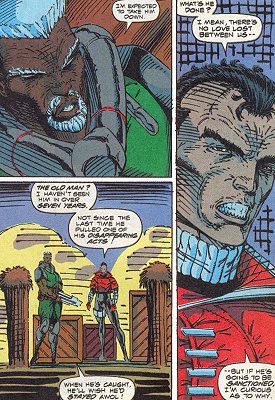 Nearly seven years after the Six Pack's last mission, Weapon X was approached by his old comrade G.W. Bridge, who was now a commander in the international peace-keeping agency known as S.H.I.E.L.D. Bridge informed him that Cable was wanted for questioning after a terrorist bombing in Manhattan, and he was charged with bringing him in. Bridge offered Kane the chance to get involved in the hunt but Kane turning him down, preferring to leave his history with Cable in the past. [X-Force (1st series) #2]

Things changed after Weapon X went on a routine smuggling bust in Vancouver and ended up running into the Mutant Liberation Front. While pursuing the MLF members back through Zero's teleportation portal, Kane ended up face-to-face with Stryfe, who taunted him by removing his helmet and confronting Kane with the mirror image of Cable underneath. This encounter spurred Kane into action. After Stryfe rendered him unconscious and dropped him off back at Department K's doorstep (presumably because he knew the ramification his revelation would have for Cable), Kane contacted G.W. at S.H.I.E.L.D. and accepted his offer, combining S.H.I.E.L.D. and Department K resources in the mission to bring down Cable. [X-Force (1st series) #7, 9-10]

To aid them against Cable and his new team, X-Force, Kane and Bridge assembled a group of operatives known as Weapon: Prime. Tracing X-Force to their base in the Adirondack Mountains, Weapon: Prime engaged them in battle in an attempt  to apprehend Cable. Kane defeated Shatterstar in single combat, but not before the X-Forcer cleaved off one of his arms. The battle ended when their 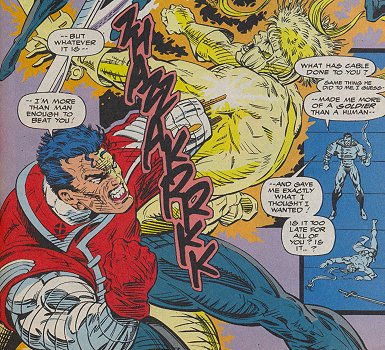 former employer, Tolliver, overrode Cable's personal voice commands and triggered a series of explosions at the base, inadvertently allowing Cable to escape capture. Kane and Bridge were both injured further in the chaos, and were unable to prevent X-Force from overpowering the S.H.I.E.L.D. crew on site and stealing their Interdiction Personnel Assault Carrier. [X-Force (1st series) #11-14]

Returning to Department K empty-handed, Weapon X recuperated and was rebuilt with new and more powerful bionic components. G.W. Bridge paid him a visit shortly thereafter with a security video showing Cable clashing with the Mutant Liberation Front.  Still believing Cable and Stryfe to be the same man, Kane began investigating the matter again to get some answers. He contacted Hammer in order to get an old 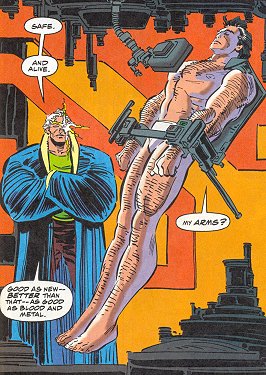 list of possible safehouses Cable held, and finally tracked him to a chalet in Switzerland. Their fight led down the side of a mountain cliff, with Kane hanging off of it. He finally revealed to Cable what he had learned months ago about Stryfe's face, and the two managed to settle down enough to talk. After an exchange of information, Weapon X agreed to help Cable unravel the mystery being the MLF's recent string of thefts of ancient artifacts, and in exchange Cable would try to find some technology in his future to repair Hammer's spine. They tracked Stryfe and the MLF to the Yucatan Jungles of Mexico, only to be caught in a trap. Once again, Cable was forced to choose between Kane's life and Stryfe's interest in information he held, but this time he chose Kane's safety and suffered Stryfe's rage because of it. Kane struck back to save Cable's life, overloading Stryfe with an electromagnetic feedback channeled through his bionic arms, destroying them in the process. Cable grabbed Kane and fled into the future to get him medical treatment. Kane was repaired, better than ever, using 40th century liquid metal, and Cable also promised to find something to fix Hammer as well. [Cable: Blood & Metal #1-2]