Before Cable could fulfill that promise, however, he was called back to the present day when Stryfe attempted to assassinate Professor X sans helmet, thereby appearing to be Cable. With 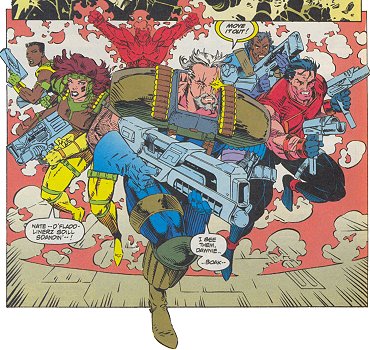 Nathan and his time-travel equipment gone, Kane was left stranded in the future.  Hooking up with the remnants of the Clan Chosen, Cable's old revolutionary group, Garrison spent a full year waiting for Nate to return for him. Most of that time, Garrison researched Cable's past in order to get a better feel for the man. When Cable eventually did return, he led Kane and the Clan Chosen on a dual mission to capture the New Canaanites new time displacement nexus, sending Kane and Cable back to the present before destroying the nexus to prevent the Canaanites from using it themselves. [Cable (1st series) #1-2] 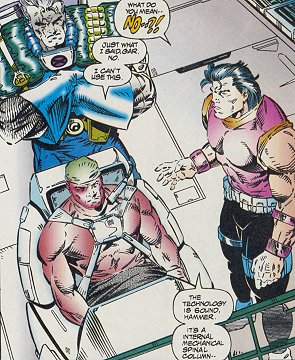 Once back in the present, Kane and Cable ran into Bridge and the remaining members of Six Pack, who had also been searching for Cable. While Kane had found a cybernetic treatment program for Hammer to use, Hammer's hatred of Cable led him to refuse the offer, not wanting to become at all like Cable. There was too much bad blood between Cable and most of the others for them to continue working together. As he was going to reunite with X-Force, Cable offered Kane to come along, but Garrison preferred to set off with the others set off to rebuild the Six Pack as a working mercenary outfit. [Cable (1st series) #3-4]

As their sixth member, Kane wanted to recruit Deadpool's old girlfriend Vanessa Carlysle, aka Copycat, who had recently worked with Domino and Grizzly before running off on her own. Kane tracked Deadpool to Sarajevo, looking for a lead on Vanessa, only to get caught up in the hunt for Tolliver's legacy. Because of their shared past in 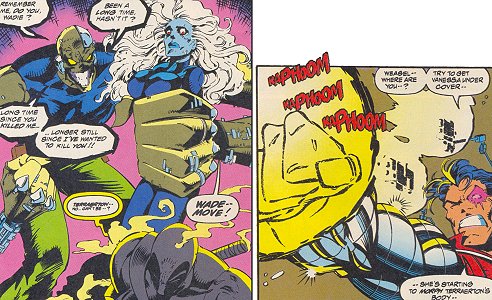 the Weapon X program, there was an enmity between the two men, but with Slayback coming after them and Vanessa, they were forced to work together, especially after Copycat was injured during the final battle with Slayback over the treasure left behind by Tolliver. When Copycat revealed that she didn’t love him anymore, Deadpool let Kane take her off to get medical treatment. [Deadpool: The Circle Chase #1-4]

While Vanessa did not accept Kane‘s offer to work with the Six Pack, probably because she needed some time to fully recover,  Kane continued to run missions with the group for a few 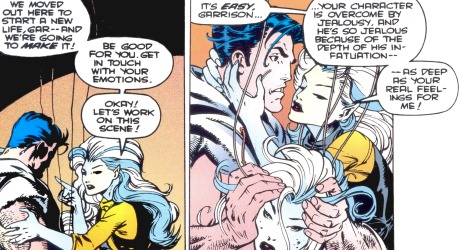 months before they disbanded and went their separate ways. Around that time, Kane and Vanessa discovered their feelings for each other, and they decided to retire from the mercenary life. They settled into a quiet routine in San Francisco where they worked at a local stage theatre. Despite an explosive visit by Deadpool, they lived a peaceful life there. [Wolverine (2nd series) #88]

Following the Onslaught debacle, the flames of mutant hatred were fanned significantly by the loss of Earth's mightiest and most popular heroes. The Psycho-Man was more than willing to make use of this and, employing his emotion-manipulating devices, he magnified every fear, doubt, or hatred among the populace until they turned against themselves.  During the riots, an angry mob destroyed Kane's and Vanessa’s home. Having recognized the psionic nature of the 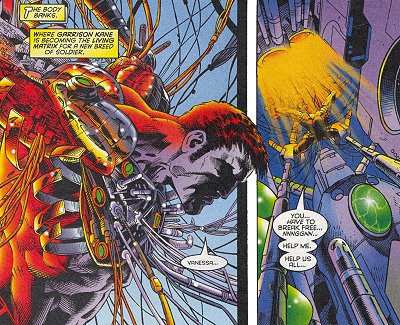 city's madness, Kane contacted Cable and Domino for help. The Psycho-Man confronted Kane and his allies, and attempted to kidnap Garrison in order to pilfer the bio-technology from his body for his own uses. Thanks to Vanessa's morphing powers, however, Psycho-Man ended up returning to the Microverse with her as his captive instead of Kane. The group managed to travel to the Microverse with the help of Arcturus Rann and his Micronauts, but trying to rescue his lover, Kane ended up captured as well. Before the Psycho-Man could finish his plan to turn Kane into a living matrix for his new breed of techno-organic soldiers, though, he was defeated by the other heroes. [Cable (1st series) #37-39] Once back on Earth, Garrison and Vanessa packed their belongings and hit the road to find another place where they would fit in and be accepted.

It can only be assumed why Garrison and Vanessa did not find themselves a new home; possibly they remained bitter over their experiences with bigotry in San Francisco. At some point, they were tracked down by agents of the revamped Weapon X Program, hunting down mutants for the insane Director as part of a joint American-Canadian black ops organization. Him having been the prime operative of the project’s last incarnation, they tried to recruit Garrison back into the fold, and they also offered to stabilize the somewhat random and involuntary nature of Copycat’s shape-shifting. [Deadpool (2nd series) #58, Weapon X - The Draft: Agent Zero]

In what was apparently one of his first assignments for Weapon X, Kane was overseeing an A.I.M. research venture in the Canadian wilderness when agents of Department H came looking for him. This led into a confrontation with Alpha Flight and Wolverine, during which the A.I.M. installation was eventually destroyed. [Wolverine (2nd series) #142-143]

Back at the Weapon X compound, Kane began undergoing a series of unnecessary surgeries to enhance his synth-org bionics, due to a deep-rooted inferiority complex he had developed living in the shadow of  Cable, Bridge, Wolverine... even Deadpool. Things became even worse for Kane 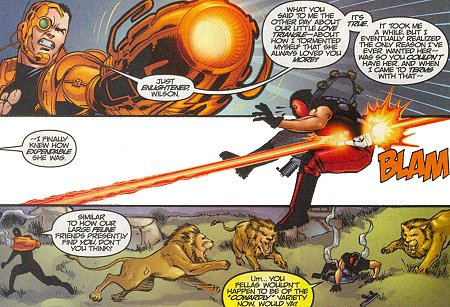 psychologically when Vanessa didn’t return from an extended undercover assignment, using her shape-changing powers to keep tabs on Deadpool, whom the program was also trying to recruit back into the fold. Halfway through the mission, Copycat went AWOL and abandoned the Weapon X program, trying to re-connect with her former lover instead. Apparently, Kane wasn’t bothered too much about her departure, though, as he realized that he had not truly loved her but only wanted to make sure that Deadpool couldn’t have her. 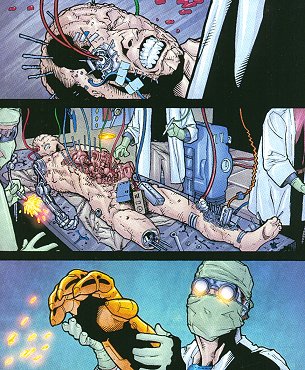 After that, Kane resigned himself to being an unthinking soldier in the Director's employ, regardless of the consequences or ramifications of their work. He thought nothing of murdering children or trying to assassinate Vanessa after the Program found her and ordered her execution (though in the end it was Sabretooth who actually murdered Copycat). [Deadpool (2nd series) #57-59]