The Weapon X Program began to expand its influence, and even started rounding up civilian and combatant mutants alike in the middle of the night, shipping them off to Neverland, a secret 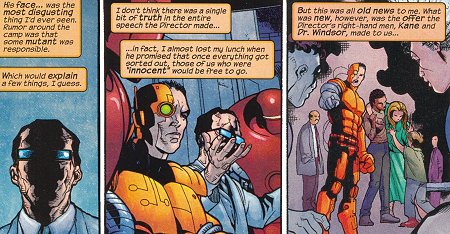 concentration camp for mutants to be contained and experimented on. As a non-mutant and high ranking agent, Kane was the only member of the Weapon X team who accompanied the Director to Neverland, and knew what it truly was. [Weapon X (2nd series) #5]

Despite their attempts to remain under the radar of mutant teams like the X-Men, however, Weapon X and the Neverland facility came to the attention of Kane's old mercenary comrades, Cable and Domino, who established their own network of  agents and informants called the Underground, to gather data on Weapon X and their activities. Cable was more than shocked to 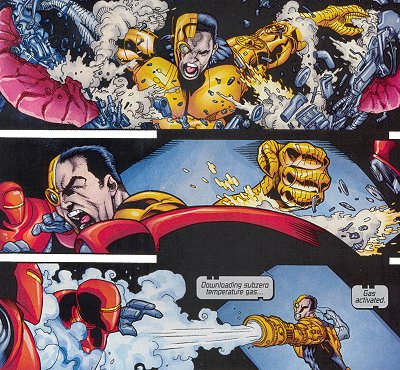 find in the research that his friend Garrison was part of the other side. Meanwhile, Kane continued to retreat into technology: after his last round of personal upgrades - adding to his bionics the ability to download an approximation of any number of special powers from an internal database - he began to interact more with the autonomic Boxbot droids rather than his fellow human beings. Perhaps he felt that dehumanizing himself literally was the only way to continue doing the work asked of him by the Program. [Weapon X (2nd series) #7-9]

Despite his emotionless exterior, though, Kane still held regrets about his actions which were brought to the surface by Mesmero of all people. Despite his personal distaste for the arrogant hypnotist, when Mesmero lost his powers and was sentenced to the Neverland facility, Kane's emotional armor cracked at the thought of giving a fellow teammate such a death sentence; he even tried to offer some vain reassurances before seeing Mesmero off. [Weapon X (2nd series) #11]

Immediately thereafter, Cable and his Underground stormed the Weapon X program, and Kane found himself face-to-face with his old leader and friend for the first time in months. He made a feeble attempt to defend his actions, but Cable's outright rejection was the cold bucket of water Garrison needed to overcome his insecurities. Finding the Underground facing a horde of Boxbots, Kane activated the one power in his circuitry's database which was suicide to use:

technomorphing. Because of his own bionic parts, the energies used in technomorphing matter would not properly conduct through his cyborg exterior, causing his mechanical portions to overwhelm and destroy what remained of his humanity. By attracting the various components making up the Boxbots to himself, Kane disassembled the entire opposition force... dying a hero at the last moment. [Weapon X (2nd series) #12]

[Note: Many years later, Kane appeared in Deadpool: Bad Blood, where he was running Project: Daedalus for Department H. This graphic novel was highly ambiguous regarding its time period, and seemed to violate continuity however you look at it. Absent other evidence, though, it is best treated as a previously-unseen encounter between Deadpool and Kane before his death, and not the resurrection of Kane.]