Excalibur,
member of the royal house
of Ee'Rath on Earth-148

• Carries the mystical blades of Zz'ria, able
to slice through anything except those who
are pure of heart

Kylun was born under the given name Colin McKay. By all appearances, he was an average, curly-haired, freckled, Scottish kid. He was, however, a mutant. By the time he was seven years-old, his pupils had turned into vertical slits, much like those of a cat. This attracted 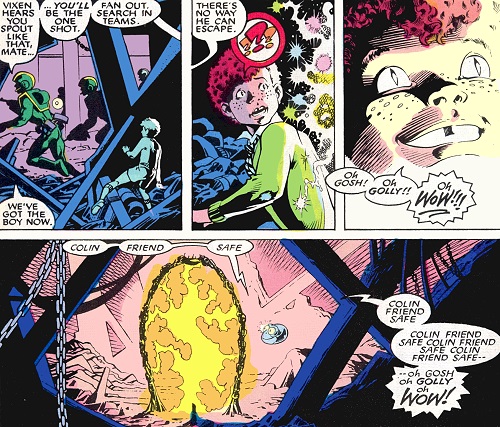 unwanted attention from some very bad people and Colin was abducted by a group headed by the crimelord Vixen. Still, Colin managed to escape shortly thereafter and found temporary refuge in a derelict warehouse belonging to Gateway Technologies. It was there that he befriended the technological construct, Widget. When the kidnappers finally caught up to him, Colin’s new friend constructed a portal for him to escape through. Colin gleefully stepped through without hesitation. [Excalibur (1st series) #2]

Widget’s portal not only brought Colin to safety, but took him to an entirely different reality, that of Earth-148. In this reality, the planet was called Ee’Rath. Colin emerged on the ice planes and his arrival was considered a good omen by the local population. He was taken to the exiled royal household, where their leader, the queen Ai’Sha, put him in the care of her counsellor, the mystic ZZ’ria. It was decided that Colin was to be trained as a warrior. 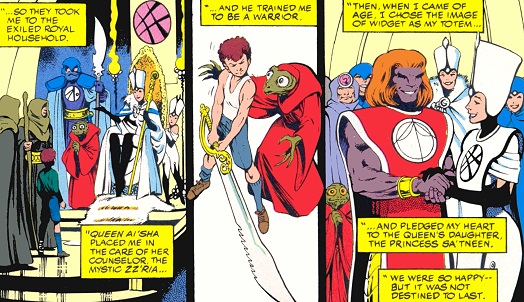 Time moved faster on Ee’Rath and, as Colin grew older, his mutation also advanced. What started with his cat-like pupils spread to become feline facial features with fur covering the entirety of his body. When he came of age, he chose the totem of Widget and pledged his love to the sorceress, Princess Sa’tneen. Also at some point, he started going by the name Kylun. It may have been due to this reality’s dialect and their best pronunciation of “Colin.”

The tyrant of this world, the uber-powerful sorcerer Necrom, was fearful of the exiled queen Ai’Sha and her growing army. He launched a savage attack on their settlement, resulting in the deaths of Queen Ai’Sha, ZZ’ria and thousands of others. Hundreds more, including Sa’Tneen, were captured. Kylun was badly wounded and left for dead, but he recovered and began to rally a new army of oppressed people. [Excalibur (1st series) #46]

Once Kylun’s militia was large enough, they took on a convoy of druids and their captive, Sa’tneen. As she was the last of the sorceress sisterhood, she was being taken to Necrom for a blood sacrifice. Kylun and his new army were successful and freed the princess, who warned them that Necrom was going to attempt a deadly ritual and the whole Multiverse might be in trouble. It 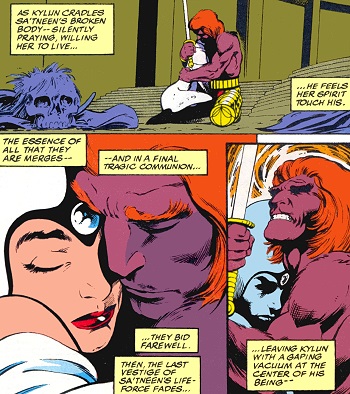 took some time, but Kylun and his forces finally made their way to the Dark Citadel, Necrom’s base of power. Taking the lead, Kylun and Sa’tneen were led into a trap and cut off from their army. Face to face with the despicable despot, Necrom revealed his plot to rule the Multiverse, before he attacked them with the deceased, reanimated members of that world’s Excalibur. [Excalibur (1st series) #42-45]

Sa’tneen took the battle to Necrom, who proved too powerful. After seeing his lover murdered, Kylun flew into a rage and tossed one of his mystical swords at Necrom. He connected and Necrom was skewered. While Kylun was distracted, tending to Sa’tneen’s body, a slave creature helped the wounded Necrom to the door of the Tower that Crosses Time. Kylun, intent on finishing the job, gave chase and burst through the door mere moments after Necrom and ended up flying into Excalibur’s Lighthouse bathroom, where Nightcrawler was brushing his teeth.

Sizing up Kurt in an instant, Kylun recalled the omen that led to Sa’tneen’s mother, Aisha, being dethroned by Necrom. A blue demon emerged from the Tower that Crosses Time, cursed an alien curse, and then vanished in a burst of flaming brimstone. Believing Nightcrawler to be that demon, 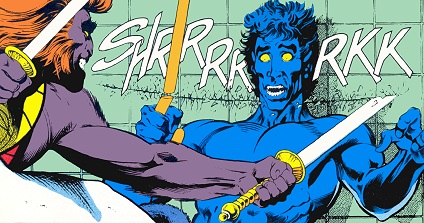 Kylun attacked him without hesitation and decapitated him, or it would have seemed, as the blade passed harmlessly through his neck. Kylun’s blades, forged by Zz’ria, were made so they would not harm someone of true virtue and pure spirit. This alone was enough to give Kylun pause. After Widget entered the bathroom, Kylun realized he was back home and filled Nightcrawler in on his origin.

Though Kylun had leapt through the door only a few seconds after Necrom, Nightcrawler explained to him that Necrom had shown up more than a month prior, and also told Kylun that only one year had passed since he had initially stepped through Widget’s warpgate. Kylun, intent on finding and defeating Necrom, decided to ally himself with Excalibur. [Excalibur (1st series) #46] 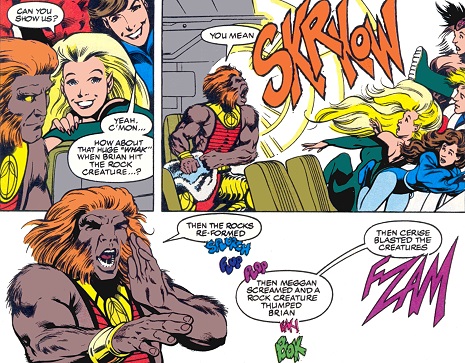 Kylun’s first mission with Britain’s mutant superhero team came following a distress call from a monastery in Ireland, where the Anti-Phoenix had been buried. During a battle with the Anti-Phoenix, Kylun’s mystic swords proved invaluable as they easily slew demonic creatures made of rock and mud. On the plane ride back to the Lighthouse following their victory, Kylun's new teammates were impressed by his skills and curious what his mutant power was. A slightly embarrassed Kylun displayed his sound mimicry for the first time by imitating the sounds of their fight with the rock creatures. [Excalibur (1st series) #48]

Kylun’s chance for a re-match with Necrom came sooner than expected, as the powerful sorcerer made it known he was on his way to battle Excalibur. To buy their teammates precious time to repair the Otherworldy energy matrix that connected all realities of the multiverse, Kylun and Feron face Necrom all by themselves. The battle soon commenced and both neo-Excaliburians looked to be on the losing side. The timely arrival of governmental agent Micromax, who leapt from a helicopter and crashed into Necrom, probably saved them. Once Necrom recovered, Kylun lunged toward him for the fatal blow, but the evil wizard retreated into Excalibur’s lighthouse as he was after the power of Phoenix.

Kylun chased after Necrom but found Sa’tneen waiting for him inside the lighthouse instead. She claimed that she had used her mystic prowess to restore herself to life. Kylun pretended to be fooled by her reanimated corpse, but only to draw out Necrom, who tried to sneak up on him. He realized that Necrom’s power must be waning for him to use such a ploy. Indeed, the sorcerer 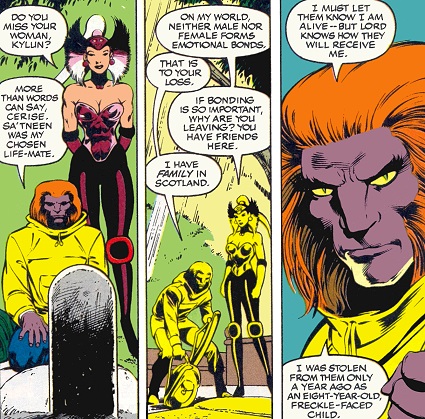 could no longer afford to let himself held back and he teleported away to Otherworld out of Kylun’s reach. Robbed of his revenge for a second time, a tearful Kylun knelt to the ground and cradled Sa’tneen’s lifeless body. That Necrom died during his confrontation with Phoenix provided him only little comfort. [Excalibur (1st series) #49-50]

After the incident, Excalibur took up new residence in Braddock Manor and Kylun was invited to stay as long as needed. Brian Braddock even allowed Kylun to bury Sa’tneen in the Braddock family grave, a beautiful serene spot on the estate. Not much later, though, Kylun decided to take a leave of absence from Excalibur in order to track down his parents and let them know he was alive. [Excalibur (1st series) #51, 55]

It took him several days to reach his parents’ home but, when he finally arrived, Kylun was hesitant. He recalled how the Vixen had told him his parents were dead and wondered what lies she had presented them, and how they would react to him being all grown while for them only a year had passed. Just before he could push the doorbell, Kylun was yanked through the air by a trio of Warpies, super-powered children in the service of a British covert organisation, the Resources Control Executive (R.C.X). Though outnumbered, Kylun fought his assailants, but was distracted when his mystic sword passed harmlessly through one of his foe’s forearms. After all, the Warpies were just misguided innocent children. 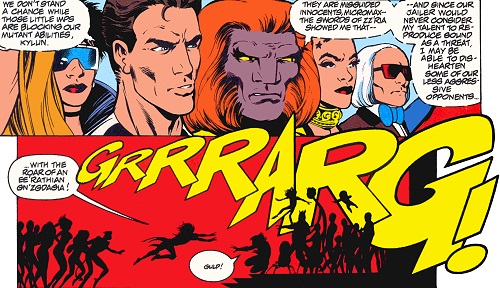 A powerful knock to the back of the head put him down for the count and Kylun was taken to Cloud Nine, an R.C.X. facility, and put into stasis alongside several other members of Excalibur.  Nightcrawler eventually discovered and freed them, and a huge battle involving dozens of super-powered children ensued, some of them having abilities that negated the powers of Kylun’s teammates. Kylun scared off the young power dampeners by imitating the roar of an Ee’Rathian gn’zgdasia and the tide turned in their favour. The battle ended with the exposure of the deceitful leader of the R.C.X. [Excalibur (1st series) #63-65]

Before Kylun could even think of returning to his parents’ house, he got caught up in more missions with Excalibur. During one of them, his vocal powers came in particularly handy, as his mimicry of a Sentinels’ voice granted the team access to the main base of the mutant hunting robots. [Excalibur (1st series) #67] When Nightcrawler’s lover, Cerise, faced criminal charges in her native Shi’ar empire, Kylun was more than ready to battle for the woman his friend loved. Apparently, the whole mission brought up memories of Sa’tneen and how he couldn’t save her. However, Nightcrawler decided not to fight and let her go, as Cerise said she wanted to atone for her mistakes. [Excalibur (1st series) #70] 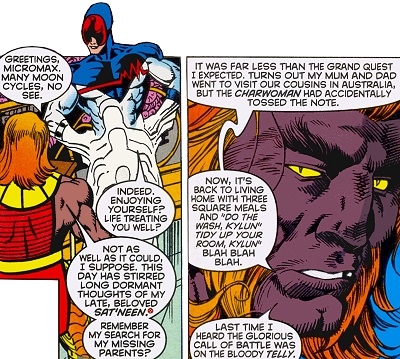 Afterwards, Kylun once again went looking for his parents. [Excalibur (1st series) #71] They had apparently gone missing, but were merely visiting cousins in Australia. It was only many months later, during the wedding of Captain Britain and Meggan, that Kylun met his friends from Excalibur again. At one point during the party, he and Micromax lamented over their glory days and talked about their current life. Ever since his familial reunion, Kylun had been tasked with household chores, much to his chagrin. [Excalibur (1st series) #125]

Kylun adjusted well to life out of the spotlight, and largely gave up on adventuring. He was seen once on Madripoor when Mystique made that island nation a mutant-friendy country. That particular timeline was altered by Eve Bell in both obvious and subtle ways, however, leaving it uncertain whether Kylun ever visited Madripoor in the current timeline. [Uncanny X-Men (3rd series) #23] Kylun resurfaced at Mindfulness for Mutant Appearances, a support group formed by Nightcrawler and Domino for 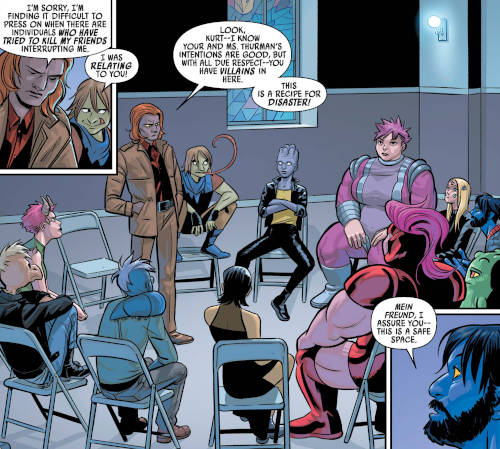 mutants who could not pass for "normal people." At MMA, Kylun initially had trouble expressing himself in a group of both heroes and villains coming together for a common cause. Still, the group meeting ended on a high note, as they all reaffirmed their dedication to being their best selves, whatever that may look like. [Domino Annual #1]

Weeks later, Kylun and Meggan were summoned by Jean Grey among a massive collection of X-Men reserves to deal with the super-powerful rogue mutant, Nathaniel Grey the X-Man. The battle grew in scope as X-Man merged with Legion, a second Omega-class mutant, to oppose the united X-Men. Kylun and the X-Men overcame Nathaniel Grey's Horsemen of Salvation and turned on the X-Man himself. Nate defeated the X-Men by reincarnating them all into a pocket reality, one with a world totally at peace with mutantkind. [Uncanny X-Men (5th series) #9-10] In this world, Colin remained associated with Nightcrawler and Meggan, serving as on-set personal trainer as they became famous in the movies. Grey's idyllic world had a rotten core, however, and the X-Men eventually uncovered his manipulations and returned to their home reality. [Age of X-Man: Amazing Nightcrawler #1-5]