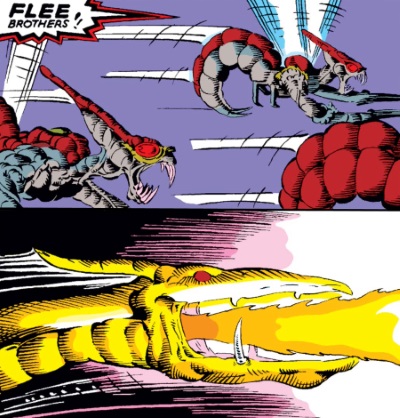 While the creature called Lockheed may look like a small purple dragon, he is actually a member of the alien race known as the Flock. Born into the community-driven society over 170 years ago, Lockheed became a soldier and was drafted into the war between the Flock and the deadly Brood. Lockheed proved to be a great warrior and managed to reduce the Brood’s numbers until they were almost wiped out. He was also engaged to be married to the daughter of one of his race’s leaders but, on the day of the wedding, he did not show up. Whilst in the catacombs beneath the surface of the Brood’s home planet, slaying hordes of the parasitic creature, his attention was suddenly caught by a creature of another kind. Curious as to what it was, he followed it. The creature, a human called Kitty Pryde, was being hunted by the Brood, so the heroic warrior decided to help the young girl out. Killing the Brood and earning her admiration, he covertly followed her when she met up with her team, the X-Men. With the Brood world about to explode, Lockheed secretly hitched a ride on the X-Men’s spaceship. [Excalibur (1st series) #40, Uncanny X-Men (1st series) #166]

Lockheed arrived on a strange, new planet full of humans but was most transfixed by Kitty and he continued to watch over her without her knowing. He struggled to adjust to the new climate and the fact that food wasn’t as bountiful as it had been when he was hunting Brood. He eventually revealed himself to Kitty when she phased into the tunnels beneath the X-Mansion and found him lurking in the darkness. It was at this moment that they were suddenly attacked by Sidri hunters, aliens who had attacked the mansion a few months earlier. Kitty and Lockheed proved to be an admirable team and together they managed to defeat the aliens, which also had the added benefit of providing some food for the hungry Lockheed. 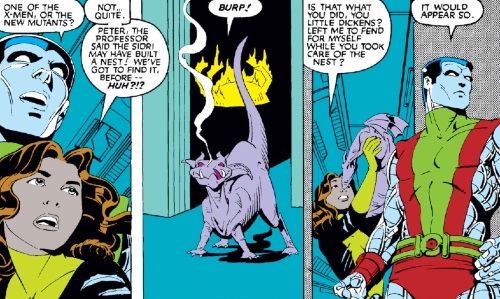 Afterwards, Lockheed officially met the rest of the team and, believing that his home world had been destroyed, the X-Men decided to let him stay with them. Professor X tried to scan Lockheed’s mind and he could see that he was intelligent but ultimately found the dragon's mind too alien to be read. Lockheed chose not to reveal the true extent of his intelligence, instead he was more than happy to let the X-Men treat him as a pet. [Uncanny X-Men (1st series) #168]

[Note: As Kitty did not know the real name for her new pet dragon, she chose the name Lockheed. Whilst there was never any on-panel explanation for the name it was obviously based upon the famous aerospace company, the Lockheed Corporation (it would later become Lockheed Martin). During the 1960's the company even built an aircraft called the Lockheed SR-71 Blackbird, which was the likely design basis for the X-Men's own Blackbird jet]

Lockheed and Kitty quickly formed an empathic bond and the two became inseparable. Whilst many of the others saw him as Kitty’s pet, she regarded him as more of a friend. He even became jealous when she developed a crush on her fellow teammate Colossus. [Uncanny X-Men (1st series) #174]

A few weeks later, Lockheed, along with a number of other heroes and villains on Earth, was transported to a mysterious planet called Battleworld by the entity known as the Beyonder. Whilst the humans were more concerned with fighting each other and figuring out how to get back home, 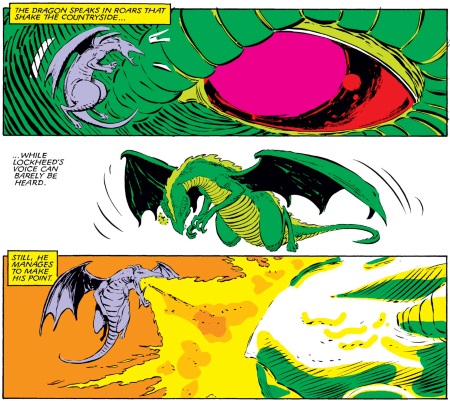 Lockheed decided to have a little more fun instead. He managed to find a friend on Battleworld when he met a small dragon who was native to the planet. The other dragon tagged along when Lockheed and the heroes were teleported back home but, when they materialized on Earth, the little dragon had become enormous. Confused by the changes, the now massive dragon flew off across Japan and caused quite a stir amongst the locals. Despite the fact he was now tiny compared to her, Lockheed managed to stop her rampage when he made it clear the love she felt for him wasn’t reciprocated. Heartbroken, the dragon flew off and Lockheed chased after her but they both vanished before the Japanese could fire their weapons at them. Lockheed reappeared once again with the X-Men but without his friend. [Secret Wars I crossover, Uncanny X-Men (1st series) #181] 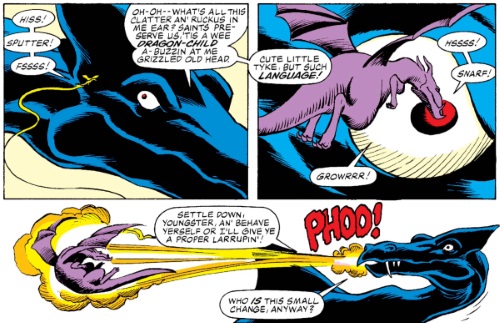 One day when some of the X-men were in the Danger Room, a strange portal opened up and a tentacle dragged Lockheed through to the other side. Nightcrawler teleported in after him before the portal closed and the two were trapped on the other side. Lockheed and Nightcrawler found themselves on a pirate ship and they quickly joined the crew as they tried to figure out a way home. The pair soon ran afoul of a sorcerer named Shagreen, who wanted to study Nightcrawler's teleportation power. Lockheed ended up teaming with some strange creatures called Bamfs (which seemed to be miniature, elf-like Nightcrawlers), as well as a giant, full-sized dragon, in a bid to stop Shagreen and return home. [Nightcrawler (1st series) #1-4]

Lockheed remained on the team and often went with them on missions, although he normally stuck very close to Kitty whenever possible. When Kitty wasn’t around, he tended to stay with Illyana Rasputin, with whom Kitty had become close friends. When Kitty was severely injured during the Mutant Massacre, Lockheed could only look on helplessly as she remained stuck in her phased state. [Uncanny X-Men (1st series) #189, 192, 210-211, 213, New Mutants (1st series) #18, 21] 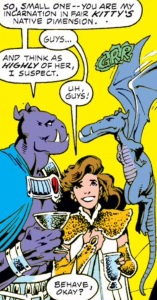 When Kitty joined the British team Excalibur, Lockheed joined her and was soon dragged into their crazy adventures. As well as fighting the Technet, the Crazy Gang and Warwolves, he also ended up bouncing from reality to reality in their cross-time caper. Along the way, he was shocked to discover that the train the team was using to travel between worlds was powered by a giant, alternate version of himself. He received even more of a surprise upon meeting a humanoid version of himself, who was also a proud warrior of his race. [Excalibur (1st series) #1-24]

During his time on the team, Lockheed bonded with another strange entity called Widget, who looked like a small robotic ball that could fly. With a child-like mind, Widget proved to be a great friend to Lockheed and the two would often play together. When Excalibur was infiltrated by the powerful illusionist Mastermind, Lockheed and Widget tried to warn the team about the danger, as they could see through his disguise. [Excalibur (1st series) #25-26] 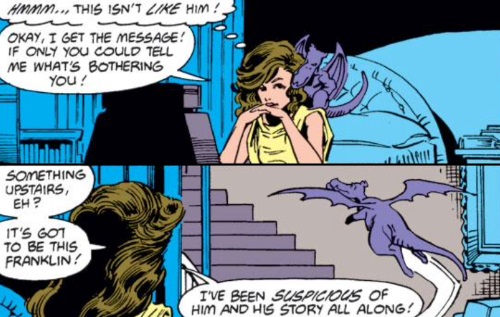 When Doctor Doom visited Excalibur looking for help, the team should have known better than to trust the villainous dictator. Nevertheless, they helped him out and, when he inevitably betrayed them, Lockheed was severely injured in the subsequent fight. Kitty took him to one of the best surgeons in Britain but even they were at a loss to properly treat the alien. After hours of surgery, 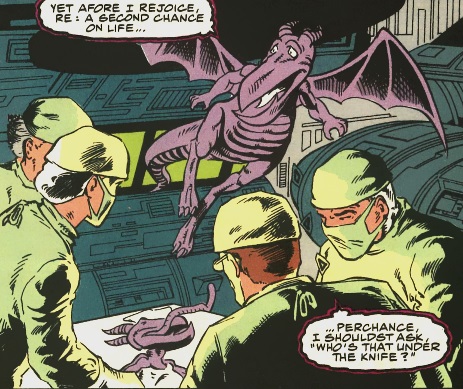 Lockheed was still in critical condition, so much so that his astral spirit separated from his body. As his physical form lay in a coma, Lockheed’s confused spirit floated around his worried teammates. He suddenly felt a pull and was completely helpless as he began floating up into the sky towards a large spaceship. Taken aboard the ship, he discovered it was piloted by the astral forms of other members of his race. They had been searching for him ever since he had left with the X-Men years ago.

Without so much as a hello, Lockheed was put on trial for abandoning his race and his fiancé. With the penalty of death looming over his head, Lockheed was forced to defend himself and explain his actions. Thinking fast, he told the court all about his Excalibur teammates and his heroic actions with the team, but the prosecutor was not impressed at all. The trial went on so long that the Flock who were piloting the ship fell asleep and the spacecraft began drifting dangerously out of control towards Earth’s atmosphere. Knowing that everyone aboard would die if the ship crashed, Lockheed abandoned the trial to steer the ship clear of danger. After saving everyone on board, Lockheed returned to the court to continue arguing his case, but the judge had seen enough. Lockheed was found guilty of abandoning his race but, thanks to his heroic actions in saving the ship, he was exiled from the Flock instead of being executed. Lockheed’s astral form drifted back to Earth and into his still critically injured body again. [Excalibur (1st series) #37, 39-40]

Lockheed soon recovered and rejoined the team on their missions once more. Excalibur’s roster changed a lot over the next few months and one of the new joiners was a man named Peter Wisdom. He took an instant liking to Kitty and the two soon entered into a relationship, something

that Lockheed did not approve of. Lockheed decided to try and drive a wedge between the two lovers by tormenting Wisdom at every available opportunity. From hiding his cigarettes to hanging his clothing from the top of Excalibur’s base, Lockheed became a thorn in Wisdom’s side. He even spoke English to Wisdom, something that he had never done with anyone else, and told him outright that he hated him. Wisdom reported this back to Kitty, but she instantly sided with Lockheed, not believing her trusted friend would be so devious. [Excalibur (1st series) #96-97, 100]

When Kitty left Excalibur for a while, the rest of the team assumed Lockheed had gone with her, but in fact he had been kidnapped and held in the tunnels under their Muir Island base. His captors, a group of Bamfs like the ones he encountered with Nightcrawler a while back, seemingly despised Lockheed because he 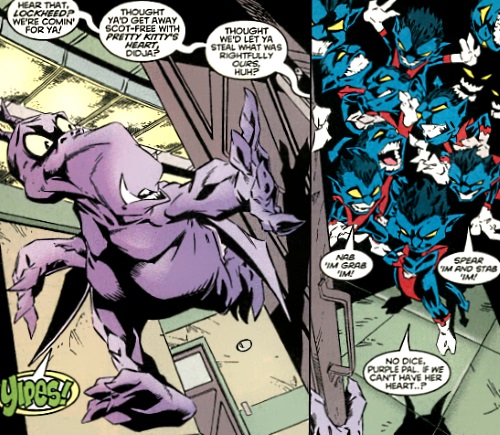 was Kitty’s best friend. Kitty had created the Bamfs in a story some years before, but they had somehow been brought to life. Forgotten about by Kitty, the Bamfs directed their growing anger to Lockheed, whom they saw as their replacement. He eventually managed to escape from them and foolishly thought that they would leave when they got bored. Sadly he was wrong and the dastardly creatures overran Muir Island and captured Lockheed. The Bamfs weren’t working alone though and their master, the demonic Nightmare, soon appeared. Trapping Excalibur in their own personal nightmares, the team were at his mercy. It was Wisdom who managed to break free from Nightmare’s twisted dreams and his first act was to break Lockheed from his shackles. Together the duo managed to free the rest of Excalibur and put an end to Nightmare’s schemes. Afterwards, Kitty was proud of Lockheed for setting them free but he reluctantly indicated that it had been Wisdom who had been the real hero. [Excalibur (1st series) #113-114, 117-119]

Even though he had softened up slightly towards Wisdom, Lockheed couldn’t have been happier when Kitty broke off her relationship with him. Lockheed’s antics were just one of the many problems the two had endured, and the appearance of Kitty’s former boyfriend Colossus didn’t help. Lockheed had always preferred Colossus and so, at the wedding of Captain Britain and Meggan, he orchestrated it so that Kitty with catch the bouquet and Colossus the garter. However, despite his best efforts, the two former lovers didn’t reconnect. Soon after, Excalibur disbanded and Kitty, along with Lockheed, Colossus and Nightcrawler, decided to travel back to America to rejoin the X-Men. [Excalibur (1st series) #120, 125] 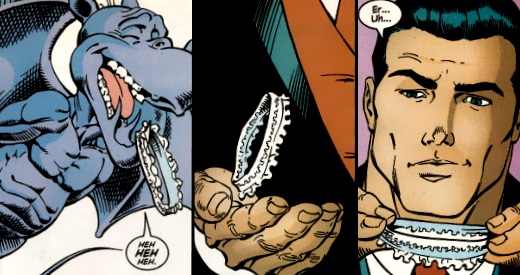