Monet’s counterpart from the Age of Apocalypse was nicknamed “Claudia,” apparently a pun based on the famous painter, Claude Monet. Whereas all of her siblings were members of Sinister’s Mutant Elite Force, and as such supporters of Apocalypse’s rule, she was at one point recruited by the X-Men for their training team, Generation Next. 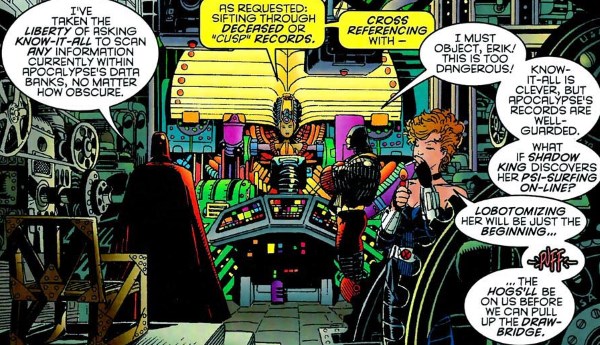 As most other people with mental powers were either dead or working for Apocalypse, this aspect of her abilities was considered far more valuable than her physical powers. In fact, Claudia eventually gave up her mobility to be cybernetically linked to a huge machine that amplified her ability to process and analyze data. Now referred to as Know-It-All, she maintained contact with her teammates and guided them from afar, providing whatever information or strategic analysis they required. 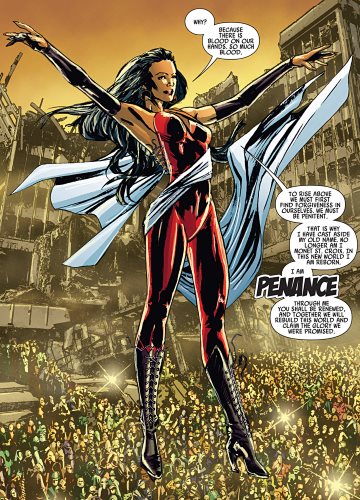 When Weapon X was corrupted by some Celestial technology, he became Weapon Omega, ushering in a new, dark chapter in the world’s history. He started wiping out every human colony he could find and, after a few years, only a few scattered pockets of humanity remained. A resistance group was formed and they began targeting Weapon Omega’s forces, which included the Dark Beast and Sugar Man. The two villains were using a Celestial Life Seed to resurrect dead mutants and brainwash them into servant for Omega. Prophet, one of the resistance, managed to destroy their base, but not before secretly resurrecting Monet for his own plans. Seeing her as a symbol that the remaining humans and mutants could get behind, he dubbed her Lady Penance and she soon became a serious opposition to Weapon Omega’s rule.

Born approximately 60-80 years ahead in the alternate X.S.E. future timeline, the X-Man Bishop eventually made his way to the present.  For some reason, his grandmother was forced to hide 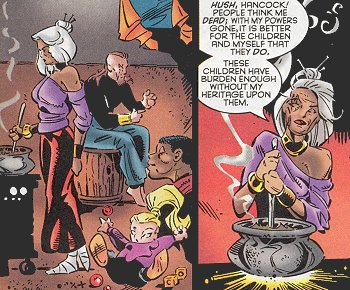 her true identity that was only hinted at but never fully established. An elderly black female, she was no longer able to use her mutant powers. Additionally, she was mentioned to have known the legendary X-Men on a personal basis, and while raising young Bishop she often reminded him to protect his sister. Her exact words were “Family should protect Family. We have not always done that well in our family.” That would certainly match with M’s relationship to her brother Emplate. The grandmother being Monet and as such being related to the creator of the Emplates, one of the greatest plagues of the era, would also provide a reason for why she was forced to hide her identity. Additionally, in a moment of blurry vision, Bishop once noted that Monet resembled his mother.

Ten to fifteen years in the future, Monet was a member of the X.S.E., trying to hunt down one of their defected members, Sage. Simultaneously, the X-Men found themselves under attack by various opponents of theirs who had banded together. Monet joined a small taskforce going after Mr. Sinister, one of the culprits, but they found themselves facing Sinister’s minions instead. One of them, a woman named Shakti, magically transformed Monet into Penance once more, but it

was a pyrrhic victory. In deep shock and catatonic, Monet was used by Rachel Summers as a weapon, telekinetically hurling her at Shakti, and Penance’s razor-sharp skin doing the rest. Reverting back to her true self, Monet joined the surviving X-Men when they departed to space to take the battle to Cassandra Nova, the mastermind behind all the attacks. While in the End the heroes emerged victorious, it is unknown whether Monet survived that final conflict or not. 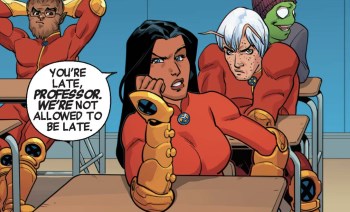 In the world depicting the events after X-Men the Animated series, Charles Xavier opened up the mansion to the outside world and accepted dozens of students to the new school. Monet was one of them and she immediately started rubbing her fellow students the wrong way with her high-and-mighty attitude, especially Jubilee. 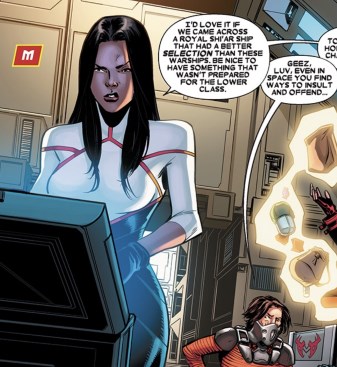 In the wake of Earth's war against the alien Builders, the planet was destroyed leaving pockets of humanity struggling for survival across the universe. Monet was lucky enough to have been spared the destruction alongside some other X-Men. Flying through space in the X-Men's Backbird jet, the group relied on scavanging other ships to survive. Years later they came across the Avengers' Quinjet and they welcomed the survivors on board. Things weren't how they seemed though with Monet and the team discovering the heroes were being controlled by one of Thanos's henchmen, Supergiant. A fight ensued with Monet personally taking on Shang Chi. The Avengers were soon freed of being controlled and the two teams joined forces to become the new X-Men.