(Click on an image to see a larger version)

1) As Penance, Monet wore the outfit that came along with the body. The entire suit was made of black straps of an unknown fabric, apparently the only material to withstand her razor-sharp skin. [Generation X (1st series) #1]

2) Once Monet traded placed with her twin sisters, who had been posing as her, she continued to wear the standard Generation X uniform that “Monet” had been using before. It was a red bodysuit with yellow elbow pads, gloves, boots, and belt with a blue X on it. [Generation X (1st series) #43]

3) When the Massachusetts Academy was reopened to the public and a large number of human students enrolled, Generation X adopted new costumes to keep their identities secret. Besides the addition of facemasks, these costumes had a more equal red-and-yellow color scheme. [Generation X (1st series) #51]

4) Following the school’s secret of harboring mutants being outed, Generation X redesigned their costumes again. Monet wore a red bodysuit with a stylized red and yellow X on the chest. The half-long sleeves and legs were slightly slit near the ends. The most controversial feature of this outfit was a half-open, white skirt with blue trim and huge pockets, apparently attached to Monet’s bodysuit at the sides and in the back. [Generation X (1st series) #63]

5) A short time later, the team members received customized uniforms made of a smart material. On top of a reddish-brown bodysuit with half-long sleeves, Monet wore a tight T-shirt in two shades of red-brown with yellow lining and a huge yellow encircled X-symbol on her chest. The ensemble was complete once again by a half-open skirt, though this time it was of a semi-transparent fabric and no longer featured such bulky pockets. Actually, Monet never wore that outfit on a mission, as, only a couple of days later, Generation X disbanded. [Generation X (1st series) #71]

6) While working with Banshee’s X-Corps, Monet had two different uniforms to chose from. Most of the time, she wore the standard uniform for field missions, made of black leather with red trimming. [Uncanny X-Men #403] The other uniform was a more business-like out: a black suit with a red shirt and black tie, with red trim in different areas. Monet continued to wear both costumes when she joined X-Corporation Europe, even though she would occasionally replace the black jacket with one of the X-Men’s black and yellow leather jackets. [New X-Men (1st series) #128]

8) Later on, she wore a much more casual look, wearing a varying number of T-shirts and coats on top of her red leather pants. [X-Factor (3rd series) #13] 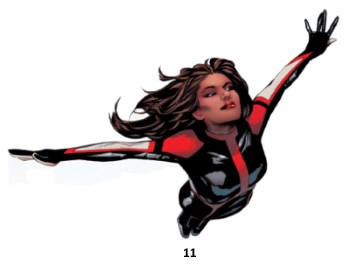 9) When Monet eventually took to wearing an official costume again, it was a black and white one-piece that zipped up the front. In theory. It had red piping between the colored segments and was accompanied by black boots, gloves and a belt with an X on. She sometimes added a long black trench coat to the look too. [X-Factor (1st series) #200]

10) After officially joining the X-Men, Monet altered her X-Factor costume slightly. She kept the white segment on her chest and the rest of the bodysuit was black, with red piping running throughout. [X-Men (4th series) #9]

11) Upon joining Magneto’s team of X-Men, Monet altered her look once more. Keeping the general design of the black bodysuit, she had red lines going down the chest and legs whilst keeping some white paneling on the arms, hands and legs. [Uncanny X-Men (4th series) #1]

-) When operating as a member of the Hellfire Club, Monet wore a very risqué outfit that was in line with the role. As she was the White Queen, she wore an all-white bodice, white stockings that fastened to it and long white gloves. [Uncanny X-Men (4th series) #12]

12) As M-Plate, Monet’s skin turned a pale grey like her brother’s and she took to wearing a black and red bodysuit. She accompanied it with a red headband and long brown trench coat. [Generation X (2nd series) #4]

-) after leaving the X-Men and being brainwashed by Mentallo, she took to wearing her second X-Factor costume once more