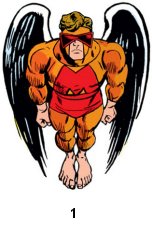 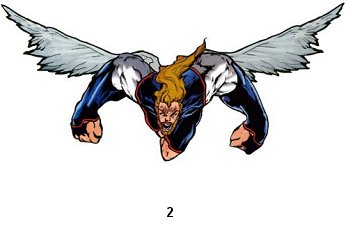 1) Mimic's original costume was primarily orange, with red trunks and a large red 'M' on his chest. An orange headpiece left his hair and face exposed and his eyes were covered by ruby quartz goggles for when he possessed Cyclops's powers. To make use of Beast's agility and oversized hands and feet, he wore no gloves or boots. A pair of red bands encircled his wrists and shins where his costume ended. [X-Men (1st series) #19]

2) After an encounter with X-Force, Mimic adopted a new uniform, possibly provided by Sledge. This costume was primarily blue, with white sections on his shoulder and forearm, marked by a thin red trim. He had a red line extending down his chest and forming into a symbol outline on his abdomen. His blue sleeves and leggings were cut like his original uniform to give access to his bestial hands and feet with red trim where they ended. He also occasionally wore white gloves and high red boots. [X-Force (1st series) #52] 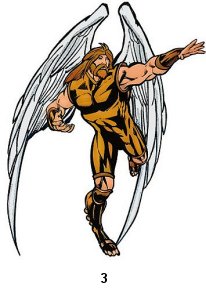 3) During his stint with the Brotherhood, Mimic wore a variety of sleeveless bodysuits with leggings that stopped above the knees. He also wore matching bands around his forearms and armored boots or shin-guards that were open at the toes. This entire costume was alternately colored in shades of orange, tan, blue and purple. [Uncanny X-Men (1st series) #363]

4) When he joined the Dark X-Men, Mimic cleaned up the long hair and beard he’d been sporting for years. He now wears a blue bodysuit with short sleeves extending up into a cowl that exposes his face, ears and hair. A massive white letter ‘M’ adorns his chest, stretching from his shoulders all the way down the sides of his legs. He wears large blue wristbands with similar white Ms on them. Mimic also wears a standard belt with a red and black ‘X’ on the buckle. He continued to wear this costume during his time with the X-Men and his solo career. [Uncanny X-Men (1st series) #513]