Kevin Sidney of Earth-1081 knew from birth that he was a mutant, having been born as a malleable blob of white goo. As he aged, Kevin developed his shapeshifting abilities and it didn’t 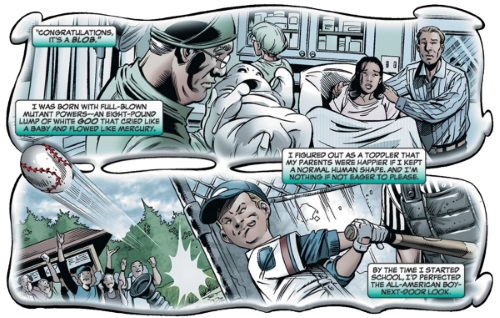 take long for him to learn that taking on the appearance of an all-American, boy-next-door look not only made his parents feel more comfortable, but also helped avoid awkward situations. As he grew, he also developed a knack to be whatever everyone wanted; being great at school, sports and generally well-liked.

When he was thirteen, Kevin’s mother died from lung cancer, making his father hard and withdrawn. This in turn drove Kevin to become more and more humorous in an effort to cheer his father up. Instead, his antics resulted in his dad shipping him off to boarding school; at Xavier’s School for Gifted Youngsters.

At the school, Kevin earned himself the codename Morph and a role as leader of the X-Men’s junior team, the New Mutants. Morph excelled at the role and after graduating with a masters in computer engineering also graduated to full X-Men status. He did not stay with the X-Men forever, however, and eventually moved on to a role with the Avengers, becoming even more popular than Captain America. [Exiles (1st series) #1, 80]

Despite his success as an Avenger, Kevin later returned to a role amongst the X-Men. During one of their missions against the cursed Stonehenge, he found himself suddenly unhinged from time and thrown into an unfamiliar desert. Kevin was not alone either, meeting five other complete strangers, all of whom were equally confused by the situation. In spite of their situation, Morph was still ever the charmer, propositioning the two women amongst the group, Blink and Nocturne. 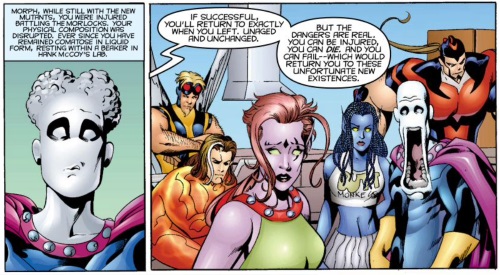 An entity who introduced himself as the Timebroker, claiming to be derived from their collective subconscious, explained to the group that they had become “unhinged from time” due to cascading ripples through time that had altered their native timelines. The group’s mission was to repair damaged realities, being able to eventually return to their own timelines once they were restored. Complicating matters further for him, Morph learned from the Timebroker that in his damaged reality Morph’s physical form was disrupted during a fight with the Morlocks. If he returned home, he would find himself in a comatose, liquefied state in Beast’s lab.

With teammate Blink receiving a device called a Tallus to give instructions, the team dubbed themselves “the Exiles” and were sent on their first mission. Despite their grave situation, Morph maintained his light-hearted attitude, regularly cracking jokes, much to the chagrin of his comrades. Their first mission went hopelessly wrong when they unleashed that world’s Charles Xavier, who in this reality was a psychopathic mass murderer. Except for Blink, Morph and his comrades had expected Charles to be like the Xavier of their worlds; a great teacher. Their mistake cost them a teammate’s life and left a quarter million people brain dead. In the end, they were successful in the mission but not before they met new teammate Mario Yashida, Sunfire. [Exiles (1st series) #1-2]

On their next mission, the Exiles found themselves at the trial of Jean Grey, tasked with ensuring Jean Grey died. The group disguised themselves as aliens and volunteered to aid the Imperial Guard with the trial by combat. During their down time, Morph spent some time getting to know their newest member Sunfire. Mariko was surprised by Morph’s nonchalance to their situation, to which Morph explained how he always strived to see the lighter side of every situation. [Exiles (1st series) #3-4] 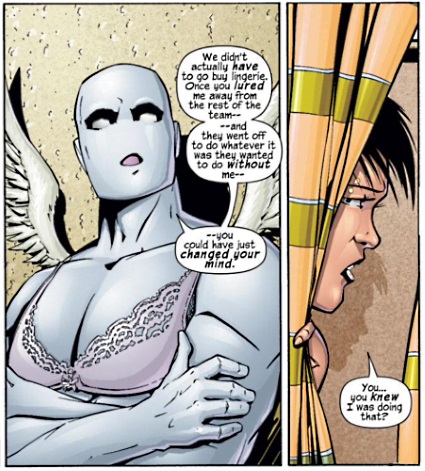 His fondness for Sunfire grew over their next few missions and Morph soon became overt in expressing his interest for the woman, albeit jokingly. On one brief break between missions, Mariko helped give the others Exiles some "couples' time" at the beach by taking Morph with her lingerie shopping. Morph figured out pretty quickly Mariko had lied to him to get him away from the group and, while his feelings were hurt, he used it as an opportunity to get to know her better. He revealed to her the story of his mother’s death and how his father closed himself off. Sunfire reciprocated by sharing her relationship with her parents and that she was gay. [Exiles (1st series) #5-6, 8, 11] 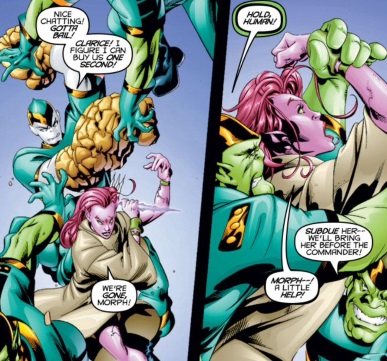 before, the majority of the group were quickly captured by the aliens with only Morph and Blink managing to evade capture. Together they spent the next month alone, trying to break their allies out of Skrull prison, where they were being forced to fight in gladiatorial combat. While Blink started to break from the stress, Morph maintained his jovial nature. After several unsuccessful attempts to free their friends, their big break came from a surprising source: Galactus and his herald, Terrrax. Ultimately, the group were successful in defeating Galactus, but Morph lost another friend in Thunderbird, who sacrificed himself to save them all. [Exiles (1st series) #8-10]

In the weeks that followed, the team completed various missions, some of which were not to Morph’s liking, such as working with a similar team of alternate realty killers, Weapon X, or aiding Doctor Doom. However, Morph nevertheless maintained his dedication to bringing levity to the team, particularly when Nocturne was depressed after losing both her lover Thunderbird and their unborn baby. He also repeatedly expressed his sexual frustration to anyone that would listen, though few ever did. [Exiles (1st series) 12-17] 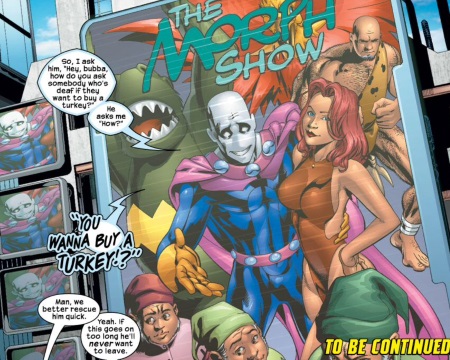 After successfully completing another mission, the team’s teleport was hijacked by Mojo. It turned out that Morph was the star of the most popular show in Mojoverse history, and Mojo wanted him in a new show. Mojo forced Morph’s compliance by torturing Nocturne, compelling him to perform all day every day in “The Morph Show.” Morph’s nightmare ended when his friends saved him. Despite his rage at what Mojo put him through, he was stopped from killing the despot by the Timebroker. Aside from his own rage, Morph felt tremendous guilt, feeling responsible for what his friends were put through, despite their protests to the contrary. [Exiles (1st series) #18-19]