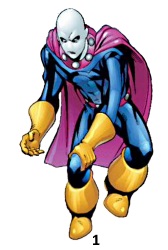 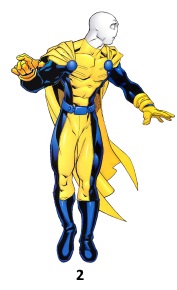 -) During his life before the Exiles, Morph was a member of the New Mutants, X-Men and Avengers. Like the other New Mutants, he wore their standards yellow and black uniform and then adopted various blue and yellow costumes during his superhero career. [Exiles (1st series) #80]

1) When he joined the Exiles, Morph wore a costume very similar to his Age of Apocalypse counterpart. It consisted of a dark blue body suit with navy blue stripes running down his arms, legs and torso, accompanied by yellow boots and gloves. The costume was capped off with a purple cape, connected to a prominent studded ring over his collarbone. [Exiles (1st series) #1]

2) Morph’s next costume, which became his most regular, consisted of a yellow body suit with dark blue sleeves and a dark blue stripe running down each side. He stuck with the yellow and blue aesthetic with yellow gloves and dark blue boots. Clearly a lover of capes, he included a cape in this outfit too, this time yellow and connected to his shoulder by large buttons, which varied between blue, silver and yellow. [Exiles (1st series) #23]

-) Later, when Morph was separated from Proteus, he returned to a variation of his original Exiles costume.