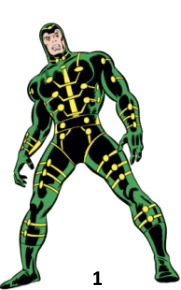 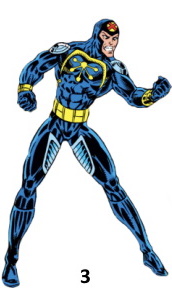 1) As a child, Jamie began wearing this green containment suit with several metallic, golden straps and control elements all over it. Though he later was no longer forced to wear the suit all the time, Jamie continued to wear it as a costume. [Giant Size Fantastic Four #4]

2) Following an invitation from Val Cooper, Jamie joined the governmentally sanctioned X-Factor. Although the team look was optional, Multiple Man wore an outfit in the team colors of blue and gold. Basically, his was a blue full body suit with several pads and straps on it. On the forehead of his mask/hood, there was a huge X. Jamie often wore a trenchcoat over his costume. [X-Factor (1st series) #72]

3) Eventually, the costume was slightly redesigned, a golden belt was added while several of the other metallic elements were changed in color. The biggest change was the new logo on chest area, sporting a number of circles, connected to each other. [X-Factor (1st series) #95]

-) When he first came back to life, Jamie wore a number of different generic costumes for his duplicates. [X-Factor (1st series) #127] While on Genosha, Jamie was wearing a version of his original containment suit, only this time it was colored blue instead of green. [Uncanny X-Men Annual ‘99]

4) Joining Banshee’s paramilitary outfit, Jamie received the standard X-Corps uniform, made of black leather with red trimming. The outfit was completed with a black version of Multiple Man’s trademark hood/headpiece. [Uncanny X-Men (1st series) #401] Even as part of the X-Corporation, Jamie still wore this uniform. 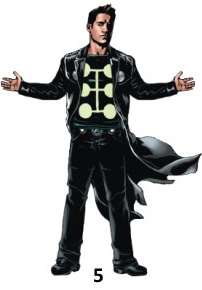 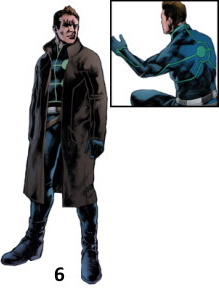 5) When Jamie first started X-Factor Investigations he wore normal street clothes and a trenchcoat over a green T-shirt with the same symbol as his original costume. [Madrox #1]

6) After returning to X-Factor, Jamie and the team adopted new or modified costumes, more like super-hero gear than their previous clothes. Madrox's traditional shirt still had the six circles on the front of a green backdrop, now as part of a full body suit. A new element of the design had the six circles connected by a series of lines to one circle on the back, signifying his replication process. [X-Factor (1st series) #200]

--) The new Prime who emerged after Jamie's death went back to the trademark green shirt with yellow circles instead of the upgraded costume. [Uncanny X-Men (5th series) #11]

7) With Warlock as a symbiotically bonded partner, a duplicate of Jamie Madrox became the independent Warlox. Presenting as Madrox on his right side and Warlock on his left, Warlox used his techno-organic shape-shifting abilities to simulate Madrox's trenchcoat and classic shirt, only in Technarch colors. [Uncanny X-Men (5th series) #15]