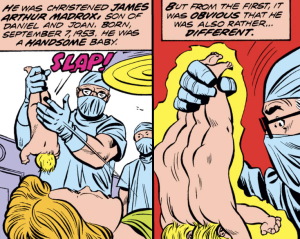 James Arthur Madrox was born to Daniel and Joan Madrox. From birth, it was rather obvious that Jamie was different, as when the doctor slapped the baby, he suddenly held two in his arms. Dr. Daniel Madrox worked in the Los Alamos Nuclear Research Center and it has been heavily implied that this might have been the cause of Jamie’s mutation. Professor Charles Xavier, an old friend of the family, suggested for the Madrox family to move away to an isolated farm in Kansas to give the boy a chance to grow up without drawing any unwanted attention.

At a certain age, his parents made him wear a special suit, designed to keep his mutant powers 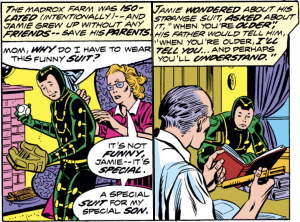 under control, but they never revealed its purpose to him. Jamie grew up without any friends, save his parents, and they were taken from him early. A man named Damian Tryp came the Madrox farm and claimed Jamie wasn't a mutant at all, but a throwback to an earlier genetic subspecies that he called "Killcrops". When the Madroxes refused to turn Jamie over to his care, Tryp used his powers to start a freak tornado that killed the couple. Tryp also modified Jamie's memories, suppressing the boy's knowledge of every having met him. [X-Factor (3rd series) #10]  Now an orphan, Jamie worked the farm alone, just like his parents had taught him, his only friend being a special teaching computer designed by Professor Xavier and his father, as Jamie could never attend a regular school. Though Jamie didn’t like it, with time he got used to being alone.

However, as the suit was no longer being maintained, in time some of its control elements started to burn out and it began to malfunction. More and more energy was needed to provide its functions and, when the suit no longer generated enough power on its own, it leeched off electric energies from whatever power source nearby. The suit also affected Jamie on a psychological level; he was now afraid of being alone, went slowly insane and felt himself drawn to New York, where he found more and more energy to absorb. As he caused entire blocks of the city to be hit by blackouts, his presence was recognized by the Fantastic Four.  The four heroes had never encountered a foe 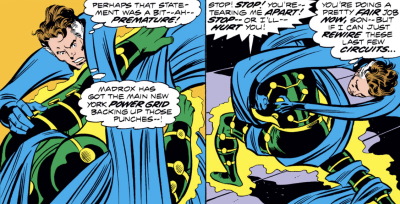 with self-replicating abilities, and soon they found themselves outnumbered as, every time Madrox was hit, he created a duplicate of himself. It was Professor Xavier who, after being alerted by Cerebro to Jamie being in New York, used his telepathy to shut off most of the Madroxes minds, allowing Mr. Fantastic to repair the power negating outfit, while battling the confused young man at the same time. [Giant Size Fantastic Four #4]

Afterwards, Xavier took Jamie with his to his school in Westchester, where he treated the boy’s temporary madness and also helped him to cope with his powers. Jamie was even offered to join the X-Men, but he denied, not feeling comfortable with so many people around. Instead, Xavier had a different idea and took Jamie to Moira MacTaggert’s Muir Island complex, where he wouldn’t be all by himself, and, in Moira, he had someone experienced in the care for difficult mutant situations. Mostly, Jamie helped Moira as a lab assistant, though he also must have 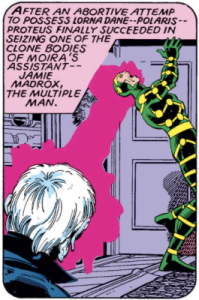 continued some of his training under her care. He even reached a point where his containment suit was not really needed anymore, other than as a good looking costume and a failsafe device for if he should lose control again.

In time, more of Xavier’s students came to Muir; Havok and Polaris to recover from a period of mind control and Phoenix when she believed the other X-Men had died. One day, the dangerous Proteus escaped from his holding cell in the Research complex. Having no physical body, Proteus was in need of host bodies, which he quickly burned out. In order to cover more ground while searching the lab complex, Jamie created a number of duplicates, though one of them fell prey to Proteus. In the instant his duplicate was possessed and effectively died, Jamie felt a psychic backlash that weakened him. [X-Men (1st series) #125-126]

Once the danger of Proteus was ended by the remaining X-Men, Jamie was again offered to join the group, but once more he declined, preferring to run the lab together with Moira and Banshee, who recently had lost his powers. [X-Men (1st series) #129] Several months later, they were joined by Banshee’s daughter, Theresa, aka Siryn, who also moved to Muir. Being around the same age, she and Jamie grew pretty close.

Up till then, Jamie and his duplicates had never been apart from each other for longer periods of time and he never bothered to think about what they really were. While Jamie used the dupes as extensions of his own self, there was the problem of them being fully functioning human beings and, as such, they might be inclined to having the same rights as Jamie himself. Given enough time on their own, the duplicates began to vary, developing a sense of independence and a unique identity separate from "Jamie-Prime". On occasion, this independent streak would develop in a particular duplicate far more quickly than it would in others. One duplicate wanted to stay apart from Jamie and have the chance to live a life by itself. Instead of openly addressing the problem, this duplicate kept sulking around, only when Jamie was asleep, and he occasionally drugged him to have a chance to make some new experiences in his stead. [X-Factor (1st series) #75] 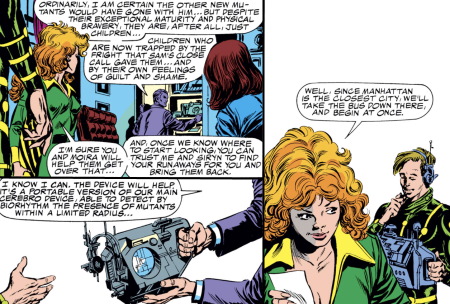 to help search for Sunspot and Warlock, two of the New Mutants, who had run away after a misunderstanding. Meanwhile the “main“ Jamie stayed behind on Muir Island, unaware of their quest. Shortly after arriving in Westchester, Siryn and Multiple Man grabbed a portable Cerebro device and a photo of Sunspot and went to Manhattan to start looking. In order to cover more ground, Jamie created a number of duplicates, which is when it happened again.

After bumping into a woman, one duplicate helped her carry her packages to her home. Startled 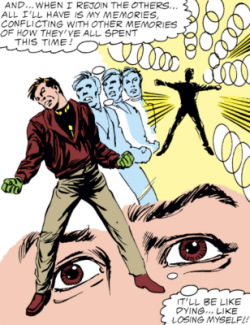 by the many things there were to see in New York, this version of Jamie too did not want to get reabsorbed, as that would also mean the memories of what he had seen would be erased or lessened as they conflicted with those of the other Jamies. [Fallen Angels 1st series) #1-3]

Meanwhile, Theresa and the other Jamies found Bobby and Warlock, who had already joined an outfit called Fallen Angels, a group of teenage thieves led by the Vanisher. The two New Mutants weren’t willing to return back to Westchester and (thanks to a girl named Ariel with persuasive abilities) Multiple Man and Siryn stayed with the Angels to look after them. Chance, another mutant among the group, had the ability to increase or negate others’ powers, which caused several problems for Jamie, as she didn’t have it under control. Sometimes a minor hit caused him to create four duplicates at once, sometimes he didn’t multiply at all. 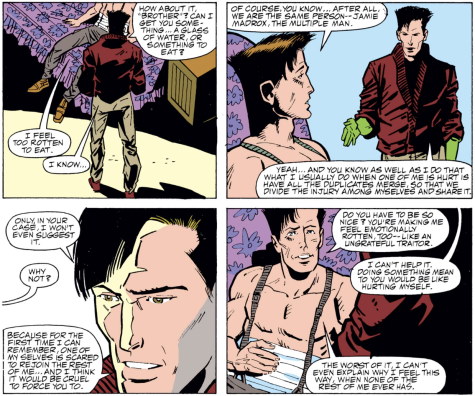 Things started to get confusing when the Fallen Angels accidentally ran into the one duplicate that had decided not to return. Not wanting to get reabsorbed, that duplicate tried to escape but was run over by a bicycle and had several ribs broken. The Fallen Angels took the injured duplicate to their hideout, where the other Jamie respected the decision of his “brother” not to merge him back into himself, even if rejoining would have helped heal his busted ribs. [Fallen Angels (1st series) #4-6]

As it turned out, the Fallen Angels were only a ruse by some aliens from a place called the Coconut Grove to gather up a number of mutants for them to study. They believed their own race at a genetic dead-end and wanted to study the source of mutation in order to find a cure. After capturing the entire group, the Coconut aliens wanted to perform experiments on the mutants among them and, if needed, extract whatever genetic material was needed to enhance themselves. During these events, the injured Madrox was jostled and he produced another independent, injured Madrox. To demonstrate their willingness to do whatever necessary, the Coconut Grove killed one of Multiple Man’s duplicates in front of the team. Later on, the Fallen Angels managed to break free, but the injured Jamie knew that he was a liability and agreed to be reabsorbed. Following a suggestion from Sunspot, Multiple Man tried a new stunt: the healthy version first multiplied himself into about twenty duplicates, and then merged with the one wounded Jamie. Thus his injuries and the pain were greatly reduced. On the downside, the same held true for the memories and experiences made by that one Madrox.

Once the team had safely returned to Earth, Sunspot and Warlock saw the error of their ways and willingly returned to the New Mutants. Siryn and Multiple Man decided to stay with the Fallen Angels a short while longer, to guide them back to the straight and narrow, much to the Vanisher’s discomfort. [Fallen Angels (1st series) #7-8] Before long, though, the two returned to Muir Island and reunited with Moira. Jamie-Prime had been on Muir Island all along, but somehow the rogue Jamie arranged things so that Siryn was unaware she had been with a duplicate the whole time.