Nobody seemed to notice the confusion but, with the Shadow King already clouding everyone’s minds and slowly influencing the residents of Muir, that’s no big surprise. Trapped on the astral plane, Xavier’s archenemy reached out through a host body he was using as his nexus and 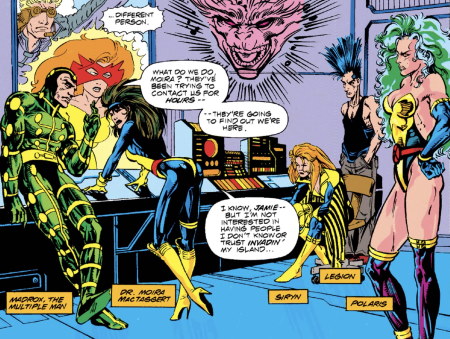 brought Moira MacTaggert and her friends under his control. Within a matters of weeks, all of them, including Jamie, were mere puppets in the master telepath’s hands and he made several mutants compete in an arena, just to please himself. By the time his machinations were recognized by the X-Men, it already seemed to late. Quickly, they traveled to the island but were overpowered by the people they remembered as friends and allies. Gambit, inexperienced with Jamie’s powers, hit him with charged playing cards, helping Jamie to create duplicates of himself, and was soon overwhelmed. [Uncanny X-Men Annual #15, Uncanny X-Men (1st series) #278]

Only when Professor called in his original students, at the time going by the name X-Factor, could the Shadow King and his temporary host, Legion, be defeated, though most of Muir Island was destroyed during the battle. As the original five rejoined the X-Men in the aftermath of the battle and the remaining members of Freedom Force had disbanded shortly before, the U.S. government was left without any official team of super-powered operatives to deal with mutant issues. Val Cooper used the chance presented to her and offered Multiple Man, among others, to become part of a new governmentally sanctioned group. His home in ruins and the other residents of Muir too going separate ways, Jamie accepted and moved to Washington, D.C. [Uncanny X-Men (1st series) #280, X-Factor (1st series) #70]

Already before the new team could be presented to the media, Jamie was ambushed while house-sitting for a friend. When someone knocked on the door, Jamie created a duplicate of himself to 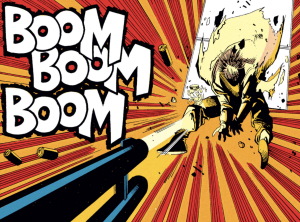 answer, only to walk right into the ambush. Hidden behind the door, Jamie watched in horror as his other self was shot and he waited until the rest of the new X-Factor showed up before coming out of his hiding place, afraid the killer was still there. When he tried to “clean up after himself,” wanting to reabsorb the corpse, he found that he couldn’t. Jamie had always considered his duplicates to be mere "constructs" made by his power, and not really alive. (He had always thought he could reabsorb the dupe Proteus took over, had he been able to find it.) For the first time, Jamie began to wonder about the nature of his copies. Did he have any right to create them just as cannon fodder to perform some tasks he himself deemed to risky? [X-Factor (1st series) #71-72]

At the time, Multiple Man was still unaware of his renegade duplicate running around, but he finally 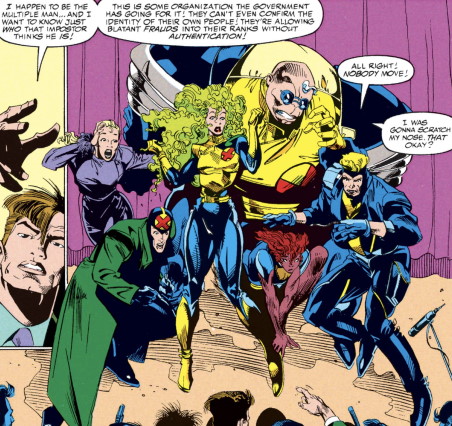 learned over the next days. Everything fell into place during the press conference where Val Cooper introduced the new X-Factor, consisting of Havok, Polaris, Wolfsbane, Strong Guy, Quicksilver and Multiple Man. However, among the crowd of reporters was the renegade Jamie duplicate, who accused the “main” Jamie of being an imposter. The two Madroxes started battling each other, each calling up as many duplicates as possible. Apparently 40 duplicates is Multiple Man’s upper limit, as when there were twenty pairs of Madroxes fighting each other all over Washington, no more Jamies appeared, even though the others kept hitting each other.

X-Factor knocked out all Jamies one by one, until only the two remained who had started the fight. Apparently, BOTH Jamies were dominant enough not to disappear when the Prime was knocked unconscious. Unsure who to believe, both Multiple Men were strapped into special chairs in the basement of X-Factor's base. Unable to move, neither one could hit himself and create duplicates. The rogue Jamie attempted to defend himself by describing his adventures with the Fallen Angels and Coconut Grove, which X-Factor's Jamie had no knowledge of experiencing. A polygraph expert was called in and, after extensive tests, he declared that the Jamie among X-Factor was the fake. Moira MacTaggert also pointed in that direction, confirming the Coconut Grove adventure was something Jamie shared with her in the past. It didn’t occur to any of his teammates that the two Madroxes might have split apart before that incident.

The renegade Jamie was let go and he absorbed the other Jamie into himself. Despite X-Factor telling him that of course he would be welcome among the team too, Multiple Man left, wanting no part in it. He soon met with Senator Steven Shaffran, the Nasty Boys and Mister Sinister, the 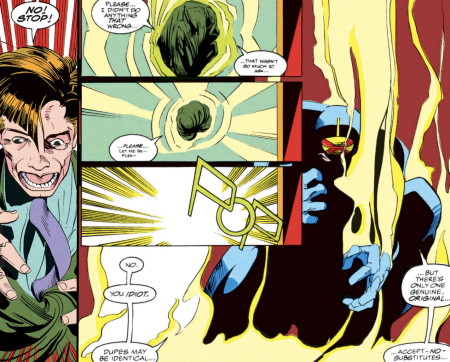 mastermind behind all of it.  The entire scheme was arranged by the mutant Senator Shaffran to gain power by making a political rival out of X-Factor. When Sinister had found the renegade Jamie, he had Shaffran use his probability-altering powers to enforce his different personality. Shaffran's effect allowed the rogue duplicate to exist independently when he chose, even creating mental blocks that kept Jamie-Prime from remembering the rogue's activities when they were separated. In a first attempt to take “main” Jamie’s place, the renegade version had shot him at the apartment and, after that had failed, Sinister posed as the polygraph expert, testifying on his behalf. Everything went according to their plans. However, all of a sudden, Jamie’s body began to collapse in upon itself and vanished, before reappearing again in his X-Factor persona. The “main“ Jamie’s personality was the stronger one and, together with his teammates, he managed to put a stop to Sinister schemes and reclaim the full scope of his own mind. [X-Factor (1st series) #73-75]

With most of the team busy with another assignment, Multiple Man and Quicksilver alone were sent to investigate a murder case in Maine, the prime suspect being a mutant called Rhapsody, aka Rachel Argosy. The young woman had been working as a music teacher but, shortly after her skin turned blue and she manifested her ability of “causing weird things whenever playing an 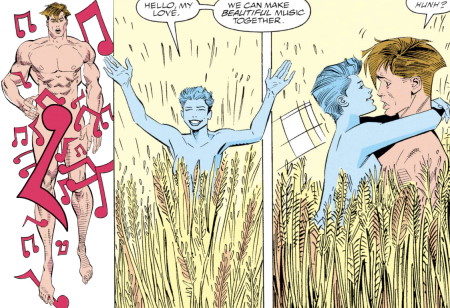 instrument,” the school board voted to terminate her employment, despite her popularity among the kids. The guy responsible for her being voted out was found dead two days later, with Rachel standing right outside his house. After being exposed to the effect of her music, Jamie was entranced by the beautiful Rhapsody and convinced Quicksilver to give her the benefit of doubt and help her prove her innocence. He was even ready to bust her out of prison when she had a slip of the tongue and accidentally revealed that she had tried to use her power on the man from the school board to make him see his error, only to cause his death when he was overwhelmed by sheer ecstasy. Feeling used and manipulated, Jamie left Rhapsody in prison, and returned home to Washington. [X-Factor (1st series) #79-81] 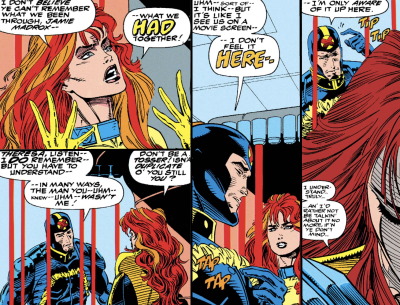 When Cable was suspected of having tried to kill Charles Xavier during the crisis known as X-Cutioner’s Song, X-Factor and the X-Men teamed up to hunt down Cable’s team X-Force, including Siryn. After the young mutants had been arrested,  Jamie approached Theresa in the makeshift cells they had in the Danger Room. They discussed their past, and the memories Jamie's renegade duplicate made with Siryn while among the Fallen Angels. Jamie made it painfully clear to her that it was only his renegade duplicate that she had formed the close friendship with and, though he retained some of his memories, he was not emotionally attached to them. [X-Force (1st series) #17] 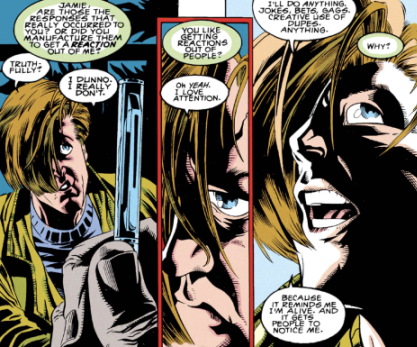 Among X-Factor, Multiple Man and Strong Guy got along well, both of them having an odd sense of humor and constantly joking. A session with superhero psychiatrist Dr. Leonard Samson uncovered the reason for Jamie’s humorous attitude. Due to his rather unusual childhood, Jamie does whatever necessary to receive some attention and to get noticed, as he never wants to be alone again. [X-Factor (1st series) #87]