Jamie had long had trouble with deciding on his place in the world. It was revealed he had been sending "explorer" dupes out into the world on their own for years to learn a new trade, language or a new way of thinking, and eventually return to him and "share" what they had learned through the reabsorbing. It also became clear that Multiple Man's power was no longer working exactly as it had years ago, before his death at the Legacy Virus. For one thing, Jamie no longer absorbed half of a duplicate's injuries when merging with them: he only picked up on residual psychosomatic trauma a dupe may have been experiencing.

More importantly, a new wrinkle in his powers was causing many duplicates he created to act as manifestations of one aspect of his personality or another, instead of exact copies of his psyche. This created a humorous sense of novelty at times with "inner peace dupes" or "aggressive dupes," but could also prove troubling if he manifested "self-loathing dupes" or "depressed dupes." 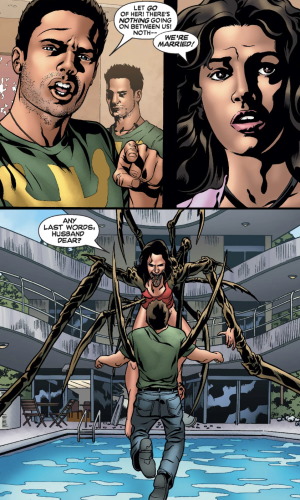 Not long after setting up his new practice, Jamie became involved in a murder mystery case... with himself as the victim. A wayward dupe returned home covered in his own blood. Madrox Prime absorbed his dying self just as the duplicate was passing away, giving Jamie only a few snapshots of people and places from the dupe's mind, which led him to Chicago. Meeting up with an old reporter contact of his, Jamie learned that the woman he saw in his dupe's mind was named Shelia DeSoto, the main squeeze of a local crime boss named Edward Vance. After tracking Sheila down, Madrox was surprised to learn that she had actually married his other self, a fact that did little to impress Vance when he captured Madrox. Jamie managed to escape with Sheila for a brief time but, as it turned out, Sheila was some kind of malevolent super-being manipulating Vance and Multiple Man himself to acquire control over the Chicago mobs. Madrox's reporter friend, Stringer, was killed in the melee, but Sheila was ultimately gunned down by Vance after Jamie tricked her into revealing her true, grotesque self before him. Over the course of this case, Madrox also encountered another "multiple man" named Clay, who was working as a hitman for both Sheila and Vance. Clay was apparently killed, but more than anyone Jamie knew how unlikely it was that Clay was truly gone. [Madrox #1-5]

As M-Day fell, a large percentage of the mutant population suddenly lost their powers, and Xavier's people shut down their X-Corporation offices around the globe in order to "close ranks." Few places felt the Decimation worse than Mutant Town in New York, and X-Factor Investigations' phone began ringing off the hook with a wide variety of "mutant problems," ranging from people wanting to know the story behind M-Day to mutants having trouble coping with their new situations, and many more besides. Madrox successfully parlayed his duplication power to win one million dollars in a game show, turning the money towards buying out his entire office building and upgrading his resources as a detective agency.

Madrox also expanded X-Factor Investigations to include a few more operatives. Guido and 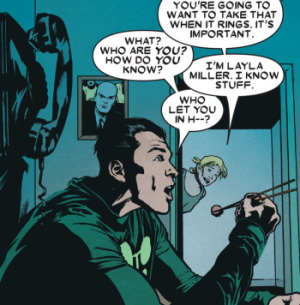 Rahne were joined by old friends Siryn, M and Rictor, who had recently served with Madrox in X-Corporation Paris. Rictor had lost his powers and was on the verge of suicide when X-Factor found him, so Madrox sent out a dupe to literally talk Ric off the ledge. The overly-positive dupe Jamie chose was something else altogether, however -- an unpredictable "x-factor" in Jamie's mind that lied to Jamie and then shoved Rictor off the roof instead of saving him. Monet caught Ric and Madrox reabsorbed the wayward dupe, but he had to confront the fact that there was a part of him he could not trust. Another curious addition to the agency was a girl in her early teens named Layla Miller who showed up one day and began helping out, claiming to "know stuff." [X-Factor (3rd series) #1-2] 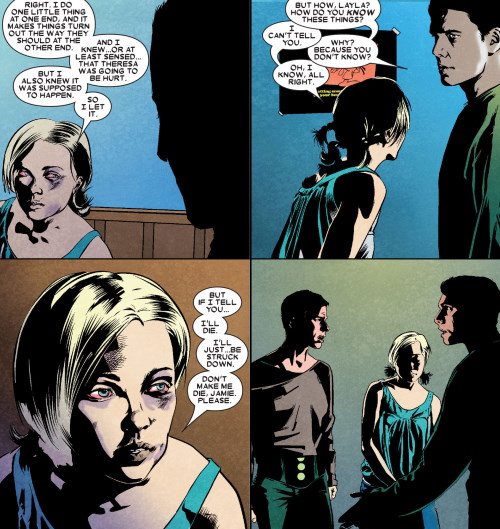 In part due to Layla's influence, Jamie and X-Factor found themselves involved with several cases putting them at odds with Singularity Investigations. A big budget consulting services firm, Singularity was run by Damian Tryp Sr. and Jr. On one X-Factor case, their informant was murdered by Singularity, and in another an X-Factor client was set up for a murder by the rival firm before Jamie and Monet got the real killer to confess. Damian Tryp, Jr. caught Siryn by surprise and beat her senseless with a bat for their interventions. This led X-Factor (Rictor in particular) to question Layla's influence on their cases. A woman from the orphanage Layla once inhabited came to take her back but, once Madrox and Wolfsbane saw the beatings Layla was getting from the other kids for being a former mutant, they brought her back to X-Factor with many of their questions about her prescience still unanswered. Meanwhile, Guido and Jamie (actually, about 40 Jamies) paid Tryp, Jr. a visit to give him a warning about attacking one of their people again. [X-Factor (3rd series) #3-6]

The conflict between X-Factor and Singularity led the latter agency to reach out to Madrox. Damian Tryp, Sr. and Jr. invited Jamie to a meeting at their offices. Surprisingly, Tryp offered to buy out X-Factor Investigations. $50,000,000 to own a competitor Jamie had barely sunk a fraction of that value into. Madrox took the offer as a sign X-Factor was getting too close to something Singularity didn't want them to uncover. Numerous clients had tried to hire X-Factor to find out the reason behind the Decimation, but Madrox's people hadn't found any leads. Jamie 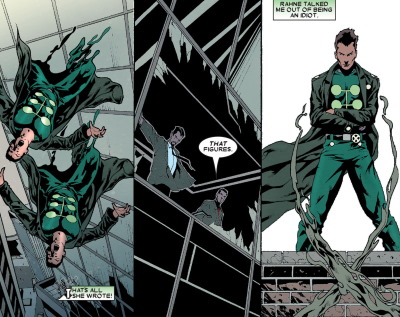 concluded Singularity must have been involved in M-Day, and in response to that Tryp revealed heretofore unknown super-powers to toss Jamie out the window. Fortunately, Madrox had been coached into being smart enough to send a dupe to the meeting. Standing on an adjacent rooftop, Jamie used his growing powers to reabsorb the dupe in freefall, acquiring both their memories and the concealed ring he used to palm a DNA sample from both Tryps when he shook their hands. [X-Factor (3rd series) #7]

Several ongoing mysteries deepened as Madrox got the results from the Tryps' genetic testing back from his contact at Modern Labs. Not only did they prove to be genetically distinct from either humans or mutants, but both Tryps had identical DNA, proving they were literally the same man. Tryp had raised Madrox's suspicions about people in his own circle lying to him about the Decimation, and both Siryn and the arriving Quicksilver soon corroborated the story of House of M. Cyclops and the X-Men knew what had caused the Decimation all along, and they kept X-Factor in the dark. Finally, the Superhuman Registration Act had been rushed through Congress, mandating all super-powered beings or costumed heroes in America to register with the government. X-Factor was confronted by Jamie Madrox, Agent of S.H.I.E.L.D., a duplicate sent off by Madrox years ago to study espionage who was now loyal to the establishment.

The team needed leadership, and Madrox sucked at leadership, or decision-making of any kind really. He laid into Layla for stringing them along, since she knew about the Decimation the whole time as well. Layla pointed out that nobody asked her about M-Day, and she never asked him to trust her; he just did because she was useful. After telling Jamie they would be arguing like this long after they got married (wait, what?), Layla sent him off into an encounter with Aegis, a former New Warrior being hunted under the Act. As she predicted, it helped Madrox make up his mind to oppose the SHRA. And while Pietro was partly responsible for the Decimation, X-Factor chose to defend him when the X-Men came to Mutant Town to collect him. As Madrox told Cyclops, at least Pietro was honest with them. He could have asylum as long as he remained within Mutant Town. 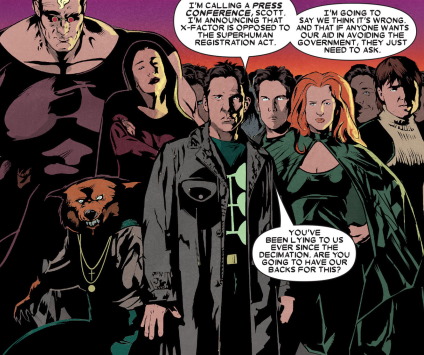 And while the X-Men had negotiated a neutrality with Iron Man over the Act, Madrox and X-Factor planned to actively announce their stance against it. [X-Factor (3rd series) #8-9]

Jamie Madrox held his press conference, leading to the Daily Bugle headline of "X-Factor to Gov't: DROP DEAD." The entire team got behind Jamie, supporting him for making an important decision like this and sticking to his principles. So, naturally, he immediately Madroxed things up. After a night of heavy drinking to celebrate their decision, Jamie woke up to find a dupe using the bathroom. After absorbing the dupe, Jamie realized he had separately slept with both M and Siryn the night before. Or the dupe had slept with both of them. Or he had slept with one and the dupe the other. The hangover and reabsorbing the dupe made separating out whose memories were whose difficult in their mingled minds. 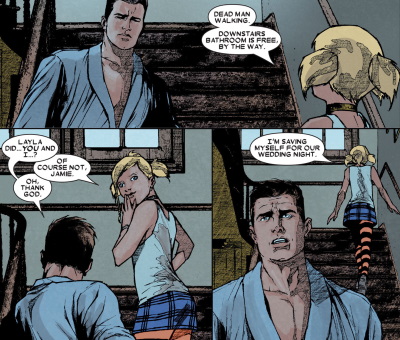 Before he could deal with that situation, Madrox and X-Factor found a new client on their doorstep, Henry Buchanan. Guido barely protected Buchanan from a rocket shot at them by Singularity outside the building. Buchanan revealed he had been commissioned by Singularity as a microbiologist to essentially recreate the Legacy Virus. Having already died once to the disease, Madrox had an extreme reaction to Buchanan's revelation, but the doctor had seen the light and wanted to reveal Singularity for participating in illegal bio-warfare. Before they could retrieve Buchanan's evidence, however, Guido was revealed as a sleeper agent for Singularity and killed the doctor at Tryp's behest. 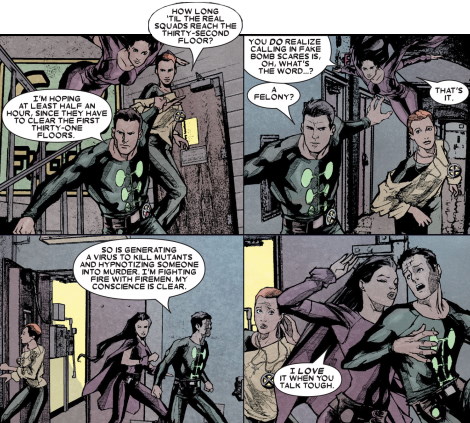 M was able to purge Guido of the behavioral conditioning, but the damage was done. Madrox and X-Factor decided to raid Singularity itself in order to retrieve Buchanan's original documents from his office. There they met a previously unknown third incarnation of Damian Tryp, an old man who revealed he was from a possible future and working with two younger incarnations of himself. Old Man Tryp claimed in his future the reversal of the Decimation led to a dystopian world of mutant tyranny, and X-Factor was instrument in causing it to happen. Monet's telepathy verified Tryp at least believed what he was saying, and a stray dupe created during the conflict fled in fear as Madrox tried to process what Tryp was saying.

Tryp, Sr. and Jr. caught X-Factor in the building and Madrox ordered his people to retreat. It was only after they did so that the "gutless" dupe revealed himself as the unpredictable "x-factor" dupe seen weeks earlier. This duplicate actually represented the portion of Jamie's mind that remembered Tryp visiting his parents when he was child, telling them Jamie was a "killcrop" instead 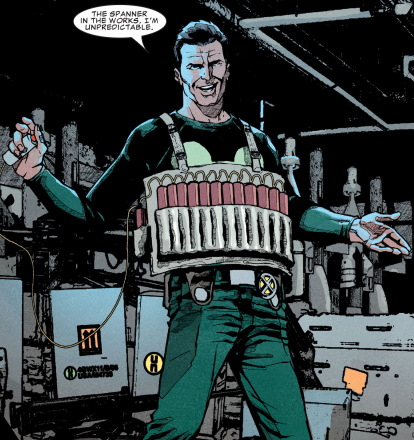 of a mutant, and then being responsible for the tornado that killed his family. Tryp had suppressed Jamie's memories of their encounter, but that suppressed knowledge and the trauma of his parents' death would manifest physically and independently through this dupe. This x-factor dupe used the Singularity armory to set off a massive explosion, killing himself and the younger two Tryps while also ending Singularity and their research. X-Factor barely escaped the blast radius as Jamie retroactively learned everything the dupe knew as a result of his death. [X-Factor (3rd series) #10-12]