However, underneath all his jokes, Jamie also had a serious side. When X-Factor accompanied a group of Genoshan refugees back to the island nation, they learned of a multitude of Mutates being infected with the Legacy Virus. Jamie had his awkward reunion with Moira for the first time since she vouched for his renegade dupe over him. When one of the patients escaped from the quarantine ward 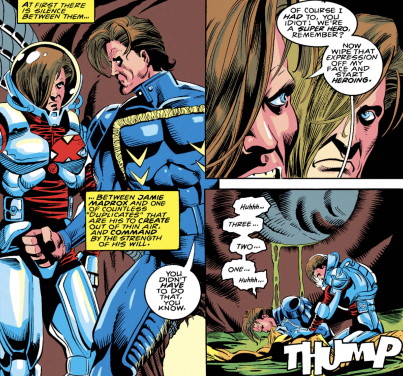 into the sewer system, X-Factor put on a set of containment suits and followed him, trying to get the Mutate back before he would run into the Magistrates, who had a more terminal solution in mind. While the other team members were busy dealing with the Magistrates, Jamie happened across the unfortunate Mutate, who was already in the illness’ final stages. Jamie needed to apply heart massage and mouth-to-mouth at the same time, so he created a duplicate of himself, one unprotected from the virus-ridden environment, as Jamie’s containment suit did not duplicate along with him. Multiple Man hid his actions (and their potential consequences) from his teammates. [X-Factor (1st series) #91]

Back in the United States, it quickly became rather obvious that Jamie indeed had contracted the Legacy Virus. Going by pure instinct, Jamie maintained being split into at least three duplicates on a permanent basis. After a while, though, like with every other victim of the fatal disease, his powers began to flare up. In Jamie’s case, that meant not a creation of more duplicates, but them getting even more individual than before.

It seemed that each copy was a manifestation of a different aspect of Multiple Man’s psyche, them often arguing and disagreeing with each other. Soon, his teammates began to notice that something was amiss with their friends, but those doubts were distracted by a happy, joking duplicate. When Polaris pieced it all together and tried to force Jamie to open up and get some help, she was even threatened by a rather harsh, demeaning duplicate to leave the scared, virus-carrying Jamie alone. [X-Factor (1st series) #95-97] 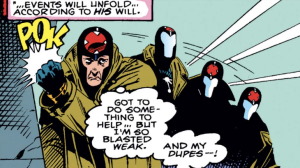 When X-Factor confronted the misguided Haven, the duplicates were of different minds on how to handle the situation. Some of them sided with X-Factor, while one Jamie believed in Haven's new age philosophies and thought that possibly Haven could cure them just like she had Wolfsbane from the effects of the Genoshan Mutate bonding process. During the battle between Haven’s followers and X-Factor, two versions of Jamie were busy fighting each other, both of them calling up more duplicates. Meanwhile, the virus-ridden Multiple Man noticed that he was no longer capable of creating fully functional copies. His duplicates were all faceless and directionless. Realizing that his time was up, he decided that his duplicate had been right in suggesting Haven as his last chance for survival. He slipped away 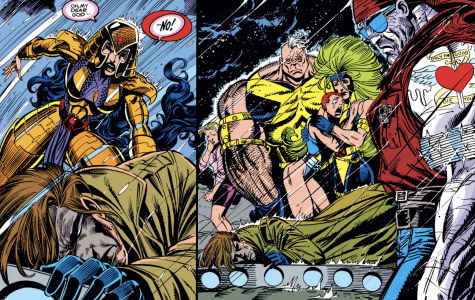 from the battle and sought out the villainess, who was only too eager to use her pocket reality powers to cure him and thus prove her power in front of X-Factor. Haven did her thing and proudly announced her success, though Multiple Man collapsed and was dead. After a split second of shock about her failure, Haven justified her failure that the Legacy Virus was a way of purging mutantkind of the weak, otherwise her new world order couldn’t happen. It was cold comfort for the surviving members of X-Factor, who were left to bury Jamie Madrox. [X-Factor (1st series) #98-100]

In the immediate aftermath, what happened to Jamie's two semi-independent dupes still fighting back in Haven's castle is unknown. As before, when one Jamie was seriously injured or killed, the other duplicates feel the pain too. However, this time, due to the additional stress of the Legacy infection and Haven’s powers, the psychic backlash was so great that a surviving Madrox was struck with amnesia. While X-Factor held a funeral for their supposedly deceased teammate, Jamie wandered around the streets, not recalling his former life. Not knowing why, he felt himself drawn to Washington and even visited X-Factor’s base, though unfortunately none of them were present. In another incident, he almost ran into Val Cooper. [X-Factor (1st series) #105, 111, 129]

Finally, Jamie was recognized by some federal agents, who took him in, claiming to have Jamie’s best interest at heart. In fact, they wanted to train him as some ultimate secret agent who could serve as a one-man army. Around that time, Multiple Man’s memory returned, but the feds decided to keep him away from X-Factor. Jamie didn’t like this one bit and was already thinking of escaping from the base where he was held, when a familiar face showed up – Havok. However, Havok had changed in the meantime,now leading the terrorist Brotherhood. T 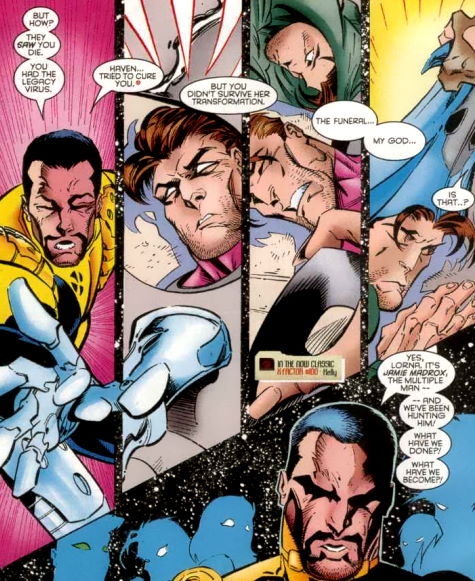 hough Jamie thanked him for bailing him out, he wanted to have no part in that.  Before leaving, Alex warned Jamie to be careful about X-Factor, as that group had changed too. Indeed, within a matter of days, the federal agents trumped up some charges against him and called in X-Factor to chase down a group of escaped mutants. Splitting up into several duplicates, each disguised with a different costume, Jamie tried to elude his pursuers, who didn’t recognize him at first. However, when all of them were caught and the masks were taken off, X-Factor was confronted with the hard truth. The government had used them as “hounds” to track down their friend. Naturally, they didn’t turn him over to the authorities, but the damage was done and Jamie no longer trusted them. It was no longer the team he knew, only Polaris and Forge still being among the line-up that he remembered. The new one contained known criminals like Mystique and Sabretooth. [X-Factor (1st series) #128-129] 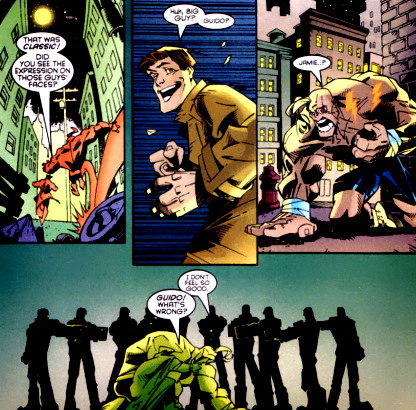 While both X-Factor and the Brotherhood made efforts to include him to their ranks, Jamie instead turned to his best friend Strong Guy, who was still recovering from a heart attack. When government agents arrived at the hospital to take him to a secret location, Jamie hijacked the ambulance, as he thought the agents wanted to use Guido just like him. However, the happy reunion of the two buddies was cut short when the authorities caught up with them. In the middle of the fight, Guido’s heart gave out again and, if not for the timely arrival of X-Factor, he might have died. Ashamed of his actions nearly having caused the death of his friend, Multiple Man left. [X-Factor (1st series) #132-133, 135]

In time, Havok’s terrorist activities were revealed as an undercover assignment and X-Factor was about to re-organize, independent from the government and without any villains forced upon them. Jamie considered rejoining the team, but first he arranged a meeting of Havok and Polaris for the distraught couple to sort out their differences. Unfortunately, on the day the members of the supposed new X-Factor assembled for their first meeting, team leader Havok was apparently killed in an explosion and the group disbanded before it had fully started. [X-Factor (1st series) #146, 149]

Afterwards, Jamie returned to Moira MacTaggert on Muir Island, where he was also reunited with Wolfsbane, who had been staying there ever after since quitting X-Factor. They even joined up with Strong Guy for a Halloween party, during which they also happened to stop some alien invasion. [X-Men Unlimited (1st series) #21] Several weeks later, Multiple Man was asked by Professor Xavier to join Forge in an undercover mission on Genosha. The two of them were supposed to observe how Magneto was handling the country and report any odd incidents. Such a time came when Magneto was temporarily off the island, yet another Magneto remained and tried to force the island’s different parties into peaceful coexistence. This one turned out to be Exodus in disguise. Together with some X-Men, the duo managed to convince Exodus that, though his idea was good, he couldn’t force people to accept each other. That would have meant peace at the cost of personal freedom. [Uncanny X-Men Annual ‘99]

Some months later, Jamie received a invitation to join another group. Banshee had started the X-Corps as a means to police the mutant population, by whatever means necessary. Several villains 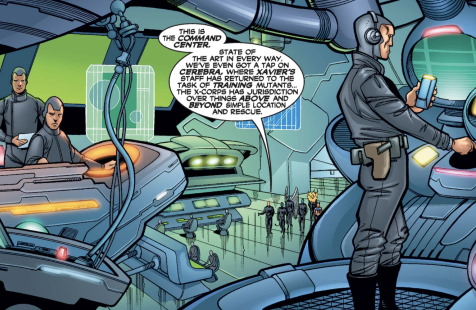 were forced to work off their crimes and serve the X-Corps and, other than actively taking part in the group’s mission, Jamie’s many duplicates were needed to provide the huge X-Corps building in Paris with a support staff. However, Mystique was able to infiltrate the group, and she and the involved villains tried to take over. Spread too thin among many duplicates, Jamie’s will power was weakened and quite many of him fell prey to a telepathic attack from Mastermind. The X-Men helped the loyal X-Corps members get the situation under control, but not before massive parts of Paris were destroyed by Mystique’s minions to make a statement about mutant superiority. [Uncanny X-Men (1st series) #401-406]

In the aftermath of that unpleasant incident, Jamie helped clear the city of debris. In an effort to atone for his involvement in the X-Corps debacle, Multiple Man joined the X-Corporation Paris, along with Monet St. Croix from X-Corps as well. [Uncanny X-Men (1st

series) #407] The X-Corporation functioned as an extension of the X-Men in Westchester, providing mutants all over the world with someone to turn to. One of their first missions led the new group into the Channel Tunnel, where a train carrying the mysterious Weapon XII had derailed. The genetically engineered entity was capable of infecting the minds of his victims, until they become part of him. In order to defeat Weapon XII, Xavier asked Multiple Man to provide him with enough duplicates for Xavier to make a similar effort, telepathically taking control of all of them. Weapon XII being temporarily distracted, and he was then deactivated by some of the other heroes present. [New X-Men (1st series) #128-130]

Further Adventures of Cyclops and Phoenix #3