Mystique didn’t intend to let the matter with Legion rest, but the problem “solved” itself, as he didn’t survive the events surrounding the Age of Apocalypse.  Instead, she found herself another 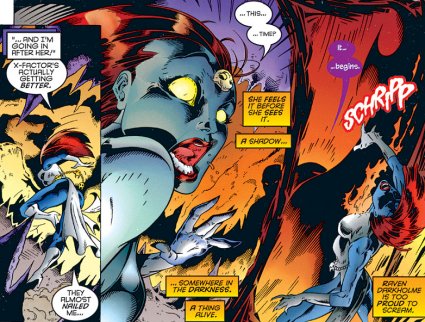 mission – planting a bomb at the Belle Fourche Dam in Colorado to flood a Sentinel plant. X-Factor had been tracking Mystique for ten days and finally caught up with her there. Val Cooper was close behind Mystique as she tried to make her escape, but a creature emerged from the shadows and attacked Mystique, leaving her badly injured. Healing quickly, Mystique tried to trick Forge by morphing into Val, but he wasn’t fooled and knocked her out. [X-Men Prime]

X-Factor pressed Mystique into service, forcing her to accompany them to Japan where they were searching for the missing Havok whose powers had gone wild. She proved to be useful, helping to defeat the foes they encountered,  as well as gathering information to aid in the search. 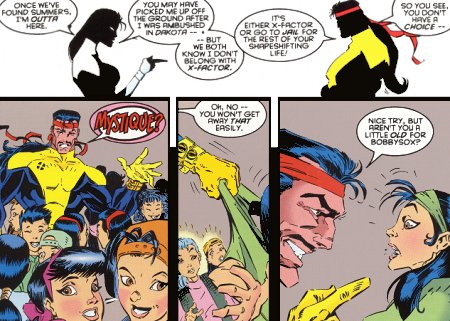 When Forge told her she could stay with X-Factor for good or go to jail, she tried to escape. The Maker caught her easily as he had implanted a tracker in her. The rest of the team was as unhappy with Mystique’s induction into the team as she was. [X-Factor (1st series) #112-113]

To keep Mystique from any further troublemaking, Forge implanted a device in her which discouraged her from shapeshifting into any member of the X-Men or X-Factor for more than 30 seconds by causing intense pain if she exceeded this time-limit. However, Mystique made it clear that she didn’t take kindly to being manipulated or ordered around and that she wouldn’t let the matter rest. [X-Factor(1st series) #114]

During her time with X-Factor, Mystique made several attempts to overcome the limits caused by these implants. She also started to take an interest in Forge - at times goading him, at other times 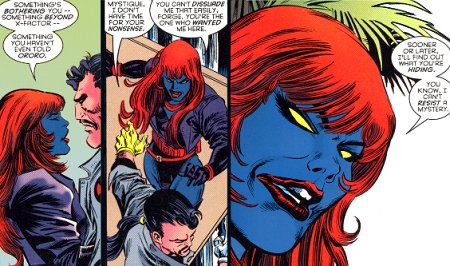 coming on to him. He was clearly eaten up by something regarding his past. Unlike Mystique, he didn’t believe that Destiny could have been referring to something as simple as mutual attraction when she had foretold that they’d end up together. After some goading, he confided to Mystique that he believed the Adversary – his nemesis – had been reborn. [X-Factor (1st series)#115-117]

As X-Factor prepared for the upcoming battle with the Adversary, the villain secretly took over Mystique and co-opted her shapeshifting powers and seductive behavior to distract Forge. The Adversary then made her powers go out of control and had her beg Forge to kill her. Forge recognized this as a trick and refused. The creature exited her body and in the coming battle, killed all of X-Factor with the exception of Forge. Forge was both saddened and furious. With the help of his mentor Nazé, Forge eventually chanced on the right method to beat his foe, by combining technology and magic. He forced the Adversary to return X-Factor to life. [X-Factor (1st series) #119-121]

Some time later, Val Cooper contacted X-Factor. Mystique answered the call disguised as Forge and strained against her implant to maintain his form. Believing she was talking to Forge Val, told “him” that they had information on the person who had tried to kill Mystique at the Belle Fourche Dam. Mystique stole a craft and journeyed to a secret government installation near the Canadian border to get revenge on the mysterious foe who had almost killed her. Naturally, X-Factor was hot on her heels. Raven discovered total carnage as her quarry had killed all the workers in the installation before he was surprised by Sabretooth. Mystique joined the scuffle and was injured in the process. they X-Factor arrived and joined the fray during which they learned that it wasn’t their soon-to-be teammate, Sabretooth, who was responsible for the wholesale slaughter but a killer Hound. This same creature had previously attacked Raven at the dam, as it went after her to finish the job it hadn't completed earlier. Polaris eventually took the Hound out after a prolonged battle. Later, it was revealed that Graydon Creed and the mysterious “Hound program” had been responsible for the attack on Mystique. [X-Factor (1st series) #122-123] Mystique was even more furious than the others that her “ex” Sabretooth had been forced onto the team. But neither of them was going anywhere. 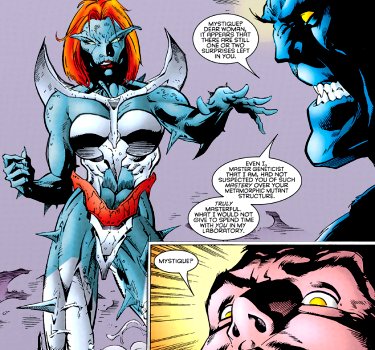 During the chaos caused by Onslaught, the Dark Beast deactivated Mystique’s and Sabretooth’s restraining devices and offered them their freedom if they killed Forge for him. They declined, intending to use the government organization for their own purposes instead. In the resulting battle, Mystique startled everyone present with the revelation that she could use her shapeshifting power to shift into inhuman shapes. [X-Factor(1st series) #125-126]

Shortly after this, Mystique and Sabretooth fled from X-Factor by faking their deaths, in order to complete some personal business. They infiltrated the SHIELD Helicarrier and gained access to a SHIELD morgue. There, they found the body they were searching for and, within it, a capsule containing information they needed. Destiny had once told Raven where this information would be found. Mystique promised the capsule would provide a way for them to get revenge on HYDRA – especially Catalyst for what he had once done to them and Destiny. The capsule provided a map to a HYDRA fortress and the pair intended to infiltrate it, despite the fact that they were being chased by an AIM high-up named Cypher. Caught in a war between AIM and HYDRA, the two were separated and Mystique ended up in the hands of Catalyst, who had survived his apparent death thanks to his mutant powers regenerating his body. Catching up with them, Sabretooth freed Mystique while Cypher flooded the room with poisonous gas. As the gas spread, the duo burned their way out of the room and then started killing every AIM agent in their path. While they searched for Cypher and Catalyst, they were having a confrontation of their own as Cypher was attempting to steal Catalyst’s data. When Catalyst saw Mystique and Sabretooth coming after him, he abandoned his work and made a strategic escape. Mystique followed him, morphing wings to fly. She left the furious Sabretooth behind to destroy the program and prevent Cypher from starting World War III. Meanwhile, Mystique chased Catalyst and faced him in the guise of Destiny. Shocked and rattled by the apparition, he fell to his death in a piranha-filled moat. Mystique then blackmailed Sabretooth into returning to X-Factor. He swore he’d get revenge on her for this someday. [Sabretooth & Mystique #1-4]

Young Trevor Chase, the grandson of a dear friend of Mystique’s – presumably Destiny - was beaten up by Friends of Humanity thugs on his way to a secret meeting with Raven Darkholme. Trevor had been meeting with Raven regularly for the past two years. The young boy was a reality-warping mutant and Raven had convinced him that no one would find out about his 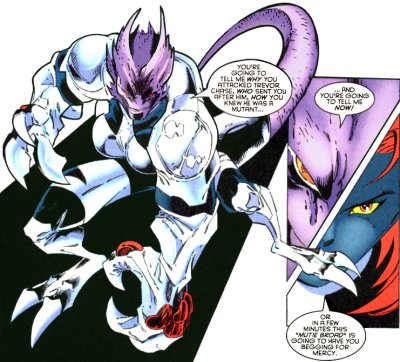 powers. As the thugs beat him, he wondered why Mystique had not come to save him. When Mystique learned that the boy was hospitalized, she escaped government custody to go find him. She infiltrated both the hospital staff and the police, then went to the FoH headquarters and terrorized the members by morphing into a flying monster and demanding to know who ordered the attack. After Forge took her back to X-Factor, she vowed to kill her “favorite” son, Graydon Creed – the Friends’ leader and now a presidential candidate- for this. [X-Factor (1st series) #127]

The government soon tried to coerce X-Factor into hunting down their former renegade teammate, Jamie Madrox. Mystique used her powers to buy the team and the real Madrox some time by impersonating Jamie while the others got the real Madrox to safety. She then pulled a fast 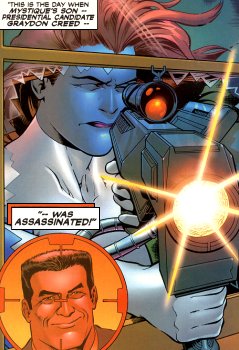 one on the agents and escaped.  She then met up with the ill Pyro at an abandoned church to discuss a sinister-sounding plan. X-Factor came to the conclusion that Mystique was out to assassinate her son, presidential candidate Graydon Creed. [X-Factor (1st series) #129]

Mystique had hatched an elaborate plan. At first, X-Factor believed that she was trying to murder her son but after Graydon was mysteriously killed on stage by an energy blast, she convinced them that she had actually been trying to save him from the assassin using a force field device. Her claims seemed truthful when a mysterious computer message appeared on their screens, announcing that Mystique would be next. The truth was that Mystique had been responsible for Graydon’s death but she did not remember killing him because her future self had taken over her body at that moment and activated the weapon that assassinated him. [X-Factor (1st series) #130, X-Men Forever (1st series) #1-2] 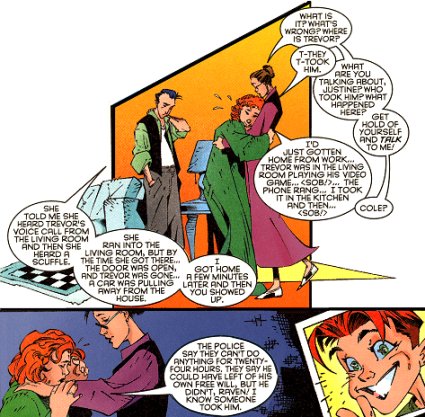 off to the home of Trevor Chase, where they learned that Trevor had been kidnapped. The people who took Trevor phoned and told Raven they wanted her dead and to leave the house immediately or they would kill the kid. She insisted that he be returned and then went outside and was shot at. Forge rescued her and promised to help her with her problems as he was impressed to finally see Mystique genuinely care about someone. In order to operate without further government control, the members of X-Factor faked their own deaths. [X-Factor (1st series) #132-133]

Shortly afterwards, the team infiltrated the home of Bowser – the government official who had been giving them so much trouble and found Trevor in his house, despite Bowser’s earlier denial. Trevor told Mystique that she had to escape, as "they" were coming after her. “They” turned out to be a couple of Hound-like monsters, which grabbed Bowser and dragged him away, saying that Mystique was next. She comforted Trevor and he revealed that he knew of her true identity, muttering evilly to himself that "you're next." Mystique spent some quality time with Trevor before returning to X-Factor. The boy secretly blamed X-Factor for keeping Mystique away from him and used his reality-warping powers, which he focused through his government-conspiracy video game, to try and kill them. [X-Factor (1st series) #134-135] 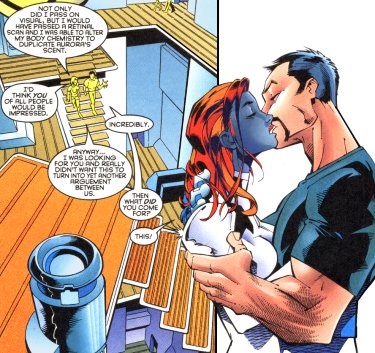 Forge and Mystique finally started to admit their feelings to each other. There wasn’t much time for romance, though, as Sabretooth turned out to be a sleeper agent planted by the government to destroy the team. Val Cooper’s warning came too late and every member of the team was grievously injured by Sabretooth. Despite Val doing her best to keep the members out of the government’s clutches (by handing them over to then-terrorist Havok) Mystique blamed Val for this debacle and threatened her before slipping away. [X-Factor (1st series) #136-137] 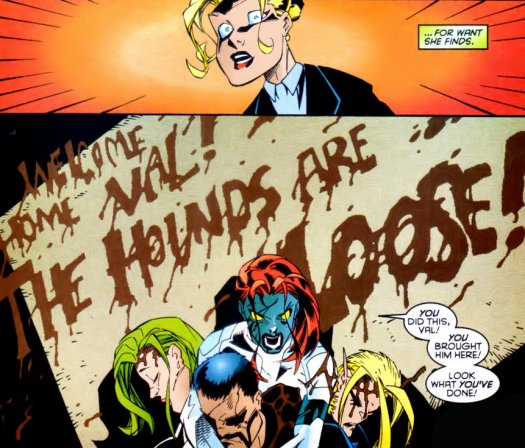