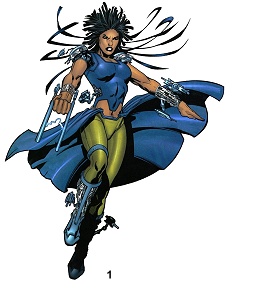 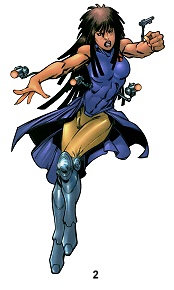 1) After being transformed into an Omega Sentinel, Karima wore an outfit that consisted of a blue tank top that was cut in a stylized fashion at the mid-riff, pants green-gold toned pants and a “half-skirt” in the same shade as her top. The tank top was connected to her waist by silver hoops. Silver boots, leg bands and a thin silver belt completed this look. [Excalibur (3rd series) #3]

2) Karima slightly modified her first outfit after several months in Genosha. The tank top was replaced with a purple hued, sleeveless top that rose to her neckline. A traditional X symbol adorned the left side of her chest. Her half-skirt was now a matching shade of purple and her pants golden brown. Her silver boots now included round knee guards. [Excalibur (3rd series) #10] 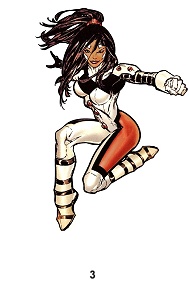 3) After joining the X-Men, Karima adopted a very different look. This look featured a form-fitting body suit in black and white, with broad red stripes that ran down the sides from her underarms to her mid thigh. The white, heart-shaped bodice sometimes had several red-accented “rivets” running down her mid-section. Around her neck were armored white bands. Her arms were covered by black ribbed sleeves. White armored gauntlets with small red-accented “rivets” adorned her forearms. She also wore matching shoulder armor. Karima’s face had matching white markings. Her hair was held in place or in ponytails by white adornments that looked similar to the “rivets” on her costume. [X-Men (2nd series) #189]

-) When Karima rejoined the X-Men after being possessed by Arkea, she wore civillian clothing, often consisting of a tank top, dark jeans and a holster for her gun.