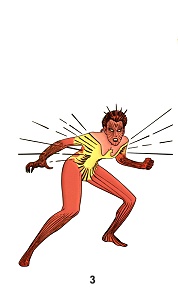 1) In her future timeline, Rachel was kidnapped and programmed into serving as a mutant tracking “Hound”. The spiked leather outfit (originally colored pitch-black) was the regular outfit for these hounds and was first seen in Rachel’s memories. Along with the conditioning Rachel received so-called facial “Hound marks,” though later on she used her powers to mask the scars/tattoos. However, when her concentration slipped they were visible. [Uncanny X-Men (1st series) #189]

3) It was only after she decided to take on the Phoenix moniker, in honor of her mother, that she started to wear a costume to match the name. [Uncanny X-Men (1st series) #199, Uncanny X-Men Annual #9] 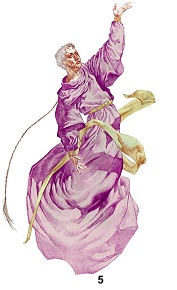 5) At one point Rachel entered the timestream and wound up 2000 years in the future. There she grew old and founded the Askani Sisterhood under the name Mother Askani. Rachel was again wearing her Hound costume, but on top of it a purple robe. [Adventures of Cyclops and Phoenix #1]

6) Adopting the name Marvel Girl to honor her mother, Rachel now also wears an outfit that is a homage to one of Jean Grey’s Marvel Girl outfits: a green, tight miniskirt and a green and yellow T-shirt, leaving a bare midriff, combined with yellow boots and yellow glasses reminiscent of Jean’s yellow pointy mask. Rachel has, however, admitted that she isn’t all that comfortable in that outfit, which isn’t her usually style at all. When she uses a lot of her power, her shadow form reappears along with a tiny golden Phoenix symbol over her left eye. [Uncanny X-Men (1st series) #444]

7) After her uniform was destroyed dealing with the Blade of the Phoenix, Rachel conjured up a new costume. It is primarily a set of black leather pants and a tanktop, exposing her arms and bare midriff. The top has a stylized orange flame design covering most of the front, and similar orange cuts adorn the sides of her hips. She also wears black boots and armbands, and a brown 'X' belt around her waist. [Uncanny X-Men (1st series) #481] 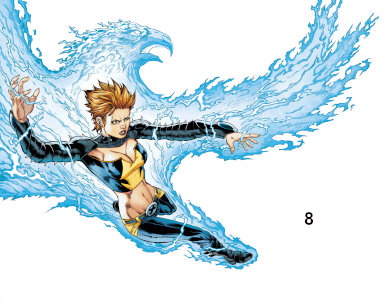 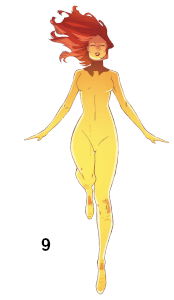 8) Rachel’s connection to Korvus and his aspect of the Phoenix Force helped make her more aggressive. She modified her costume with leather arm bands and a neckline, with spikes on them like her Hound uniform. [X-Men: Kingbreaker #1]

9) As Revenant, Rachel became a spectral plasma entity that roughly resembled the Phoenix. Made of semi-transparent energy, her “costume” appeared as a yellow-orange bodysuit with a Phoenix head towards the top, cutting into a black neckline. [X-Men: Legacy (1st series) #245] 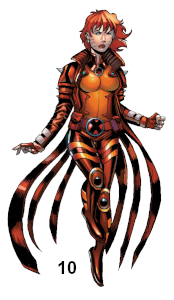 10) At the Jean Grey School, Rachel Grey wore a red costume with an orange centerpiece covered by overlapping straps, partially resembling the old Phoenix insignia. Her leggings were red leather with orange stripes on the thighs. She also wore a red trenchcoat with spikes reminiscent of her Hound costume and a tail that split into strips, evoking a bird’s wings. [Wolverine and the X-Men (1st series) #1]

11) Rachel would later abandon the trenchcoat from her costume. The arm spikes from that coat were now found on light armor for her upper sleeves. [X-Men (4th series) #7]

12) As Prestige, Rachel took on a black costume with a red plate down her front. She wore red gloves, thigh-high boots, and a red and yellow cape held to her chest by golden clasps. Rachel also wore a small mask resembling raccoon or goggle trim around her eyes. [X-Men: Gold #1] 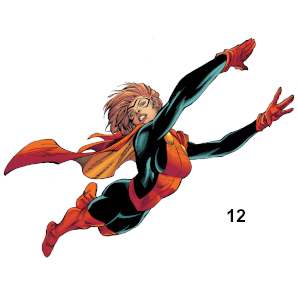 13) When her Hound marks resurfaced, Prestige altered her costume slightly to reflect that. Her basic Prestige uniform remained, but with the mask and cape removed. She added some spikes to the arms and legs to evoke her previous Hound attire. [X-Men: Gold #21]

-) After shaking Mesmero’s influence, Rachel would alternately return to her previous Prestige costume or her red spiky costume from the Jean Grey School era.

14) With X-Factor Investigations, Rachel wore a basic red jumpsuit with boots and light collar armor. Her jacket had the white X-Factor symbol on each shoulder. [X-Factor (4th series) #2]