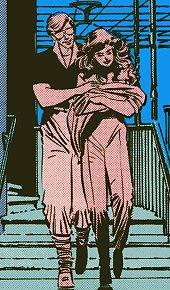 Rachel was born in another reality, the future of Earth-811, colloquially referred to as Days of Future Past. She considers herself the daughter of Cyclops and Jean Grey, though it was never fully confirmed if this was actually the case or if her reality's Jean too had been replaced by the Phoenix Force for a while. (For a time in the present era, Rachel's memories were distorted by the Phoenix Force, leaving her with conflicting recollections.) Growing up, Rachel was close friends with Franklin Richards of the Fantastic Four's family, even though he was five years older than her, and they often played together. She affectionately nicknamed him "Scrapper". As her power manifested, Rachel joined the New Mutants along with Frank and several others under Banshee's command. [Uncanny X-Men (1st series) #199, New Mutants Annual #6] 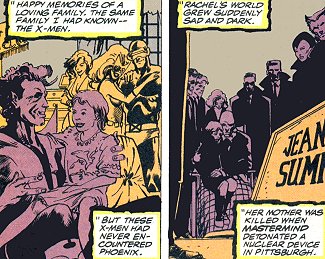 When she was in her early teens, Rachel’s mother was killed in a nuclear explosion caused by Mastermind in Pittsburgh. Times were also harsh for mutantkind in general, however, as prominent politicians led the government to decide to outlaw mutants as a whole and restarted the Sentinel program. The Mutant Registration Act came with a wide mandate to override mutant civil rights, for those were reserved for "humans". Later, the Sentinels concluded that the best way to deal with the mutant threat was to take over the whole country, removing all nuance from the Act's implementation.

At some point, Xavier’s school was attacked by the military and many present there died. 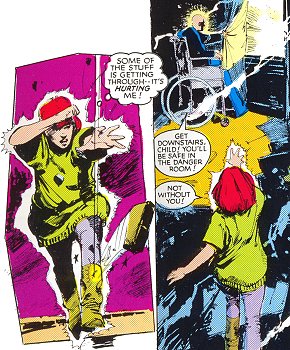 As one of the few survivors, Rachel was brought to the labs of Ahab, the man in charge of the government’s anti-mutant programs. For months Rachel was drugged, hypnotized and brainwashed. Finally, she gave in, becoming the prototype of Ahab’s Hounds, mutants hunting other mutants for humanity. 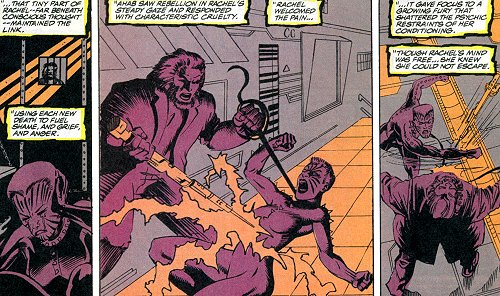 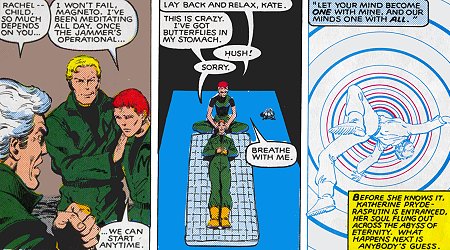 In the following months, Rachel was able to resist all attempts of a second re-programming into a Hound and eventually she was brought to the same containment camp where the remaining X-Men had been sent. There, Rachel had a bittersweet reunion with friends like Wolverine, Storm, Magneto, Colossus, Kate Pryde, and Franklin Richards. She learned that, in her absence, most other super-beings - mutant or not - had either been killed or imprisoned. [Excalibur (1st series) #52]

In the camp, her reunion with Franklin Richards led to a romantic relationship. Together, they and the X-Men came up with a way to neutralize their power-inhibiting collars. This allowed Rachel to send the consciousness of the adult Katherine Pryde back in time to take over young Kitty’s body. They intended to warn the X-Men about their dark future and ask for their help in preventing it by stopping the assassination of Senator Robert Kelly, a key event that set the Mutant Registration Act in motion. As a distraction from Rachel’s actions, her teammates launched an attack on the Sentinels’ main operation base, though they all were killed. However, they did at least provide Rachel with enough time to ensure the safe return of Kate’s consciousness. [Uncanny X-Men (1st series) #141-142]

Even though Kate and the X-Men had succeeded in altering the past, the future was left unchanged. In a safe hideout, Rachel projected her own astral self into the past to investigate where their plan to alter the course of history had failed. Floating over New York, she discovered that, by accident, she had sent Kate cross-time, into another timeline’s past. As such, they had indeed changed one future, but not their own.

When Rachel’s astral self prepared to return to the future, she drew the attention of the Phoenix Force, which was just passing by. At first mistaking her for the mind of Jean Grey, the Force soon 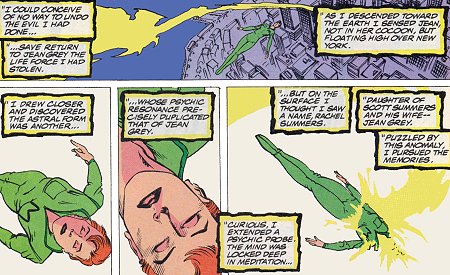 discovered that it had stumbled upon the consciousness of a future daughter of Jean, with a similar psychic resonance. Amazed by this timely anomaly, the Force probed deeper and learned all about the life of pain and misery that Rachel had led. Impressed that the passionate Rachel had never given up on life despite all the cruel things she had experienced in her young life, the Force decided to follow Rachel through the timestream. 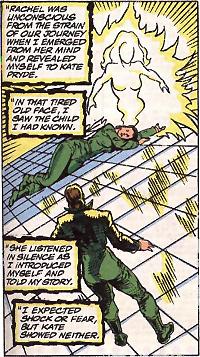 Back in the future, Rachel passed out from the strain of her journey. The Phoenix Force rose from her unconscious body, revealing itself to Kate Pryde. Having lost her friends and her family, Kate said that she had nothing left to live for, but she asked the Force to give Rachel the chance for a fresh start. The Force agreed and they devised a plan to cover for Rachel’s eventual departure. The next day, after Rachel had recovered, she and Kate broke into the facilities of Project Nimrod, a new Super Sentinel. Once inside, they planted a nuclear bomb. It was a suicide mission and, with the blast atomizing everything within a square mile, nobody would expect Rachel to survive. However, shortly before the explosion, Kate said the codeword “Dark Phoenix,” which was the sign for the Force to supercharge Rachel’s power to send her back in time - physically. [Excalibur (1st series) #52]