Where the main reality’s Goblyn Queen failed, her counterpart from What if (2nd series) #6 succeeded – for in this reality, S’ym got hold of Illyana Rasputin’s soulsword and struck a deadly 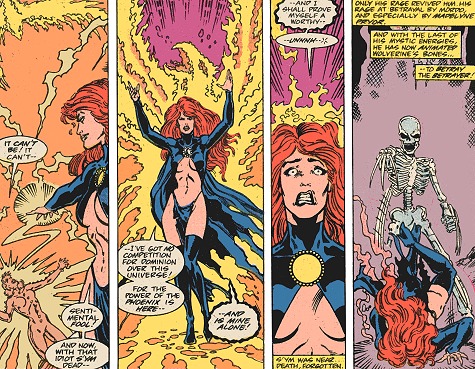 alliance with Madelyne. Together, they defeated and killed all members of the X-Men and X-Factor, except for Wolverine, whom they turned into a pet creature. By killing baby Nathan Christopher with the soulsword,  Madelyne and S’ym permanently opened the portal between Limbo and Earth, and soon the entire planet was taken over by demons. Led by Dr. Strange, the few remaining superbeings tried to summon the Phoenix Force through Rachel Summers, but they were betrayed by Strange’s archenemy, Baron Mordo, who revealed the location of the heroes’ hideout to the Goblyn Queen’s forces. In the resulting battle, S’ym, Wolverine and Mordo were killed, but Madelyne couldn’t care less, for she successfully managed to wrest control over the Phoenix Force from Rachel. However, her triumph was brief, as S’ym’s ghost, feeling betrayed by his ally, reanimated Wolverine’s adamantium skeleton and killed her from behind. Rachel took then took the Force back, and used it to cleanse Earth of all demonic influence.

In the reality shown in What if (2nd series) #74, Cyclops and Havok had never escaped Mr. 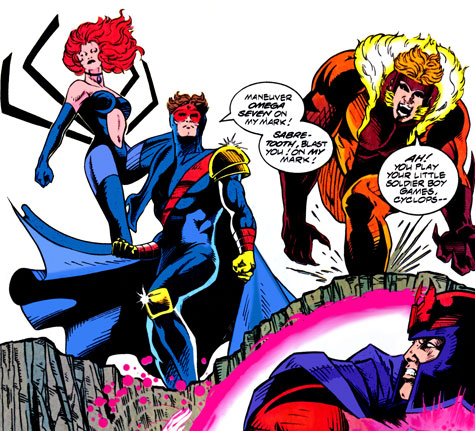 Sinister’s clutches. To bind them more tightly to his cause, Sinister created his own team of “X-Men,” among them Madelyne. This version of Jean’s clone, however, had never woken up on her own, which is why Sinister simply had her be possessed by the psychic entity, Malice. Cyclops and Malice had a relationship and Malice seemed to truly have feelings for Scott, but once he met Jean Grey he instantly became attracted to her. After Sinister apparently died, Cyclops and Havok joined Xavier’s X-Men, presumably as undercover agents. It is unclear what became of Madelyne. 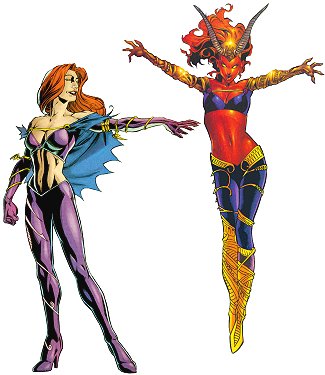 Mutant X universe and, more or less, he lived the life of the main universe’s version of Cyclops. He was a founding member and field leader of the X-Men and, some time after the apparent death of Jean Grey, Havok’s teammate and lover, he met Madelyne Pryor in Alaska. They fell in love with each other, eventually married and had a son they named Scotty, after Alex‘s missing brother. After the boy was abducted by the demons S’ym and N’astirh during this reality’s version of Inferno, Madelyne apparently struck some sort of deal with them, that not only saved her son and the entire planet, but also brought forth her previously unseen telekinetic powers. Calling herself Marvel Woman, she joined Havok’s team, the Six, as an active member. As time went by, Madelyne slowly succumbed to her darker side and became the Goblyn Queen. As such, she manipulated her entire team, until little Scotty used his developing psychic powers to purge the demonic Goblyn Force that was influencing Madelyne, who vanished in the process. Much later, she re-appeared when the Beyonder joined energies with the Goblyn Force and nearly killed every hero on Earth. Transforming into pure energy, Havok took himself and the Beyonder to another plane of existence, effectively freeing Madelyne from the evil influence.

In the future world referred to as Earth X the powerless middle-aged dumpy woman who lived with Wolverine in an unhappy relationship shocked him when she walked out on him by announcing suddenly that she was not Jean Grey as he had always thought, but Madelyne Pryor and that she had fooled him all the time. Later though, as they met again at a royal wedding, she revealed that she was in fact Jean and only said that to spite him. However, there was another Jean - the Phoenix - in the realm of the dead and perhaps the living Jean lied a second time, and actually was Madelyne, though it doesn’t appear very likely. Other than that, it was mentioned that Nate Grey died several years earlier, while protecting Madelyne. If she still had her powers, there is a big likelihood she was killed like every other telepath when the new Red Skull rose to power.

On Earth 998, at the end of the 19th century, Madelyne Pryor was a great warrior queen, who ruled the British Empire and through it most of the world. When she died of old age, she vowed to rise like a phoenix from the ashes and return. However, she remained dead and another woman claiming to be Madelyne (who actually was an evil, alternate version of Jean Grey) took her role. It is unclear if the original Queen Madelyne truly was an alternate of Madelyne Pryor and whether this is actually possible (given her convoluted origin), yet the name, not to mention the fact that a Jean Grey could impersonate her, seem to hint at more than a mere coincidence.

Ten to fifteen years in the future, the X-Men faced their End when Madelyne Pryor returned to Xavier’s school alongside a group of Warskrulls intent on destroying the Institute. It is unclear how 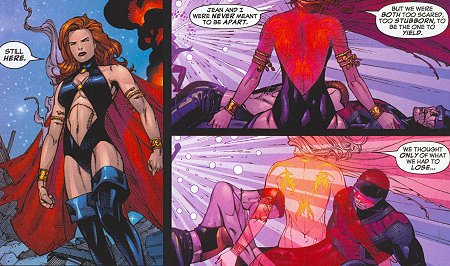 she came to be connected to the Skrulls or even came back to life, though one can assume that Sinister had his hands in this. Madelyne fought and killed the X-Man Dust and took her place, hiding her true identity behind the other woman’s burqa. While actually intending to take her revenge on her former husband, Cyclops, Madelyne instead found herself in situations where she kept helping and saving him. During the X-Men’s battle with Cassandra Nova on Chandilar, the near death of her son, Cable, forced Maddie to show who she truly was, something Cyclops had already known - and he took the opportunity to apologize for all the pain he caused her. Against all odds, Madelyne was the only person who managed to stand against Cassandra and finally realized who she truly was - the part of Jean Grey that always loved Scott more than life. With that realization, the two women - Phoenix and Madelyne - became one, as Maddie uses her last strength to heal the mortally injured Phoenix and Scott. Madelyne/Phoenix, along with several other X-Men, then recreated the “Tree of Life” from the Quabala and presumably transcended this plane of existence.

In the Battleworld domain that showed what would have happened if the X-Men lost Inferno, 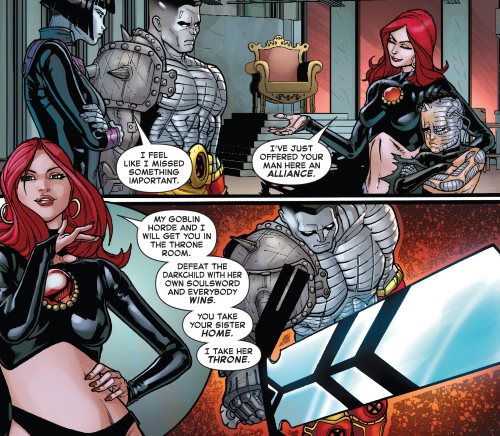 Madelyne and the Darkchilde were locked in battle over New York. A magical shield had been erected over Manhattan trapping the two inside, along with the demonic influence of Limbo. Madelyne had originally been given the title of Baroness of the domain by Doom, who had created Battleworld. When she has trapped in Manhattan it was Cyclops who became Baron instead, and he used the X-Men to keep Madelyne and her forces inside the shield. Madelyne wasn't alone though as she had Alex Summers, the Goblyn Prince by her side as well her son Nathan with her, who was now a young boy.

Colossus, Darkchilde's brother, was adamant that his sister could be saved and every year he travelled into Manhattan to save her. On his final attempt he struck a deal with Madelyne, who wanted to take control of Manhattan from Darkchilde. Having stolen Darkchilde's soulsword a few years before, she gave it Colossus and sent him to confront his sister. Her plan worked and Colossus was forced to kill his sister, leaving Madeylne to take over the role as ruler of Limbo. In the carnage the shield around Manhattan fell and the demons escaped their confinement, spelling the end of the X-Men. Madelyne just stood back and watched as her power grew larger and her enemies were slaughtered.

In a surprising turn of events, Madelyne was one of the few inhabitants of Battleworld to make it 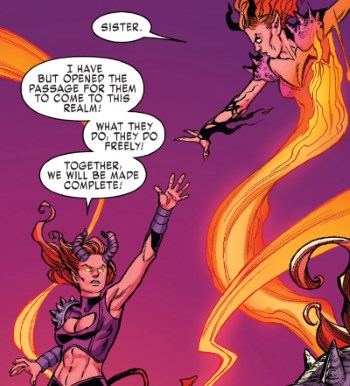 out when it was destroyed and a new universe was created in its place. Darkchilde had previously coopted Nightcrawler and turned him into a mindless dragon-like creature. Madelyne rescued him and used his teleportation ability to slip between the cracks of reality and she found herself on the newly created Earth. Manipulating the younger version of Hank McCoy, she used him to open a portal that brought more demonic X-Men from various realities to Earth. With the "Hex Men" at her side she began casting a spell that would bring the spirits of alternate versions of herself to Earth. Together they would be unstoppable, but one of the Hex Men had second thoughts and disrupted the spell, causing Madelyne to get trapped somewhere on the spirit world.