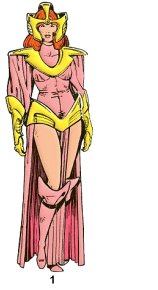 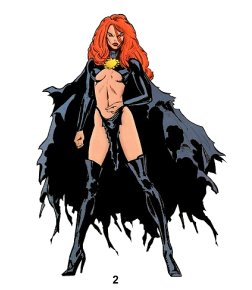 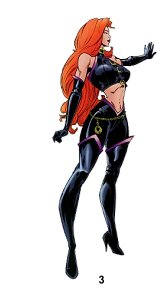 1) When she came in contact with a magical fountain, Madelyne was temporarily transformed into Anodyne. In that form, she was in peak human condition, several inches taller and had healing powers. [X-Men and Alpha Flight (1st series) #1]

2) Limbo demons used Madelyne’s hatred for the husband who had abandoned her to infuse her with demonic essence. With the help of their tainted magic, she fully accessed the abilities hidden in her genetic code and became the Goblyn Queen. The outfit was first see in a dream sequence, but soon she started to wear it in reality as well. [Uncanny X-Men (1st series) #234, Inferno]

3) While amnesiac, Madelyne was found by Selene, who took her under her wing. From the ancient villainess, she received a form-fitting costume, though often wore a leather jacket over it. [X-Man #16] 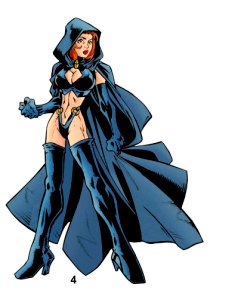 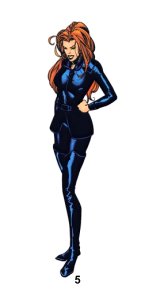 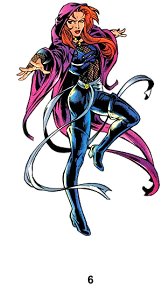 4) Madelyne wore the classic Hellfire Club dress code when she had to battle the London Club’s Scribe to prove her being worthy to join the Inner Circle. [X-Man #23] She wore a similar, revealing uniform when she later kidnapped her son, Cable. Upon taking him to the astral plane, her outfit changed into a black bodysuit with a purple vest. [Cable (2nd series) #44]

-) A few weeks later, she wore a costume that seemed like a mix of these two. It had Hellfire Club insignia but also contained some purple elements. [Cable (2nd series) #50]

5) By the time Madelyne returned to X-Man, she had gone back to her earlier look, though the jacket was now a permanent fixture and it seemed that she was wearing a different top underneath. [X-Man #38]

6) When the Psi-War temporarily negated all psi-powers, Madelyne vanished for a time. When she rematerialized, she had adopted a new look with fishnet attributes. The cape was not worn the whole time and changed color in several appearances. [X-Man #42]

-) Upon her return as a psionic ghost trying to find herself a powerful enough body to inhabit, Madelyne was wearing skin-tight black leather pants, a corset, short gloves and a dark bolero jacket trimmed with white fur. With this look, Maddie wore her hair in a chignon and a choker around her neck. [Uncanny X-Men (1st series) #503]