The birth history of Pietro Maximoff is fraught with confusion. Son of the crusading witch Natalya Maximoff and an unknown father, Pietro and his twin sister Wanda were born into the Romani culture somewhere in Eastern Europe, possibly Transia or neighboring Serbia. Natalya fought the forces of evil as the Scarlet Witch and regularly left her children in the care of her brother and his wife, Django and Marya Maximoff.

The High Evolutionary, a mad geneticist from Transia's Mount Wundagore, wanted to unlock the secret of humanity's genetic potential, and unleashed his bestial Knights of Wundagore to scour the countryside for newborn children to use as raw material in his experiments. A craven priest in Serbia directed the Evolutionary's horde towards the children of Natalya, thinking the children of a witch might have greater potential. Pietro and Wanda were stolen away into the night. When Natalya heard of her children's abduction, she stormed Mount Wundagore and confronted the High Evolutionary and his Knights in a fierce battle. The outcome of the battle is uncertain, but Natalya failed to recover her twins and reportedly perished in an unrelated incident with the twins' father.

The Evolutionary went to work on the twins, altering their genetic structure to induce the development of superhuman powers. He was reportedly unsatisfied with the results, however, 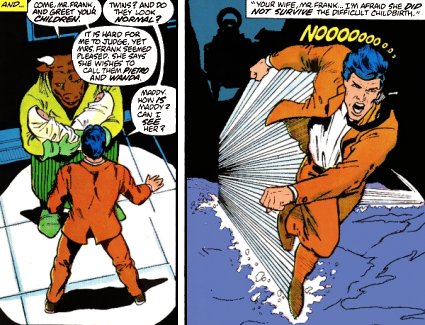 able to extrapolate how his work would present itself once the infants reached adulthood. Robert and the pregnant Madeline Frank (the heroes of World War II known as Whizzer and Miss America) did appear at Mount Wundagore around the same time. However, both Madeline and her child died in labor attended by the cow-woman, Bova. As the High Evolutionary was done with his experiments, Bova presented Pietro and Wanda to Bob Frank as if they were his children, hoping a “white lie” would sooth the man's anguish over the death of his wife. Instead, the broken Whizzer raced off into the night alone, abandoning "his" children and leading to confusion over their true origins years later.

Around the same time, a woman known as Magda may or may not have come to Wundagore while fleeing her mutant husband, Magnus. For years, Bova and the High Evolutionary stuck to a story that Magda gave birth to the twins that night. Why they chose this lie and whether Magda was ever truly on Wundagore or pregnant remained uncertain. Apparently impressed with the courage Natalya demonstrated against the Knights of Wundagore, the High Evolutionary eventually decided to return the twins to the Romani. He arranged to mask his work on their genetic codes by causing the twins to "read" as mutants to any contemporary technology. The Evolutionary returned them to their aunt and uncle, although he claimed ignorance of their relation when questioned about his actions. The Maximoffs had recently lost their biological children, Ana and Mateo, and were overjoyed with the return of the twins. With Natalya dead as well, Django and Marya raised Pietro and Wanda as their own children instead of explaining the truth about their lost mother.

Pietro and Wanda led a peaceful life with their gypsy parents, their father often carving them marionettes to play with. As the Maximoffs were well accepted within the gypsy community, and 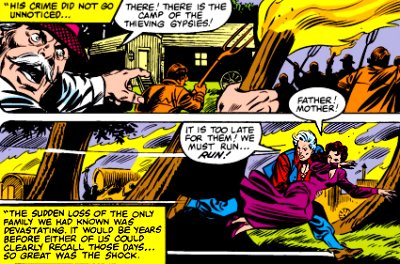 nothing seemed to change when they began to develop special abilities as teenagers. However, the need to feed his family forced Django to steal, which led to some angry villagers chasing him and burning down the entire gypsy camp. While their mother seemingly perished within the flames, Pietro and Wanda would flee. The shock of seeing everything they held dear go down in flames was too much and it would be years before either of them could fully recall those days. [all from Avengers (1st series) #185-186, 234, Giant Size Avengers #1, Uncanny X-Men Annual #12, Web of Spider-Man Annual #4, Uncanny Avengers (2nd series) #4-5, and Scarlet Witch (2nd series) #11-12]

Pietro only remembered that his father had told him always to watch over his sister and he did as best he could.  Over the next few years, they took whatever shelter they could and Pietro used 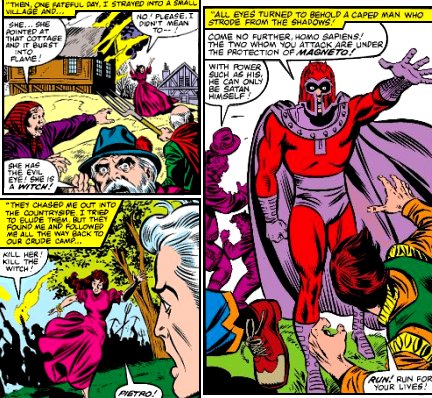 his speed to catch them some rabbits as food. At one point, they were sought out by Charles Xavier, who offered them special training at his school in America, but Pietro refused, thinking that they could master their powers on their own. One fateful day, Wanda strolled into a nearby village and, by accident, caused a barn to catch fire with one of her unpredictable hexes. She was thought to be a witch and would have been burned at the stake had it not been for the Magneto, who rescued her from the mob. [Professor Xavier and the X-Men #4, Avengers (1st series) #234, X-Men (1st series) #4]

Magneto brought Pietro and Wanda to live with him on Asteroid M, his orbital base, and began training the young mutants as part of his Brotherhood of Evil Mutants, christening them Quicksilver and the Scarlet Witch. The twins only stayed because they were indebted to him, as 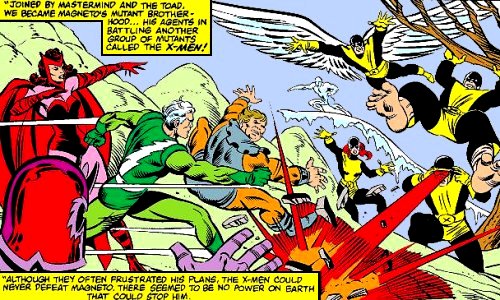 Magneto had saved Wanda's life, and were forced into performing many terrorist actions they despised taking part in. Both Mastermind and the Toad took an unhealthy interest in Wanda, but time and again Pietro protected her from them. Several times, the Brotherhood opposed the X-Men when both groups tried to recruit some thus-far unknown mutants. Pietro and his sister were finally freed when Magneto was carried off to another world by the enigmatic, alien Stranger. Although they were once more offered the chance to join the X-Men, the siblings decided to take some time for themselves and returned to Transia. [X-Men (1st series) #4-7, 11]

Shortly thereafter, Pietro saw a newspaper article proclaiming the Avengers were looking for new members and he convinced Wanda they should audition for the group. They succeeded and 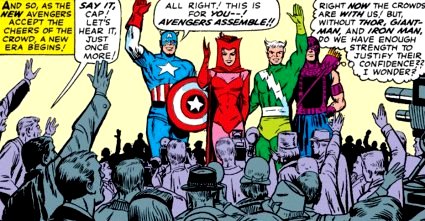 were inducted into the Avengers as replacements for Giant Man and the Wasp. Pietro and Wanda happened to be the first mutants to join the group and, along with Hawkeye, the first reformed villains to be accepted into it. Led by Captain America, this incarnation of the Avengers was referred to as "Cap's Kooky Quartet" and was the first major upheaval of the Avengers roster in history. [Avengers (1st series) #16] The early days of the group were filled with in-fighting, especially with clashing hot-heads Quicksilver and Hawkeye, but they soon evolved into one of the most tight-knit teams of Avengers to date. What they lacked in power, they made up for with teamwork.

At one point in their membership, Wanda and Pietro took a leave of absence to return to Wundagore, as they both felt their powers fading. Apparently, some strange element in their native area revitalized their powers, though the diathermic treatments of a local scientist too had some influence in their recovery. [Avengers (1st series) #32] Almost back at full strength, Wanda and Pietro once more were contacted by the X-Men, who needed more firepower against the imminent threat of Factor Three. However, like before, the twins refused, reasoning that, if they returned to the States, it would be as Avengers. [X-Men (1st series) #27]

Just when they were about to return to America, an alien craft landed in Transia and the aliens captured the two mutants. Ixar, a shapeshifter, then journeyed to Avengers mansion, posing as 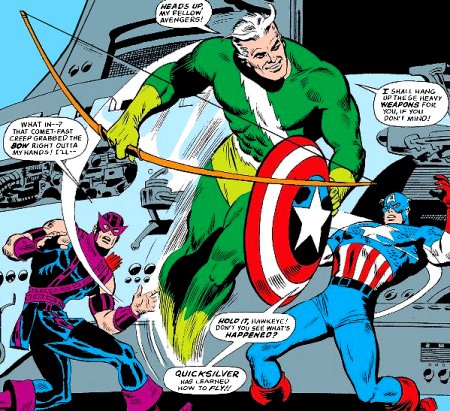 Wanda, and lured the heroes into the craft as well. Despite Captain America suspecting a trap, the Avengers were nearly overpowered but, in the end, they managed to drive the aliens away from Earth. [Avengers (1st series) #36-37] After being freed, Quicksilver  and the Scarlet Witch officially rejoined the ever-changing roster of Avengers, including new and returning allies, like Goliath, the Wasp and Hercules.

Apparently, the visit to Transia had not only restored Pietro’s powers, but pushed him to develop them in new ways as he soon demonstated in a training session. While trying to outrun a hurtling bullet, he discovered that by vibrating his feet really fast, he could fly for short distances. Quicksilver immediately used this new power to surprise Hawkeye and Captain America, who were training in the next room. [Avengers (1st series) #43]