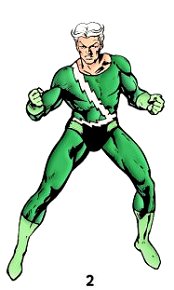 Quicksilver's first costume was a green bodysuit with a white lightning bolt that stretched from his right shoulder to his left hip where it met a white belt in the same style. At the shoulders there were simple epaulets. He also wore light green gloves, briefs and shoes that were reminiscent of Peter Pan. [X-Men (1st series) #4]

2) By the time he joined the Avengers, Pietro’s costume had been slightly simplified. The epaulets were now gone and the gloves and boots were more standard issue hero garb. The neckline was also adjusted to have a more rounded look around the neck. [X-Men (1st series) #11]

3) He later modified the costume's color scheme, changing it to a pale blue overall. The lightning bolt and belt were still white, but now so were his gloves and boots. The trunk of the costume varied in color and was either black, dark blue or pale blue like the rest of his outfit. This would be the costume that Pietro wore for the longest time and as such is the one he would become most associated with. [Avengers (1st series) #75]

4) When X-Factor opted for an official team look, the government provided Pietro with a team uniform equipped with a myriad of clunky accessories such as a visor, belts, armored shoulder pads and more. Once he ran, the excess decorations fell away to reveal a sleek and simple costume consisting of a navy blue body suit with a yellow X across the chest and mid-length yellow gloves and boots. This was a short-lived outfit since Pietro left X-Factor shortly after. [X-Factor (1st series) #93]

5) Quicksilver's next costume had a new stylized lightning design. The body suit was silver on the left side and midnight blue on the right, separated by a lightning bolt pattern that began at his left shoulder and traveled diagonally down along his right leg. His boots and gloves were the opposite color of his body suit's design, with a midnight blue glove and boot on the left and a silver boot and glove on the right. The costume also had a blue lightning bolt circling his upper thigh and forearm on the silver side. Variations of this costume covered his neck or left it exposed, were colored gray instead of blue and had arrows on his gloves and boots. [Avengers: The Crossing]

6) Pietro later adopted a new costume with a raised collar. He now wore a thick white lightning bolt crossing down from his left shoulder, separating a light blue color on his right side and a dark blue on his left. His gloves and boots were both white, marked by a lightning cut on the borders. During his fall from grace after M-Day, Pietro would wear increasingly ragged versions of this costume. [Avengers (3rd series) #38] 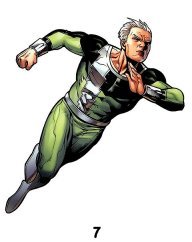 7) When he regained his speed, Quicksilver reassumed a costumed look based on his original uniform. An updated and streamlined version of his first green outfit, this costume typically included a large black (or extremely dark green) collar piece, a silver lightning bolt from his right shoulder connecting to a silver belt, and silver boots and wristbands. However the details of this costume changed frequently, such as the color of the gloves and boots, having the lightning bolt run down the center of his chest, removing the belt, etc. [Mighty Avengers (1st series) #22]

8) Like every member of the all-new X-Factor, Quicksilver adopted the officially-sponsored uniform of Serval Industries while with the team. This costume had the SI logo of a cat  crossing a plain on the left side of his chest. The primarily yellow color was accented  by a gray/purple segment beginning under the cat and extending over his right arm for asymmetrically colored sleeves. It also had colored kneepads and lamps on his forearms that produced a stream of light as he ran. [All-New X-Factor #2]

9) When he joined the Unity Squad, Pietro adopted a new suit that could only have been inspired by Tron. Although primarily silver, the suit seemed to glow blue in the presence of several lights on the costume, producing a "blue streak" as he ran. His goggles also made it appear as if his eyes were glowing blue. [Uncanny Avengers (2nd series) #1]

10) For his next costume, Quicksilver changed to a largely purple bodysuit with open hands and running shoes. A silver block runs from his chest and down the inside of his thighs, with three purple arrows in the center representing a "Fast Forward" sign. [Uncanny Avengers (3rd series) #1]