Russel "Rusty" Collins was a farm boy from Iowa who dreamed about seeing the world outside of the farms he grew up on. His father was a sailor who died in the war, and his mother died soon afterwards. Rusty grew up being raised by his uncles, and working at his Uncle Ted's hardware store. At seventeen, Rusty lied about his age and enlisted in the Navy. During his first tour of duty aboard the U.S.S. Essex, Rusty was taken under the wing of Chief Petty Officer Fisher. When the Essex stopped in San Diego for shore leave, Fisher took Rusty out with him for a night on the town. After a few drinks in a XXX club, Fisher tried to "make a man" out of the kid by introducing him to Emma la Porte, one of the girls working at the club. Emma pulled Rusty out into the alleyway and threw herself at him. As he got over-excited, Rusty's mutant powers kicked in for the first time, badly burning Miss la Porte. Still on fire himself, Rusty panicked and ran out into the streets, where he was soon picked up by the Military Police and taken into Naval custody.

Furious over what Rusty had done to Emma, Chief Fisher came to Rusty in jail and was prepared to shoot him dead in his cell when Rusty's powers activated again. The pyrotechnic backlash burned the gun out of Fisher's hand and blew a hole through the wall of the jail, giving Rusty a chance to escape. Afraid Rusty would rat him out for his execution attempt if he were recaptured, Fisher decided to call in X-Factor, a newly-advertised mutant deterrence agency to get to Rusty before the MPs did. Little did he know, however, that X-Factor were mutants themselves, the original X-Men who had recently reunited to protect mutantkind from an ever-more hateful mankind. In their secondary role as the mutant X-Terminators, the heroes found and captured Rusty, bringing him in secret back to their compound headquarters in Manhattan. [X-Factor (1st series) #1]

Grateful for his second chance, Rusty began training with X-Factor to better restrain and control his pyrokinetic abilities. It was hard going at first, as Rusty had difficulty adjusting to his abilities, 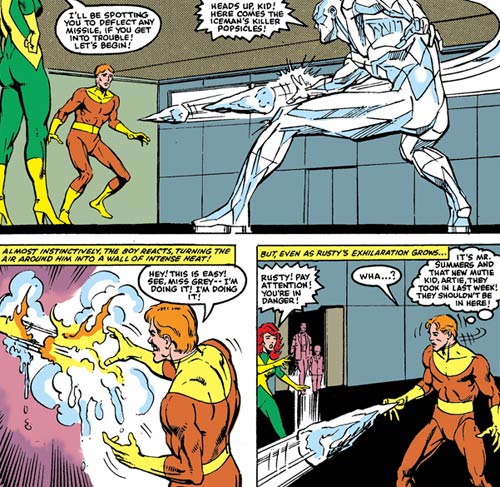 and being a "freak" in general. Rusty's crush on his instructor, Jean Grey, only made him more emotional, and overly critical of his own mistakes. When Scott and the new boy, Artie Maddicks, walked in unannounced on Rusty's training session, he lost control and very nearly firebombed the room. Jean's harsh rebuke only made matters worse, and so Rusty decided to ditch X-Factor, running away in the middle of the night. On the streets, Rusty was approached by Frenzy of the Alliance of Evil, who was prepared to kidnap him for her master. Thanks to Artie's mind-scan, though, X-Factor managed to track them down and fend off Frenzy before she could abscond with Rusty. Back at headquarters, both Scott and Jean apologized to Rusty for their actions at the training incident, and Rusty renewed his dedication to training. He also found a friend for life in Artie, ignoring the younger boy's "freak" appearance and thanking the youth for saving him from Frenzy. [X-Factor (1st series) #4] 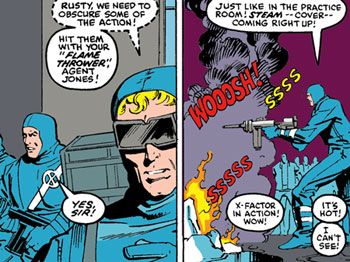 Not long thereafter, Rusty actually managed to join X-Factor on a mission. In an emergency situation, the team needed to publicly expand their roster to maintain the illusion that the X-Terminators and X-Factor were separate organizations. As "Agent Jones" of the mutant-hunting X-Factor, Rusty used his "flamethrower" equipment in a largely staged fight between X-Factor and the X-Terminators. [X-Factor (1st series) #7]

Thrilled at being useful for a change, Rusty suited up for the next mission as well and volunteered to go along with the team. Instead, Cyclops cruelly shot him down (being preoccupied with his own problems at the time), and X-Factor left without him. Dejected, Rusty went back to the room he shared with Artie Maddicks to change. A few minutes later, however, Artie's mental projections detected a group of villains following X-Factor to Central Park. Rusty used the excuse to leave the complex and warn X-Factor in person, hitching a cab over to Central Park himself. Little did he know that was exactly what was expected of him. The ones following X-Factor were Freedom Force, the government's private mutant operatives, and their precognitive agent Destiny had foreseen that Rusty Collins, still AWOL from the Navy and a fugitive from the law, would intersect with X-Factor that night. Lying in wait, Freedom Force attacked X-Factor the moment Rusty caught up with them, planning to charge the "mutant hunters" with harboring a known fugitive.

A fight broke out between the two factions, and Rusty tried to make a quick exit, only to get caught in Spider-Woman's psi-webs. Lucky for him, the Morlock known as Skids was watching his plight and chose to intervene, using her slippery force field to tackle him out of the webbing. Instantly smitten with the girl, Rusty took off with Skids as an angry mob of onlookers started to chase

them.  Eventually tired of running, Skids told Rusty to keep going while she held off the mob, trusting in her force field to protect her. Rusty started to leave the scene, but ultimately decided he couldn't abandon her to the mob, and came back to protect Skids with a firebreak created by his powers. It was here Rusty realized that his uncontrollable fire was a perfect match for Skid's unbreachable force field; she was the one girl he never had to worry about burning. Freedom Force caught up with the pair, though, and so they continued running until they reached a loose grating, where Skids could lead Rusty to safety down in the Morlock Tunnels.

Unfortunately, things weren't any safer underground, as the Mutant Massacre had begun. Freedom Force cornered Skids and Rusty in the tunnels, and Blob began brutalizing the young boy, slamming him head first into the cement walls until he fell unconscious. X-Factor arrived, now in their X-Terminators guise, and the fight began again, as Skids tried to keep the unconscious Rusty safe with her force field. Eventually, Freedom Force fled after Destiny's visions of the massacre became too strong to ignore. [X-Factor (1st series) #8-9]

Rusty was brought back to the X-Factor complex, where a doctor was quickly summoned and, after a cover story was made about how Rusty was an X-Factor operative injured in the field, the doctor managed to stabilize his condition. In the days that followed, X-Factor took in Skids and a number of new boarders, refugees from the Morlock Massacre with nowhere else to live. When the other Morlocks eventually returned to the Alley, Skids stayed with X-Factor partly because of her growing relationship with Rusty. [X-Factor (1st series) #15]

Their flirting almost came to a halt, however, when Rusty was reminded of his past. While reading the newspaper, Rusty learned that Emma la Porte was being transferred to New York for advanced burn treatment. He went to see Cameron Hodge, who had been footing the bill for her medical expenses through the X-Factor organization. Hodge informed him that, due to the financial hardship being forced on X-Factor by Warren Worthington's recent death, they might not be able to continue paying for Miss la Porte's care. Desperate to find some way to help Emma and redeem himself, Rusty went down into the Morlock Tunnels to find the flesh-shifter named Masque, who had briefly stayed with X-Factor after the massacre. Masque hated Skids because her force field made her immune to his touch, and he hated her "Prince Charming" even more. Still, Rusty struck a deal with the nasty sewer dweller: if Masque agreed to fix Emma's face and remove the burn damage, Rusty would allow Masque to permanently disfigure his face in return, as penance.

Without telling them the details of his deal with Masque, Rusty recruited Skids, Artie and Boom-Boom to help him get Emma La Porte out of the hospital and down into the tunnels to Masque. To Rusty's surprise, Miss la Porte was not frightened of him when he approached her in her hospital 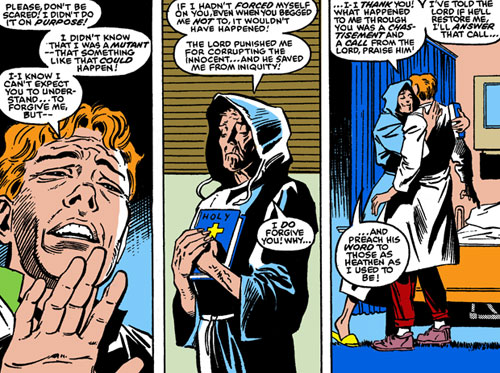 room. It seemed the woman had turned to God after her injuries, and in fact thanked Rusty for helping to turn her towards the path of righteousness. Rusty still insisted on bringing her down to Masque, and the Morlock fulfilled his promise and made Emma even more beautiful than she had been before. Rusty then stayed behind to give Masque his "payment", but Skids realized what was going on and rushed back to stop Masque from disfiguring Rusty. Things became violent after that, as Masque reversed his effect on Emma and began sealing up Rusty's air passages with flesh, leaving him unable to breathe. In order to fight back against Masque, Skids finally managed to will her force field off, and beat him into restoring Rusty. Although Masque ran off before the kids could make him fix Emma again as well, she didn't

mind. Instead, Miss la Porte decided to stay in the tunnels and make an effort towards bringing religion to the Morlocks.  With Rusty's conscience assuaged and Skids able to lower her force field, the two young mutants began playing at having a true romance. [X-Factor (1st series) #16]

After a major battle between X-Factor and the Horsemen of Apocalypse left Central Park frozen inside a glacier by Iceman's powers, Rusty became dead-set on fixing the mess. Iceman had 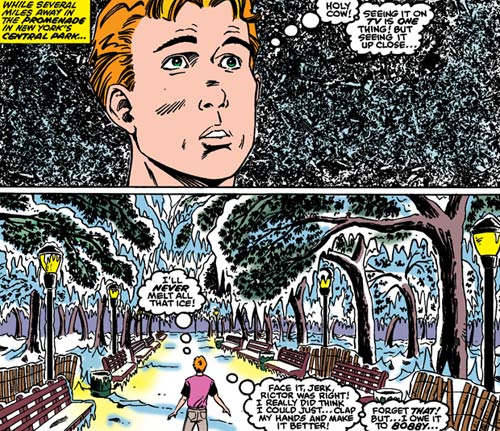 recently broadcast a speech over the airwaves, asking humanity to "Know mutants by their deeds," which really stuck in Rusty's mind. He snuck out in the middle of the night, planning on melting all the snow and ice with his pyrokinetic powers. Skids, Artie and Rictor soon came looking for him, and together the kids managed to restore the entire park, leaving it untouched by the fighting the day before. As a parting gift, they left a giant message in what remained of the ice: "By their deeds you shall know them. Mutants were here." [X-Factor (1st series) #20]