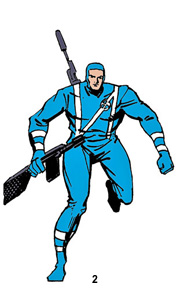 1) As an X-Factor trainee, Rusty was given a simple two-color costume for his practice sessions. The costume was primarily orange and covered him from the neck down. It had a wide, yellow collar around his neck, and a yellow belt. He also wore yellow boots and gloves. [X-Factor (1st series) #2]

2) On at least one occasion, Rusty donned one of the blue X-Factor jumpsuits in order to provide cover for his mentors. These uniforms had simple white, vertical lines along the seams that converged in an "X" on the left breast. Rusty wore his X-Factor uniform with a fake flamethrower in order to disguise the fact that the flames he was emitting were mutant-based. [X-Factor (1st series) #7]

3) When he and the trainees formed a new team of X-Terminators, Rusty and the others created new costumes. He adopted military style pants held up by a large belt, and tucked into reddish-brown boots. Rusty also wore a tight red shirt with a low neckline along the front. A yellow border circled around his neck and extended in straight lines down his arms, meeting a pair of yellow gloves. Later after suffering a head injury, Rusty began wearing a red headpiece. It wrapped around his forehead, down the back of his head and the underside of his chin, while leaving his face and hair uncovered. [X-Terminators #1] 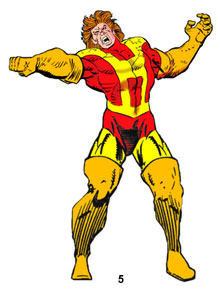 4) Rusty wore two different costumes while working with the MLF. The first was very similar to the then-group design for the New Mutants' costumes. The suit was primarily red, with an open V-cut collar and two epaulets on each shoulder. He also wore yellow boots with three straps on the outside cuffs and a yellow belt held with a large buckle. [New Mutants (1st series) #100]

5) Rusty's second MLF costume was made of several parts red, orange and yellow to symbolize his fire power. The main tunic was red with solid yellow leggings. A yellow belt was connected to two pads on his shoulders by a pair of lines connected by a bar across his chest, like a giant yellow 'H'. He also wore long orange gloves, extending up well past his elbows, and similarly long orange boots, extending up over his knees. [Cable: Blood & Metal #1]